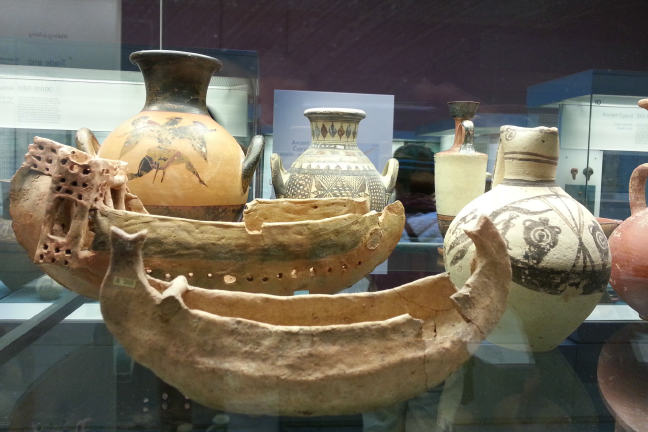 © University of Southampton, 2017. Image used with kind permission of the British Museum.

In 1959 Peter Throckmorton discovered a Late Bronze Age shipwreck off the south coast of Turkey close to Cape Gelidonya, after which the site subsequently took its name.

This discovery was to be a landmark case in the history of underwater archaeology not only for the significant age of the vessel dating as it does to 1200BC, but because it would subsequently form the focus of the first complete excavation of a site underwater using the same methods and techniques deployed by terrestrial archaeologists. This was the first site ever excavated by archaeologists who dived and thus conducted the excavation themselves rather than archaeologists instructing divers from the surface as had previously been the case.

The excavation of the Cape Gelidonya was undertaken in 1960 under the direction of Peter Throckmorton and the young doctoral student George Bass of the University of Pennsylvania Museum of Archaeology and Anthropology. Dr George Bass as he became, went on to become the head of INA the Institute of Nautical Archaeology, Texas A&M and is now known at the grandfather of underwater archaeology partly due to the pioneering work he and Throckmorton undertook at Cape Gelidonya. A small but highly motivated and experienced team of archaeologists and divers from France, Britain and the USA worked hard over the summer of 1960. Cousteau’s diver Fredrick Dumas made sure that diving was conducted to a high standard and further archaeological support was afforded by Honor Frost.

The site was thoroughly mapped and a photo mosaic of the site was produced. Excavation was conducted via airlifts operated from surface support vessels in the form of two sponge diving boats. Each artefact that was exposed was mapped and tagged, placed in lifting baskets and raised through the 28m water column in a controlled manner with the use of lifting bags. Once back at the shore based camp thorough on site first aid conservation was undertaken.

The Late Bronze Age shipwreck at Cape Gelidonya was the earliest shipwreck ever discovered. Its important cargo comprised a number of copper and tin ingots alongside a huge quantity of scrap bonze tools and weapons that appear to have made up the main cargo. Also found were tools for working metal and hence it is believed that the cargo was intended for recycling to make bronze implements. The wreck provided the first ever direct evidence for how this critical metal of the Bronze Age, so rarely seen in its raw form on land, was transported as ingots and recycled. The ship that wrecked at Cape Gelidonya has been interpreted as a merchantman or trading vessel. Sixty stone pan-balance weights provide an insight into the mechanisms of trade on board. Evidence is also provided regarding who was involved in Late Bronze Age trade in the eastern Mediterranean. Mycenaean merchants are present and some personal items such as an oil lamp, hint at individual traders on board including Cypriot, Canaanite and possibly Egyptian crewmen.

The excavations at Cape Gelidonya all those decades ago provided a benchmark. For the first time professional archaeological methodologies were employed underwater by maritime archaeologists, setting standards for future generations that we continue to build on today.