Here we discuss how film sound can be used to establish scenes, places, and spaces, especially in opening scenes.

If you remember the article on ‘Cs and Ss’ earlier in Week 1, from the Ciné-minis Booklet - Thinking About Film download in Step 1.5, you’ll recall that two of the ‘Ss’ were Sound and Setting. This already suggests a close relationship between the two concepts - that film sound plays a very important role in establishing a place, a time, a period, a space, an environment. The soundscape in the first minute of Taps is intriguing - if you listen without the images, can we tell if we are indoors, or outside? In a big lonely house, or a playground? Is anyone else in the setting? Nothing prepares us for the fact that the dripping taps are actually the characters…

In this step, we’re going to ask you to listen again to the sound clip from Step 1.8 and ask you to use the Sound ‘Tell Me’ grid, which we’ve attached in the downloads section. This time, focus on the information that the soundtrack (music, silence, sound effects, dialogue) provides us about setting, rather than listening just to the music. And remember, setting is time - of day, year, season, period - as well as space. When you’ve listened and made a few notes on your ‘Tell Me’ grid, share your responses in the comments section below. 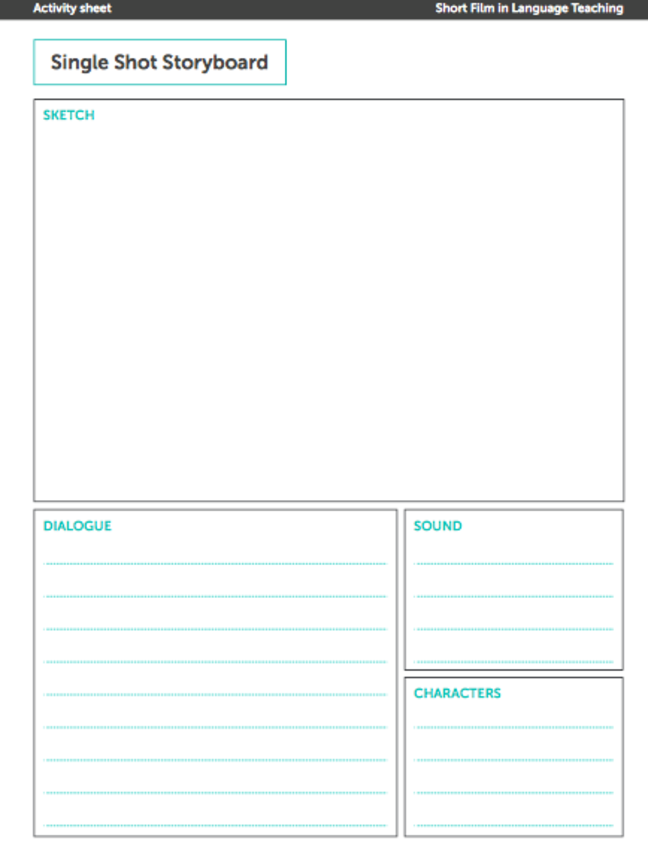 A single shot storyboard, as it sounds, is a frame for sketching an idea for a scene or shot, with boxes for adding information - about character, for example, or any sound effects. It can be offered to learners as a way of encouraging them to present what they are imagining, as a prompt for more formal writing or speaking. We have added a Single Shot Storyboard Template in German as an example of how this resource can be adapted for language learning. Please feel free to use it in class.