This content is taken from the Griffith University's online course, Written in Bone: An Introduction to Forensic and Bio-archaeology. Join the course to learn more.
View course
1.13

0:07Skip to 0 minutes and 7 seconds Well, this segment, I’d like to introduce Dr. Stewart Fallon, who is the head of the Radiocarbon Dating Laboratory at the Australian National University.

0:22Skip to 0 minutes and 22 seconds The first step is to drill the bone and collect the powder. We then do tests that verify the bone is suitable for dating.

0:33Skip to 0 minutes and 33 seconds In the chemistry laboratory, we dissolve the bones with the dilute acid so we can isolate the collagen. The collagen is the organic protein in the bone that is the most robust and most suitable for radiocarbon dating.

0:50Skip to 0 minutes and 50 seconds So the next step is we take the clean collagen sample, and we freeze dry it to remove all of the water from the sample. After freeze drying, we end up with nice, pure, clean, fluffy collagen. The next step is we have to convert the collagen to carbon dioxide. And to do this, we weigh out 2 milligrammes of collagen, and we loaded into a quartz tube.

1:29Skip to 1 minute and 29 seconds Inside the quartz tube, we add copper oxide and silver. Copper oxide provides oxygen to generate the carbon dioxide. Now, we load the sample on a vacuum line, where we evacuated all of the air out of the quartz tube. We then use a flame torch to seal the tube with our pure collagen and sample inside. We next put the samples into the oven at 900 degrees for six hours. This is to make CO2 inside the quartz tubes.

3:22Skip to 3 minutes and 22 seconds Now, we will load the samples into the accelerator mass spectrometer. Our simple wheel holds 39 samples. Inside we have a mixture of standards, secondary standards, blank samples, and our unknown samples.

3:43Skip to 3 minutes and 43 seconds Let me show you how the accelerator mass spectrometer works. Our graphite samples are inside our ion source. In the ion source, we heat up cesium, which is a metal. The positive cesium ions interact with the graphite, and generate negative carbon ions. These ions are accelerated to 44,000 volts. The ions are then separated in a magnetic field, or a mass spectrometer, where we can separate out carbon-12, carbon-13, and carbon-14. The ions and molecules, which are also in the beam, are further accelerated to 245,000 volts. The ions and molecules then go through a cloud of helium gas, where all the molecules are broken up.

4:36Skip to 4 minutes and 36 seconds The beam then goes through another magnetic field, or the second mass spectrometer, in the accelerator mass spectrometer, where we can measure carbon-12 and carbon-13. Carbon-14 is further filtered by an energy philtre, and we measure each carbon-14 atom as it hits a silicon detector.

The Carbon 14, or radiocarbon dating method is one of the best-known methods of dating human fossils and has been around since the late 1940s.

The Carbon 14 (14C) dating method is a radiometric dating method. A radiometric dating uses the known rate of decay of radioactive isotopes to date an object. Each radioactive isotope has a known, fixed rate of decay, which we call a half-life. The half-life is the amount of time it takes for a quantity to fall to half of the value that it started with.

The element carbon occurs in nature in three isotopic forms. Carbon 12 (12C) is stable and represents 98.9% of the carbon in the atmosphere. The rest (1.1%) is mostly made up of Carbon 13 (13C), which is also stable, and Carbon 14 (14C) which is unstable – or radioactive. In our atmosphere, only about one in a trillion carbon atoms is 14C.

Most of the 14C in our atmosphere is produced in the upper atmosphere by the action of cosmic rays on nitrogen (14N) to produce 14C. Once 14C is produced, it starts to decay back to nitrogen. The atmosphere has constant levels of 14C – the production of new 14C in the atmosphere and the decay of 14C balance each other in a steady state equilibrium.

These three different forms of carbon are oxidised and dispersed through our atmosphere. The oxidised carbon is absorbed by plants through photosynthesis. Once it is in the plants, it enters the food chain. When the 14C enters the plant or animal, it remains in equilibrium with the atmosphere. However – once the tissue dies (i.e. the animal dies or a tree’s sapwood converts into hardwood) then the tissue is no longer being replaced and the level of 14C continuously decreases through radioactive decay. 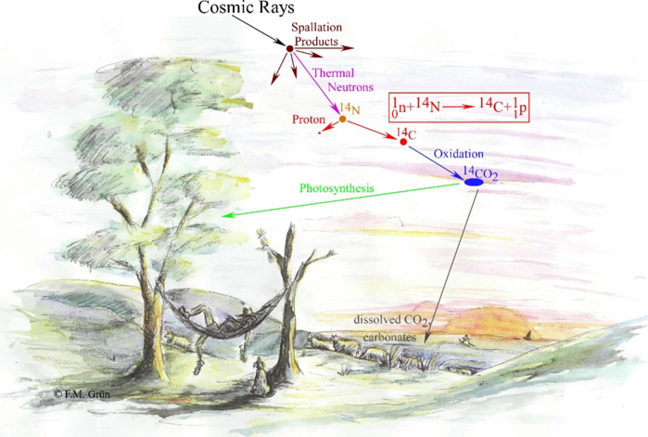 If we know how much 14C was in the living tissue, we can measure the amount of 14C in the dead plant or animal and then compare these to assess how long it has been dead. We can do this because we know the decay rate of 14C (it has a half-life of 5,730 years). The result is the radiocarbon age of the sample.

The next question, of course, is – how do we know the amount of 14C that was in the living tissue when it died? Well, this isn’t simple to determine. As it turns out, the production of 14C in the atmosphere has not been constant over time, because of fluctuations in the amount of cosmic rays reaching the earth. We’ve been able to confirm this by measuring tree rings and comparing their known age with the radiocarbon result. This allowed us to create carbon calibration curves. However, our tree ring chronology only goes back 12,000 years (look up dendrochronology if you are especially interested in this aspect of dating). So, we’ve had to use other materials such as corals, speleothems, lake sediments and ice-cores to create calibration curves for radiocarbon dating. We are working hard to extend these calibration curves as much as possible – currently we are at around 55,000 years.

Remember that we said earlier that the naturally occurring amount of 14C in the atmosphere is about one in one trillion carbon atoms? That’s another challenge. In such small amounts, 14C is very difficult to measure and it is also very sensitive to contamination. When we first started using radiocarbon dating, huge samples were required. Today we use (very expensive) accelerator mass spectrometers (AMS) to count 14C atoms in a sample. And we are also constantly researching new methods of sample preparation to help reduce the likelihood of contamination.

When using radiocarbon dating for more recent dating, we also need to take into consideration recent human activities that have changed the global levels of 14C. These are the burning of fossils fuels (called the “Suess effect”) and testing of nuclear weapons (called the “bomb effect”). The Suess effect has lowered the radiocarbon concentration in the atmosphere. The Bomb effect has dramatically increased it. Studies have put this increase as high as 100% by 1963 (Baxter and Walton 1970). These effects mean that radio carbon dates need to be calculated to a “pre-bomb” age of 1950. Tested material that has died since 1950 have levels of radiocarbon that is so high that their ages are reported as a “percent modern (1950)”.

All of this combines to produce dates that can be difficult to assess as correct. Certainly, a single radiocarbon dating of a specimen should be treated with caution.

Do you think radiocarbon dating is a valid method of dating human remains?