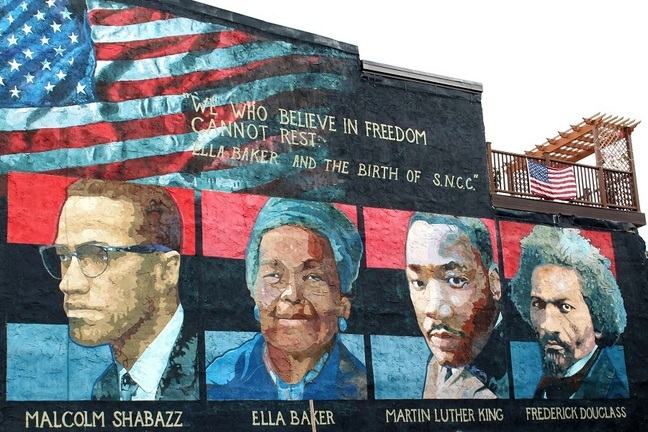 Around the world, artists have worked with activists and communities to remember 18th and 19th-century abolitionism, often connecting this history to the modern struggle for social justice.

Please explore a new digital map that brings together American murals about slavery and antislavery for the first time. The map was created by University of Nottingham PhD student Hannah Jeffery, who is part of the Antislavery Usable Past team behind this course. Although inventive and initially cherished, these murals are ephemeral and sometimes neglected or destroyed. In some cases, the photographic documentation at Hannah’s map is our only record of their existence.

You can also read about a particular collection of murals that feature the black abolitionist Frederick Douglass and view these murals in close-up, in a gallery supported by the Arts and Humanities Research Council and created by one of the course educators, Professor Zoe Trodd.

Tell us in the comments any observations about these murals. Where do they seem to appear most - neighbourhood walls, schools, government buildings, prisons, or elsewhere? What themes do they have - what connections are they making between slavery and civil rights, educational equality, labour rights, women’s rights, or other issues? Which 20th and 21st-century figures seems to appear most often alongside 19th-century antislavery figures - Martin Luther King, Jr., Malcolm X, President Obama, etc - and what do you think about this attempt to bring together past and present? Most importantly, please link in the comments to any other murals you know about. Perhaps there are murals in your own town or city that we don’t know about. Perhaps you have seen murals featuring themes of slavery or antislavery in other cities you have visited that aren’t on the map. If there isn’t a link online about the mural you want to share, just tell us the location and we’ll track it down. We plan to expand Hannah’s map beyond the United States and gather slavery/antislavery murals from around the world, so we would love to know about any and all murals.