This content is taken from the The University of Nottingham's online course, Ending Slavery: Strategies for Contemporary Global Abolition. Join the course to learn more.
View course 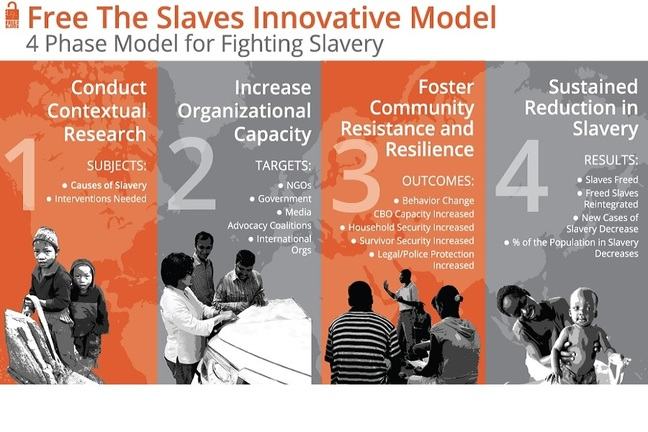 © Used with permission of Free the Slaves

The antislavery movement needs evidence-based models that yield significant, sustained declines in the prevalence of slavery.

Free the Slaves has developed a community-based model for fighting slavery that it has deployed, with adaptation, in six countries. The model focuses on identifying and supporting at-risk communities so they acquire the intellectual, organizational, legal, political and physical assets that reduce vulnerability to slavery and liberate those in slavery.

Please read the model, which is available from the downloads section of this page, below.

After reading the model, please watch the film Formula for Freedom, which uses a different format to explain the Free the Slaves community-based model for fighting slavery. It describes the four-step formula that guides the organisation’s work to bring entire communities from slavery to freedom, and applies principles of social science, economics, community organizing, rights education and effective policing. This approach has freed more than 10,000 people from slavery.

Finally, please also watch the short film What Freedom Looks Like, to see what freedom looks like. Villagers in the Indian village of Sakdouri were beaten as slaves at a local brick furnace but after a self-liberation supported by a grassroots partner of Free the Slaves, they are now free.

Tell us your responses in the comments. Why does this community-based model work so well? What are the key ingredients, without which it would not work effectively? And are there other elements that groups like Free the Slaves should consider introducing, that might help to improve the model even further?

The Sharia and Islamic Law: An Introduction

Discover Sharia and Islamic law, and learn more about some of the diverse roles they play in Muslim life.