0:01Skip to 0 minutes and 1 second Jean Burgess: Mapping the Australian Twittersphere is a long-term project in the QUT Digital Media Research Centre, one which seeks to identify all Australian Twitter accounts.

0:10Skip to 0 minutes and 10 seconds Axel Bruns: We first examined all global Twitter accounts - roughly 870 million when we last did this. We filtered them by what they said about themselves in their profiles; what location and description they had set, and what timezone they were in. Not everyone fills this in, but for many accounts at least one of these markers is set.

0:27Skip to 0 minutes and 27 seconds Jean Burgess: Filtering for identifiably Australian cities, states, and timezones left us with some 2.8 million Australian Twitter accounts, more than 12% of the Australian population. We then retrieved the follower networks for these accounts, and filtered the network to only include users who had at least 1000 connections in the network. This resulted in 140,000 accounts, with 22.8 million connections amongst them. We mapped these relationships using Gephi, the same tool that you’ll be using in this course.

0:58Skip to 0 minutes and 58 seconds In the map, each dot represents a single account: the larger, greener dots are the accounts with the most followers in the network.

1:04Skip to 1 minute and 4 seconds They’re placed on the map according to how they’re connected with each other: Groups of accounts with lots of connections amongst each other are placed close to one another, forming a dense cluster, and groups and clusters that do not have many connections in common are much further apart. This then allowed us to qualitatively analyse the network clusters, and for each cluster examine what the central accounts were. From this we could infer what themes and topics drive those clusters, from politics to entertainment and beyond.

1:31Skip to 1 minute and 31 seconds Axel Bruns: For instance, there is a fairly large politics cluster, which is also positioned fairly closely to journalism and news. This isn’t too far away from the sports cluster, which further subdivides into the various sports that are popular in Australia, because fans of Australian Football aren’t necessarily also fans of motor racing, and so on. Further, there are various clusters related to business, lifestyle, the arts, and food culture, with the latter subdividing into good eating, wine, beer, and food tourism.

2:00Skip to 2 minutes and 0 seconds Jean Burgess: That’s why Adelaide, as a major destination for food tourism, is also close to this region of the network. That’s not to say that other accounts in the network aren’t also interested in good food,

2:10Skip to 2 minutes and 10 seconds but these are the accounts who take a full-time and often professional interest in these topics: they represent food growers, restauranteurs, craft brewers and wineries. Quite separate from this is the teen culture cluster on the right of the map. This represents a strong and very active community of accounts that follow and talk about major teen acts from One Direction to Five Seconds of Summer, and we think they’re there because their idols have specifically encouraged them to join them on Twitter.

2:37Skip to 2 minutes and 37 seconds Interestingly, this group of accounts arrived a few years later than the rest of the network: while much of the Australian Twittersphere formed in 2009 and 2010, most of these accounts only arrived from 2012 onwards.

2:50Skip to 2 minutes and 50 seconds Axel Bruns: This map is interesting in its own right as it tells us who and what is represented in the Australian Twittersphere, and what topics are absent. We can also see how different themes are related, how much overlap there is between politics and business, for instance, and how much less there is between politics and teen culture. This tells us something about broader groups in society, too.

3:10Skip to 3 minutes and 10 seconds Jean Burgess: But beyond merely mapping these follower networks, we also use this map as the basis for tracing user participation in current public debates and activities. When major news breaks, for instance, which parts of the network activate to talk about it? Does a political crisis only get take-up from the usual suspects in the politics cluster, or does the wider Australian user population also get involved? The answers to such questions provide us with new insights into the dynamics of such major events in Australian public life. There is ongoing work in updating the map. As we can see from the late arrival of the teen culture cluster, new accounts are added over time, and older ones may disappear.

3:49Skip to 3 minutes and 49 seconds These userbase dynamics can tell us a great deal about how Twitter is evolving as a platform for public conversations, and what role it plays in Australian society. 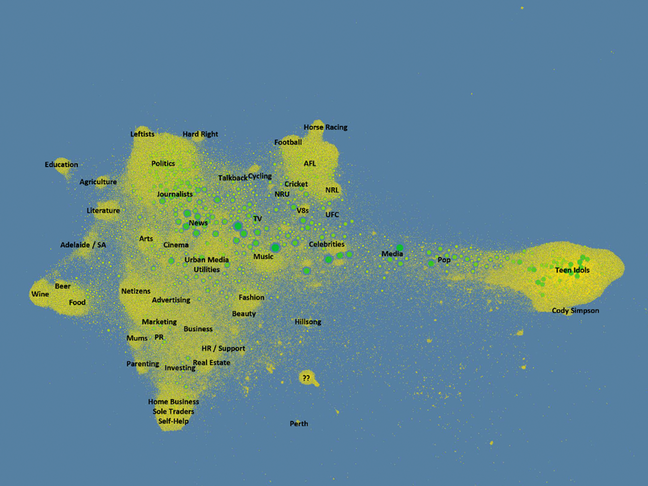