Model fitting and the registration problem

We have seen that model fitting is an important first step in analysing new shapes by comparing them with the shape model. In this article, we show that the problem of fitting a model to a new shape arises also in the process of model building itself, namely when correspondence has to be established between the example shapes. In this context, model fitting is known as registration. Here, we will discuss the difference between registration and model fitting, briefly sketch the most common registration approach and point the interested reader to further literature.

The key idea in statistical shape modelling is to estimate a distribution for the shape deformations from a set of example shapes . So far we assumed that we are given a reference shape and a set of deformations fields , where each deformation field defines a mapping between every point of the reference shape and the corresponding point . This allowed us to estimate the shape variations by means of a Gaussian Process defined by the sample mean and sample covariance of these deformation fields.

In Week 4, we learned how to define Gaussian Process models that model shape deformations without resorting to example data. Using such a model in combination with the standard ICP algorithm allows us to find the deformation field. Although the algorithm works unchanged with such generic smooth deformation models, it becomes less robust in general compared to statistical deformation models, because the model no longer enforces that only hand shapes are represented. Figure 1 (left) shows the result of applying the ICP algorithm using a simple Gaussian kernel to model smooth deformations. You can see easily that the algorithm is unable to successfully establish correspondence at the fingertips. The situation is improved by including known deformations into the model by means of Gaussian Process regression and the resulting posterior model. Figure 1 (right) shows the result when the deformations at the given landmark points (the red and blue points) were used to build aposterior model, which was then used in the algorithm. 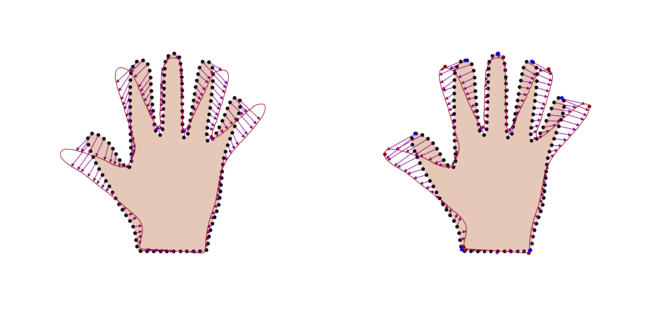 In the literature, registration and model fitting have usually been treated as two separate problems. Instead of being treated as the task of fitting a model of smooth deformations, registration is usually formulated as an optimisation problem

A detailed discussion of registration would go beyond the scope of this course. We refer the interested reader to the papers [1] and [2] for a more detailed introduction to surface and image registration respectively.

We also highly recommend the paper by Steinke et al. [3] that explains the connection between the regularisation approach and the Gaussian Process view in an easy and accessible way, using only concepts from linear algebra.