0:06Skip to 0 minutes and 6 seconds I guess I’m a lifelong enthusiast for stereoscopic images.

0:14Skip to 0 minutes and 14 seconds And, there was a time when anything stereoscopic would find its way into my collection. And then I got a little bit more choosy after that and sort of zoomed into 1850s and 1860s. Then I’m zooming in even further amongst all this stuff, there were a few scenes. They were called Scenes in Our Village, and they were actually titled as such on the back. And I remember asking people, where do they come from? who did this? Well, they’ve got TRW on them, and we could figure that this was T. R. Williams because sometimes there’s a signature. But apart from that, you could probably write two sentences about what was known about T. R. Williams at the time.

0:52Skip to 0 minutes and 52 seconds In fact, the theory was at the time that it was just generic, and there was a number of villages and somebody went around and just took pictures of villages and put them together. But I started to look and I realised that the same people appeared in a lot of these pictures and some of the same little thatched houses would appear. There was one particularly distinctive church. So I went around for 20 years, if I was in the country, looking for this church. The days of the internet were a lot later and I thought, hmm, somebody out there must know where this church is. Somebody lives next to this church.

1:23Skip to 1 minute and 23 seconds So I put a picture of it up on my website and within, I think, 24 hours, I had three people tell me where it was. I got in the car and went down into Hinton Waldrist, this little village in Berkshire, got out the car, and there was the church that I’d been looking for. And we did a lot of research to find out as much as we could. We eventually even found, for instance, the gravestone of one of the people who appeared, John Sims At His Pigsty. We found his gravestone in the church, which was a real thrill. So, that was T. R. Williams.

1:56Skip to 1 minute and 56 seconds There’s a lot more to the story, it turns out that he was connected with the village as a child. So he was speaking about his home. And on the back of each card, there’s a little poem which expresses not just what you’re looking at, but an insight into the hopes and dreams and beliefs of the people who are in the picture. It’s a very profound piece of art, I think.

Dr Brian May on TR Williams: Scenes in Our Village

In this short video, Dr. Brian May CBE, Director of The London Stereoscopic Company, expresses his enthusiasm for stereo photography and solves the mystery of the church, seen through the trees in this photograph (below) by TR Williams in his ‘Scenes in Our Village’ series. 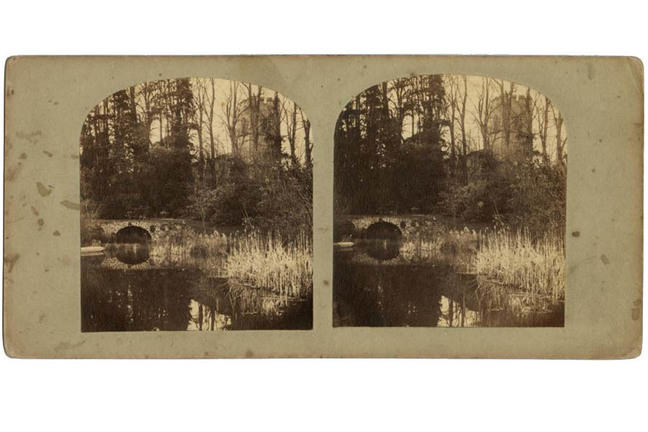