This content is taken from the University of Liverpool's online course, Understanding Superstructures. Join the course to learn more.
View course 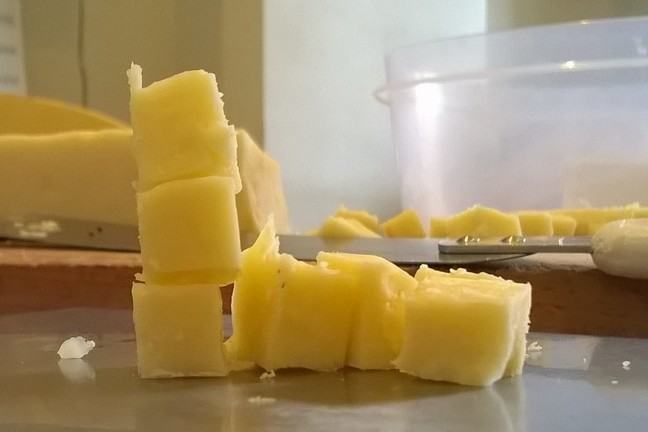 You should be able to perform this exercise in your kitchen using the equipment usually found there plus a block of processed cheese.

To estimate the critical height of a tower at which its collapse behaviour changes mode.

You will need a sturdy table or bench. A handy-sized spatula with a smooth, flat, rigid surface1. A set of kitchen scales with a flat horizontal surface2. A block of hard, processed cheese cut into about a dozen 1cm3 cubes – use the cheapest, most processed cheese available3.

In an ideal world, your tower should be in static equilibrium so that it will not topple over and it would always fail by a cube being crushed. However, we do not live in an ideal world and either your tower will not be perfectly vertical (especially if you did not cut your cubes carefully) or the applied load will not be exactly vertical and at the centre of the tower, or both. Consequently, there is always some magnitude of force causing a moment and a rotational deformation on the tower. The sensitivity to toppling increases as more cubes are added to the tower until eventually the external force required is zero and the gravitational force on the cubes is sufficient to cause collapse of tower, as it seeks to minimise its potential energy.

What were the critical heights of the tower at which its failure mode changed? How did the failure load change as the tower became taller? How accurate was your experiment? You could repeat each step six times (using fresh cubes) to obtain six values for each parameter and then plot the mean value, in which case the standard deviation on this mean will be an indication the error in the experiment.

How did you do?

We would love to know your results, you can post them in the comments section below.

Why not take photos of you carrying out your experiment and then post them to our media wall? You can also add a video to the media wall by uploading it to YouTube (or another social media site) and then cutting and pasting the embed code.

Remember to add your name and the experiment you are doing!

2 I used a flat digital scale similar to this one: http://www.amazon.co.uk/Salter-1036-Electronic-Kitchen-Silver/dp/B001MF3C4S

3 I used a block of processed cheddar cheese [about 250g] and a large sharp knife to cut it into cubes. It took several attempts to achieve regular well-formed cubes.