Logistics goes back a long way. The invention of the wheel allowed people to transport items between communities. Initially those communities will have grown and eaten their own food. With the introduction of transport, villages were able to trade with other villages and this is how global trade started.

The term logistics however was mainly used within the military.

The map below shows the main trade routes between China and Europe. They were called the Silk Road although other products were also moved such as spices and food products. These routes were also responsible for the spread of disease across the continents. 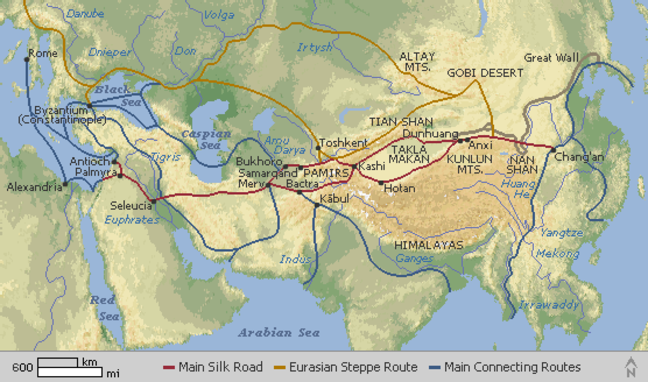 In the early days, as can be seen on the above map, goods were moved by road and also by sea on certain trade routes.

Road movements from China to Europe were then superseded by sea. Today, depending on the urgency of the shipment, goods travel by :

The quicker the transit time the more expensive it becomes.

Today China has an initiative called ‘One Belt, One Road’ which was launched by President Xi Jinping in 2013, to focus on improving and creating new trading routes, links and business opportunities with China, passing through over 60 countries along the way, across Asia, Europe, the Middle East and Africa.

This is an update on the Chinese “One belt, One Road” initiative, and this video on the first freight train from China arriving in London.