This content is taken from the Coventry University's online course, Sustainability and Green Logistics: An Introduction. Join the course to learn more.
View course
1.11

What are the main instruments of international legislation that aim to prevent, reduce and control pollution in accordance with the remits of the Brundtland report and other United Nations policies?

You will learn about them in this step.

Law is order, and good law is good order.

What is international environmental legislation?

During the last few decades, a plethora of international legal restraints and obligations have been introduced in the form of multinational and bilateral agreements as a measure against environmental damage transcending national boundaries (Schachter 1991). They deal with different forms of harm and risk, the duty of states to inform and consult, conflicting interests, liability and compensation, enforcement and remediation.

The most notable intergovernmental meeting, which asserted the completing principles of international responsibility and national authority within a general framework of international rights and obligations, was the 1972 Stockholm conference (which eventually led to the Stockholm Declaration). The Declaration proclaimed in Principle 21 the responsibility of all states:

…to ensure that the activities within their jurisdiction and control do not cause damage to the environment of other states or areas beyond the limits of national jurisdiction.

It also recognised the:

…sovereign right of states to exploit their own resources pursuant to their own environmental policies.

In addition, the declaration proclaimed in Principle 22 the need to develop a body of law to give effect to Principle 21. Principle 22 called on states:

…to develop further the international law regarding liability and compensation for the victims of pollution and other environmental damage caused by activities within the jurisdiction or control of such states to areas beyond their jurisdiction.

The breadth of international environmental legislation

Since the 1972 Stockholm Declaration, a plethora of international laws, rules, standards, resolutions and other texts have been published to assert state obligations in terms of transborder environmental harm prevention, reduction and control, and clarify the obligations of neighbouring states (good neighbourliness principle). These laws regulate the pollution of rivers, lakes, oceans and seas, excessive fishing, transfrontier fumes, the transport of dangerous substances and the disposal of oil and radioactive waste (Schachter 1991).

Pollution control refers to the:

…control of emissions and effluents into air, water or soil

and includes any means employed:

…to limit the damage done to the environment by the discharge of harmful substances and energies.

Examples of international pollution control laws that have come in force since the Stockholm Declaration can be found in the following table: 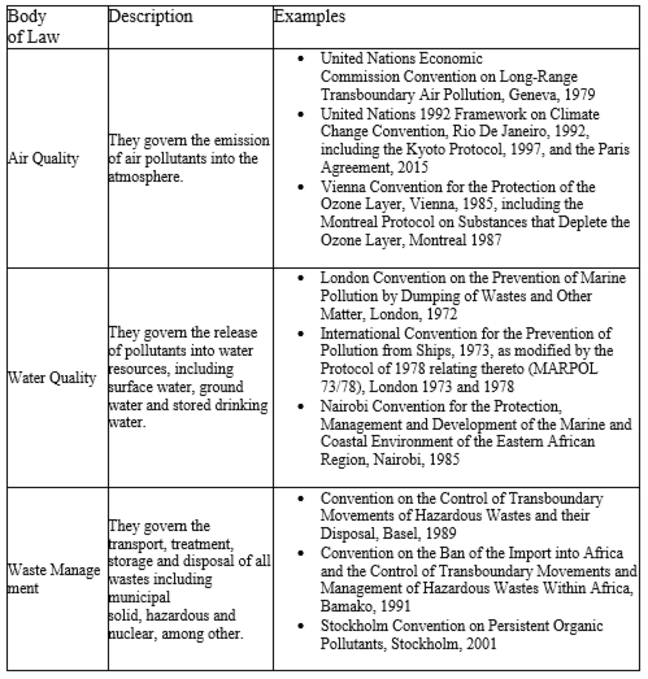 In the hierarchy of controls, natural resources conservation is more desirable than pollution control. Resource conservation refers to the sustainable use and management of natural resources including water, air, wildlife and earth deposits and includes both pollution prevention and waste minimisation interventions. According to the US Environmental Protection Agency, pollution prevention is:

…reducing or eliminating waste at the source by modifying production processes, promoting the use of non-toxic or less toxic substances, implementing conservation techniques, and reusing materials rather than putting them into the waste stream.

In the same context, waste minimisation refers to the:

…use of source reduction and/or environmentally sound recycling methods prior to energy recovery, treatment or disposal of wastes.

Nowadays, a long list of regulatory and planning instruments encompassing requirements, prohibitions, plans and programs have been developed to promote behaviour patterns and actions that are resource conservation-oriented (German Environment Agency 2019). Examples of such regulatory instruments can be found in the following table: 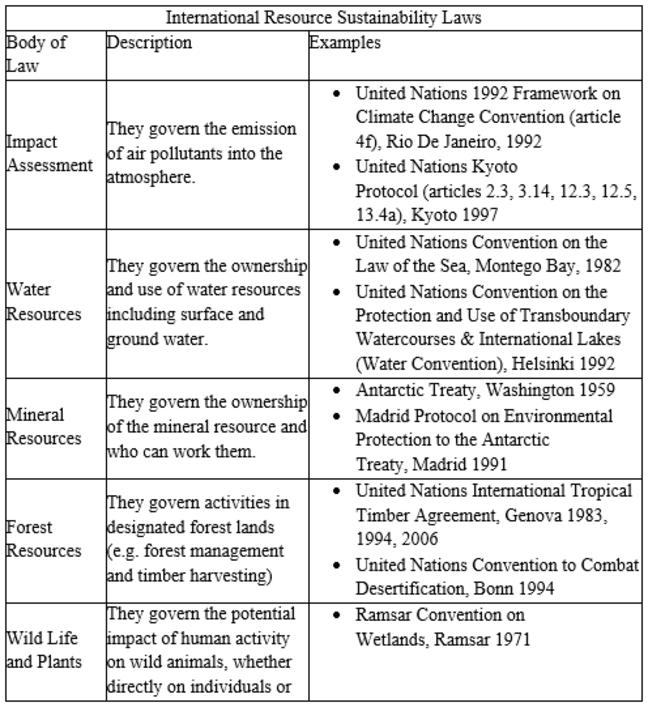 Are there any other laws that your country could have ratified but hasn’t? Why?

Share your findings with your classmates in the comments section below.