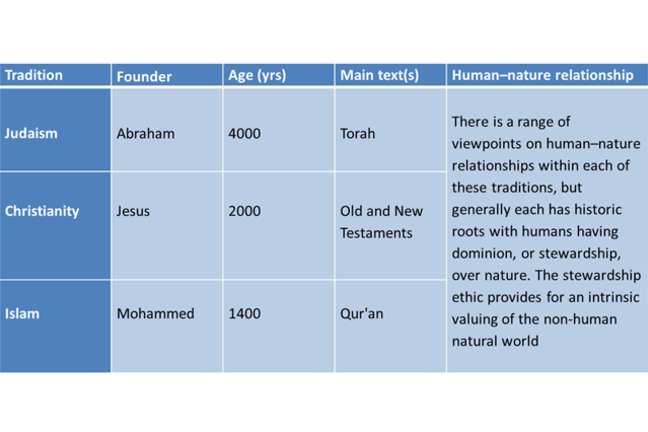 © adapted from OpenLearn under a Creative Commons Attribution-NonCommercial-ShareAlike 2.0 Licence http://openlearn.open.ac.uk/mod/oucontent/view.php?id=397996&section=1.2

Following the Enlightenment, the idea of a human duty of care towards the natural world has been replaced with a more despotic version of dominion with humans at its centre. Judaism, Christianity and Islam can all be interpreted as anthropocentric religions; that is, focussed upon humans.

Anthropocentrism is not necessarily the ‘norm’. Archaeological evidence demonstrates clearly that many societies in the past were more ecocentric, making no distinction between culture and nature – neither concept appears to have existed. Instead people, along with all other organisms, inanimate entities, were an integral part of the whole environment.

Anthropologist Tim Ingold has highlighted how similar views are held by many modern hunter-gatherer groups, who tend to have an intimate, familial relationship with their environment, perceiving their surroundings as a ‘mother’ or ‘father’ that provides warmth, shelter and clothing. These groups have no conception of ‘nature’ and certainly do not perceive that humans are superior to it. Indeed, the views of the Koyukon of Alaska have been summarised thus:

“The proper role of humankind is to serve a dominant nature. The natural universe is nearly omnipotent and only through acts of respect and propitiation is the well-being of humans ensured…human existence depends on a morally based relationship with the overarching powers of nature. Humanity acts at the behest of the environment” (Nelson 1983, 240 cited in Ingold 2000, 68).

In the modern West there tends to be a hierarchical, anthropocentric worldview where nature: culture opposition dominates. This can be compared with the flatter, integrated and ecocentric perspective common to many hunter-gatherer groups.

Others are beginning to reach similar conclusions and suggest that we should look to hunter-gatherer societies (both past and present) in order to re-learn some of the values that were lost with the advent of farming.

This is not to suggest that we should abandon our farming lifestyles, especially since many farming societies today hold similar worldviews to those of hunter-gatherer communities.

Western observers often regard indigenous cultures, and particularly their ideas of animism (attributing agency to non-human others), as being ‘primitive’ and hence inferior.

“This strikes me as profoundly arrogant. It is to accord priority to the Western metaphysics of the alienation of humanity from nature, and to use our disengagement as the standard against which to judge their engagement. Faced with an ecological crisis whose roots lie in this disengagement, in the separation of human agency and social responsibility from the sphere of our direct involvement with the non-human environment, it surely behoves us to reverse this order of priority.”

Of course, not all ‘indigenous’ populations or even individuals within those groups may share these ecocentric perspectives. In the same way, it would be misleading to caricature all of Judeo-Christianity as essentially anthropocentric in its narrative regarding nature.

There are likely to be variations of perspective within as well as between different cultural traditions. What is important, though, is the influence of spiritual traditions on the quality of conversation; how we converse not only with non-human nature but also between human cultures.

The belief that we can learn from indigenous peoples has seen growing emphasis placed on ‘Traditional Ecological/Environmental Knowledge’ or TEK.

Attitudes to ‘Nature’ have changed through time, in particular with the rise of a worldview in which humans perceived themselves as separate from, and superior to, their environment. It is worth considering how these changes in worldview correlate with the climatic shifts associated with global warming – is it a coincidence that the two follow very similar temporal trends?

Not all societies today share the Western worldview of nature. It is possible that these groups, as well as those from pre-Enlightenment periods, may have ecocentric knowledge that the West should learn from as it moves forward into a period of instability, brought about largely by its own anthropocentric worldview.

Think about: This article asks if it is a coincidence that our attitudes to ‘Nature’ have changed during the same period that we have seen the climatic shifts associated with global warming. What do you think? Is it a coincidence that the two follow similar temporal trends?