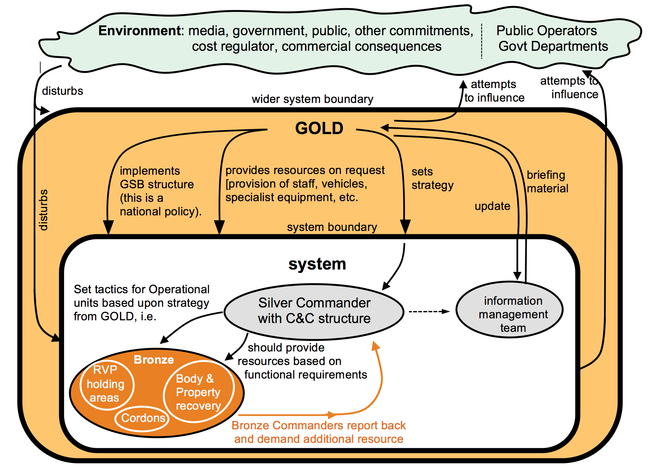 A Formal Systems Model representation of the GSB C&C system.

This application of the Formal Systems Model sees:

Gold makes decisions and provides resources that it believes will enable Silver to self-organise in response to unpredictable events as they unfold. In other words, Gold determines the strategic direction that constrains Silver – unless and until Silver requests otherwise.

The expectations are provided by the setting of tactical doctrine (as orders and directions) which is passed down to the transformation sub-system (Bronze functions). In relation to the provision of resources and legitimization of operations, the decision-making subsystem is seen to act in a fashion analogous to that of the wider system. Through tactical command exercised within the decision-making subsystem, the activities carried out by the Bronze functions (the subsystems that carry out the transformations) amount to the design of the transformation subsystem.

Considering the provision of performance information, it can be expected that information in respect of the state of activity and operations will be passed from the Bronze functions to Silver, either on demand or voluntarily as part of the management of the incident or event. There is no separate performance monitoring subsystem reporting back to both Silver and Gold that is able to act as a comparator between the expectations of the decision-making subsystem and the performance of the Bronze functions. However, some form of performance monitoring must take place within Silver as part of its decision-making process.

Learn how supply chains work in the digital era, and how you can make them more effective and efficient.