This content is taken from the University of York's online course, Tackling Environmental Challenges for a Sustainable Future. Join the course to learn more.
View course
2.21 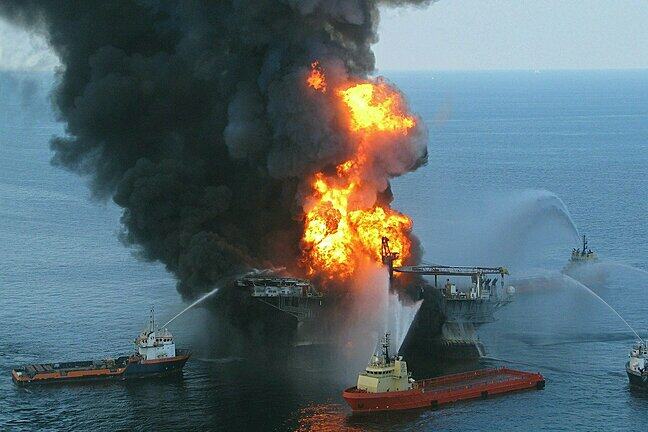 Throughout recent decades there have been a number of high profile oil spills that have occurred and the imagery of their effect on marine life is difficult to forget. Whether it is sea birds covered in oil which lose the ability to fly, or massive fish kills and dead animals washing up on beaches, the impacts of oil spills can be massive. But did you know that oil spill accidents are only a small fraction of the oil that enters the ocean? Did you know that the relatively short lived yet tragic impacts of oil slicks, the accumulation of oil on top of water bodies due to differences in density between oil and water, only represent one aspect of the effects of oil spills? In this step we will learn more about the interaction between oil and ocean health.

As we have discussed throughout this activity on marine pollution, the pathways that chemicals take to enter the marine environment are important and also diverse. In terms of oil, there are a few major pathways that are most important. Oil forms as the result of organic material decomposing under pressure over thousands of years. The fact that oil reserves remain under intense pressure is important. Over time cracks in the earth’s crust are exploited by crud, or unrefined, oil under pressure forcing it to the Earth’s surface. It is this pressurized force that is used to extract oil when the cracks are made intentionally, e.g. drilling.

However, when these cracks develop naturally and in the earth’s surface that is under water, which happens to be the case for the majority of Earth’s surface, oil is thus free to seep into the ocean. The natural release of oil, known as seepage, into the ocean has been estimated to account for 47% of all the oil in the ocean. In comparison, oil spills, such as the ones that receive so much attention, accounts for only an estimated 8 %. However, these high profile accidental spills result in a very concentrated exposure, and the impacts are tragic, and obvious.

The remaining contribution of oil in the ocean comes from the routine exposure from land-based discharges that end up in oceans via runoff as well as the operational release of oil products inherent in the everyday use of boats and ships.

Oil is a complex mixture of thousands of different chemicals. The dominant chemicals associated with oils are called hydrocarbons which are composed exclusively of hydrogen and carbon. The size and shape of hydrocarbons are very important to understand the impacts of oil spills. Hydrocarbons can either be arranged in short to mid length chains known as alkanes, or arranged in rings knowns as aromatics. Aromatic hydrocarbons are the most toxic to marine ecosystems. Alkanes can be readily degraded by microbes where they are broken down and used as a food source.

Single 6-carbon rings, like benzene and toluene, are common and toxic chemicals hydrocarbons in oil. However, these chemicals are volatile and do not persist for long periods of time. On the other hand, multi-carbon ring structures, known as polycyclic aromatic hydrocarbons often called PAHs, are both toxic and persistent in the environment. PAHs represent the largest environmental threat resulting from the release of oil into the ocean.

Hydrocarbons are not the only concern for chemicals in oil products. Heavy metals are also part of the complex chemical mixtures that makeup crude oil. This includes lead, cadmium, chromium, copper, and zinc. When these elements are introduced at elevated levels in the marine environment they can have negative impacts on biomass growth, compromise immune function and reproduction processes, and can bioaccumulate resulting in the magnification of exposure to higher level organisms.