This content is taken from the University of York's online course, Tackling Environmental Challenges for a Sustainable Future. Join the course to learn more.
View course
2.12 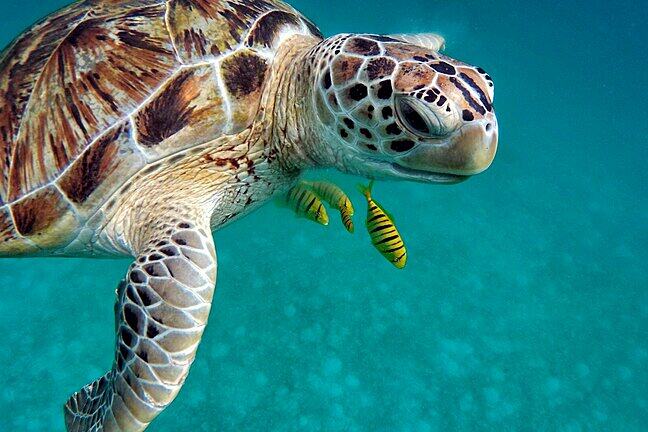 There is no longer any doubt that humans are causing our climate to change; warming up the atmosphere and changing the weather. As we already know, the ocean absorbs over 90% of the heat in our atmosphere. If the ocean didn’t exist then the extra heat generated by greenhouse gas emissions would have warmed up the surface of the Earth by over 50oC degrees!

Despite the enormous amount of heat being absorbed by the ocean, the top 75 m (the region most affected by warming) has only increased in temperature by about 0.6oC since 1970. This small change is due to the vast size of the ocean – it takes a lot to heat it up! However, because of the ocean currents that we talked about earlier, these trends are highly variable – some places are warming up much faster and more than others. Those areas are termed ‘Climate Change Hotspots’ and include places such as the North Sea, the Gulf of Maine and the east coast of Tasmania.

How does this increase in temperature affect marine species?

Even though the change in ocean temperature sounds modest, it is having a big effect on marine organisms. This is because most marine species are ectotherms – they take their temperature from what is around them, i.e. the ocean. So a change in the ocean of one degree or two degrees is a bit like us getting sick and having a temperature of one or two degrees – it doesn’t feel great! All species have evolved to live in a specific climatic envelope. The effects of ocean warming will therefore vary according to the distribution of species within that envelope. For example, ocean warming in the northern hemisphere is likely to be detrimental to populations at the southern end of their range, but beneficial to those at the northern end.

Ocean warming effects species in four main ways – it changes their distribution, it effects population size, it alters food chains, and it damages habitats. All of these effects are interlinked to some extent, but we shall now examine each in turn.

At the most basic level, a species may change its distribution by moving to a more favourable environment. These response are most readily seen in large mobile species such as dolphins and whales, sharks and large fish. For example, leatherback turtles have shifted their annual migration path from the Caribbean to the North Atlantic by 300 km north in response to warming temperatures.

Species distributions may also change more slowly but permanently through effects on population sizes in different areas. Temperature change effects metabolic rate in fish and invertebrates, and therefore vital processes such as growth, breeding and death rates. Around the UK this is resulting in an increase in what were previously thought of as ‘Mediterranean species’, e.g. red mullet, boarfish and john dory, but a decrease in species with more of a ‘Northern affinity’ such as Atlantic cod and haddock.

Ocean warming also appears to be boosting breeding rates in king scallop populations – as a result scallops now support the most valuable fishery in England. These changes to fish population sizes obviously also effect fisheries. When species move from one countries’ waters to another (as has happened with a number of species around Europe over the last 40 years) there can be fierce disagreements about how to manage the situation.

A good example is the so called ‘Mackerel Wars’, an ongoing dispute between Iceland, the Faroes, the EU and the UK. Iceland and the Faroes argue that mackerel have increasingly moved into their waters due to climate change, and they have increased their catch quotas accordingly. The other countries disagree, and therefore don’t want to reduce their quotas in response. Meanwhile the stock is being dramatically overfished, which in the long run will mean everyone loses.

Effects at the bottom of the food chain can cause a knock on effect on higher level species. For example, over the past 40 years, certain types of plankton have become less abundant in the North Sea and have been replaced by less nutritious varieties. This plankton is the main food source of juvenile Atlantic cod. The changes in plankton are thought to have dramatically reduced the survival of these young fish, and therefore ultimately the size of adult populations.

But an even more dramatic effect of ocean warming is on habitats, epitomised by the tale of coral reefs. Coral reefs are incredibly diverse and support immense amounts of other marine life, including one quarter of all fish species on Earth. But corals live their life in a delicate balance. Most species get the majority of their energy from symbiotic algae (zooxanthellae) that live inside their cells. However, when the water gets too high, these algae are expelled, and if temperatures don’t return to normal in a few days, the corals die.

This is known as coral bleaching, a process that has been devastating coral reefs around the world over the past three decades. The Great Barrier Reef, one of the ‘Seven Wonders of the World’, has experienced five major bleaching events since 1998, three of them in the last five years! Some scientists sadly believe that 70 to 90% of all of the world’s coral reefs will be gone by the middle of this century.