This content is taken from the University of York's online course, Tackling Environmental Challenges for a Sustainable Future. Join the course to learn more.
View course
2.24 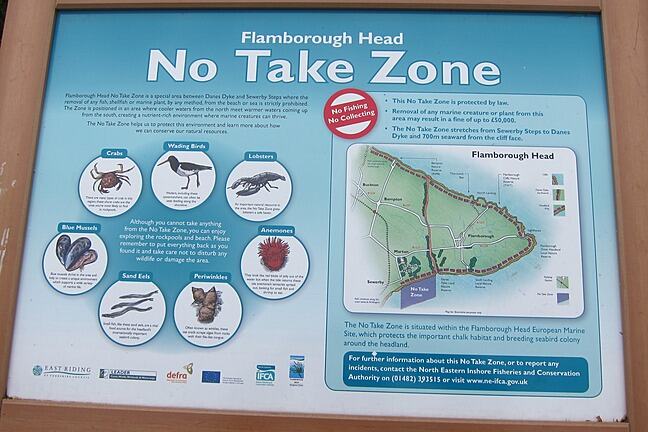 Flamborough Head in Yorkshire is the location of one of only four Highly Protected Marine Areas in the UK. But a recent government review gives hope that more will be created.

Given the ongoing challenges facing fisheries management, scientists have been exploring other approaches to improve sustainability. One of the most popular alternatives has been to designate Marine Protected Areas (MPAs) – areas of the sea where fishing and other activities are either restricted or banned altogether.

MPAs have an ancient history, particularly in the Pacific, where indigenous island communities have long banned fishing in certain areas of reef, generally for a set period of time, so that life there can replenish. The western world was much slower to catch on, with the MPAs only gradually beginning to be established during the first half of the 20th century.

Change since the first international symposium on Marine Parks

So why have MPAs suddenly become so popular? The main idea is that by protecting areas from fishing you can build up high densities of large individuals (fish and shellfish) – effectively putting ‘Money in the bank’. Because large individuals produce disproportionately large amounts of eggs then you also get very high amounts of reproductive activity in MPAs. When the eggs of most marine species get fertilised they turn into larvae that then drift around in the current for 3 or 4 weeks.

This means that reproduction in MPAs effectively reseeds the areas around them that are open fishing, through a process known as larval export. As numbers of fish and shellfish build up in the MPAs they also move out onto the fishing grounds through spillover.

But MPAs are not only good for fishing. By removing disturbance, particularly from bottom towed fishing gear like trawls and scallop dredges, they protect and aid recovery of habitats and biodiversity. These improvements in habitat flow back to commercial species and further aid recovery by providing better quality settlement and nursery sites.

Evidence for the effectiveness of MPAs

Or at least that’s the theory. How does the evidence stack up? Pretty well actually. A meta-analysis of studies that have examined the effectiveness of the most highly protected MPAs (otherwise known as No-take Zones) found that on average the biomass of fish was 670% greater than in adjacent unprotected areas. Many studies have also found evidence for spillover – demonstrated by the large numbers of boats often fishing around the boundaries of MPAs. Proving larval export is more difficult, but the case for it is building as the latest genetic techniques are employed.

Setting up MPAs and making sure they are well managed and monitored is not straightforward. In the rush to implement MPAs, many governments have established them as lines on the map, but not put any regulations in place. These are known as ‘Paper parks’ – they give the illusion of protection without offering any.

MPAs are not always well received by fishermen and local communities either. In some ways this is understandable, they involve closing some areas of fishing ground. But as highlighted earlier, MPAs have the potential to benefit both fisheries and conservation – a win-win scenario.

The trick is to convey that message to everyone involved. For a fantastic example of how a local community was galvanised to protect the seas around the Isle of Arran in Scotland, check out this great video: