0:09Skip to 0 minutes and 9 seconds Briefly summarise some of the other systematic review evidence that we conducted. So these are studies where we’ve reviewed the worldwide literature for evidence. And in particular, [coughs] we were looking for evidence that has been shown to reduce antibiotic prescribing. And there are four key themes that emerged. The first is that it needs to involve both parties in the consultation, ideally. So clinicians and parents are most likely– if they’re involved in these interventions, they’re much more likely to be successful. The second is that– and I’ve used Maureen baker’s photograph here, she’s the chair of the Royal College of General Practitioners.

0:58Skip to 0 minutes and 58 seconds The second is that if clinicians are involved in the design of these interventions, they are much more likely to be effective. The third is that if you can incorporate the interventions into the flow of clinical care– for example, using electronic medical records and the resource that that is in terms of pop-up reminders and so on– then again, interventions are more likely to be successful. So finally, delay prescribing is also effective in reducing prescriptions. So the ideal intervention is going to incorporate these four characteristics. Another element of the work that we did, which has already been published in the BMJ, was looking at post-consultation symptom duration. And again, we’ve reviewed the world’s literature for all the evidence on this problem.

1:58Skip to 1 minute and 58 seconds And we know that if you can manage expectations appropriately in the consultation, you’re more likely to end up with a parent who doesn’t look like this and maybe one who looks a little bit more like this. Because just simple information can really help bring parental expectations into line with what’s most likely to happen. So we’ve found that croup symptoms are most likely to last for around three days, sore throat, seven, earache, eight. Common cold symptoms, 14, and cough, 21. And most of that actually is not particularly new. The two elements that are relatively new are the earache and the cold symptoms.

2:38Skip to 2 minutes and 38 seconds And I just want to highlight that our sense was that there’s not a great deal of point in telling parents the point at which 50% of children have resolved. Because for their particular situation, they’ve got a 50/50 chance of either being one of those parents or not. And that’s not great if, for the half whose symptoms go on for longer, and therefore are questioning, do I need to come back? So our sense was it was probably more useful to tell parents the duration by which 80% or 90% of children’s symptoms will have resolved. And for earache, as you can see on the arrow there, that’s a little bit longer than NICE.

3:18Skip to 3 minutes and 18 seconds For example, currently, NICE says that earaches last four days. So the evidence looks like it’s probably ready for a little bit of an update. And that’s true also for the common cold symptoms, that they are a little bit longer than current NICE and the CDC in the States would currently recommend. So the purpose of that final element of the programme was to see if we could use children’s baseline characteristics– so the symptoms that parents report to us, the clinical examination findings– to predict which children would end up in hospital with their respiratory tract infection.

4:00Skip to 4 minutes and 0 seconds So a group who’ve got really quite poor prognosis, and the opposite, of course, being that are those same symptoms and signs useful for identifying children who are not going to end up in hospital? Who’ve got a good prognosis, and maybe in whom we can feel a little bit more confident to withhold antibiotics. Now with the help of literally dozens, in fact, I think it was 250 or so GP practices, we recruited just over 8,300 children to this study. Admission to hospital with a respiratory infection is a relatively unusual event. So we knew we needed a large number to have some statistical confidence in our data.

4:45Skip to 4 minutes and 45 seconds And we collected all the same symptoms and things that you would expect [coughs] and that Jeremy showed us earlier on. These are all the things that parents tell us and that we examine. And then our statisticians– and forgive me for those of us who are academics in the room, because we’re not going to go into the detail– our statistical team made some sense of all of that data and identified that there are, in fact, seven characteristics that can be used to identify good and poor prognosis children. And we’ve called this a mnemonic, which we’ve decided to call STARWAVe. And each of these seven features are risk factors for children being admitted to hospital with a respiratory infection.

5:33Skip to 5 minutes and 33 seconds And these admissions were not occurring on the day that the child was recruited. So these are not diagnostic, these are prognostic. These are characteristics that tell the future. So only 20%, 19% of the children were actually admitted on the day that they were seen. So 80% were admitted on the subsequent days. So I’ll just run through them. They’re pretty self-evident. But children with a shorter illness duration were more likely to end up being admitted. Children whose parents reported that they’d had a severe fever in the previous 24 hours or where the clinician recorded that there was a fever at the examination. Children who are under the age of two.

6:16Skip to 6 minutes and 16 seconds Clinicians who reported that they could see the child was struggling to breathe, this is where the muscles between the ribs are being drawn in on breathing, which is actually probably a sign that parents can recognise, as well. Clinicians who reported wheeze on examination. Children who had a current diagnosis of asthma, and children whose parents reported that they had vomited moderate or severely in the previous 24 hours. So again, some more statistical work and one can take these seven symptoms and signs and group them such that you can start to stratify the risk of subsequent hospitalisation. So the very top row there shows you the risk of hospitalisation amongst all children in the entire 8,394 cohort.

7:08Skip to 7 minutes and 8 seconds And you’ll see that it’s just under 1%, so around 1 in 106 children in totality. The children who had none or one of those seven features, their risk of being hospitalised falls quite considerably to around one in 300 or thereabouts. We then have a sort of middle group, those are children who have got two or three of these features, and their risk remains more or less the same– of a similar order to the whole cohort. And then there are children who’ve got four or more, and their risk of hospitalisation increases quite substantially. Very approximately, around 60% of children fall into the first category, that low risk category.

Development of the STARWAVe Tool

Alistair Hay describes the need for the development of the tool and then discusses the clinical usefulness in the video. This can be useful in clinical practice to assist with the likelihood of an infection being present that will require antibiotics.

To read more about the development of STARWAVe click here to read the paper in the Lancet in 2016.

To understand how to introduce STARWAVe to your practice please download this useful document. 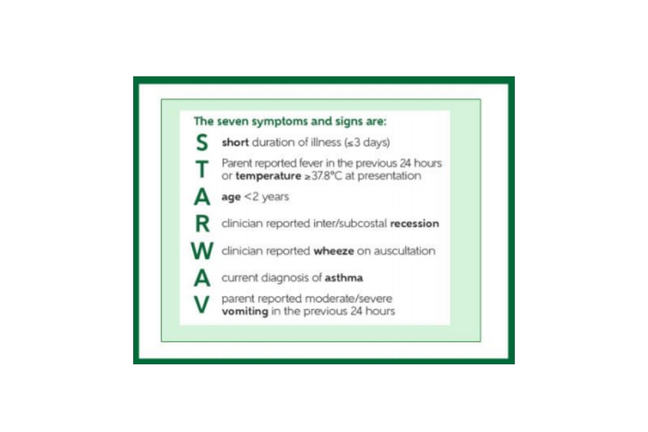