Example of problem solving in a formative assessment

Fault finding is a useful skill and is likely to improve or consolidate understanding of circuit theory. The voltmeter is an invaluable tool for fault finding. Let’s take a fictitious example with two students, Johnny and Lucy. 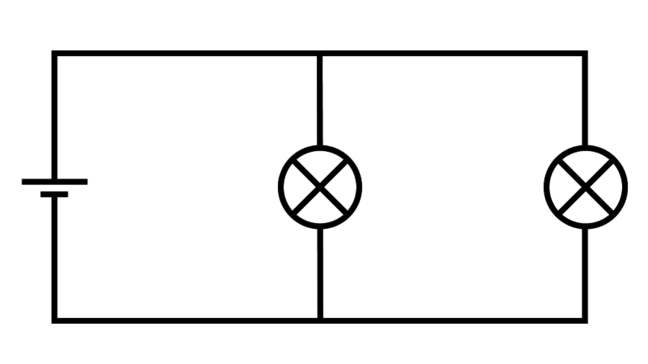 Their teacher, Mr. Green, is watching their interaction:

Johnny connects two identical bulbs in parallel with six volt supply. One bulb lights but the other does not.

Johnny: “The other bulb must be broken because it’s not lit.”

Lucy: “We should check both wires and the bulb in the loop first, to see where the fault is.”

Lucy measures the potential difference across the bulb first and it reads 0V.

Johnny: “There you go. I’ll get another bulb.”

Lucy measures the p.d. across one wire and it reads 6V. The other reads 0V.

Johnny: “One of the wires must be broken… But which one?”

Mr Green: “What voltage would you expect across the wires? Is there a way you could find out from your circuit?”

Lucy: “We could measure the voltage across the wires in the working part of the circuit.”

Johnny measures them both to be nearly 0 V.

Mr Green: “So why is there nearly 0 V across them? Think about our Ohm’s Law equation relating voltage to current and resistance. Can you write it down, Johnny?”

Johnny: “I can’t remember it.”

Lucy: “The voltage is about 0 V, so either the current or the resistance must be about zero.”

Johnny: “The current isn’t zero because the bulb is lit. So it must be the resistance.”

Mr Green: “So why is there 6V across the faulty wire?”

Lucy: “Because it has a high resistance? But why?”

Johnny removes the wire and finds that it has been pulled out of the connector.

Lucy: “So that’s why the bulb did not light. There was no current flow to transfer energy to the bulb.”

Later, Mr. Green asks Johnny and Lucy to explain to the rest of the groups what happened with their circuit during set up, so that they can share what they learnt with the whole class.

This is perhaps a slightly idealised example of how the conversation would flow. The main point to take away from this example is that fault finding helped both Johnny and Lucy in their understanding of circuit theory, and it helped Mr. Green with his formative assessment of Johnny and Lucy.

This kind of scenario could also be presented to students, either in circuit diagrams, or as a concept cartoon strip, or as a real faulty circuit that you look at as a whole class.

Can you think of examples where problem-solving and/or fault finding could help with assessment for learning? Perhaps you could write your own fictitious problem-solving scenarios to share.