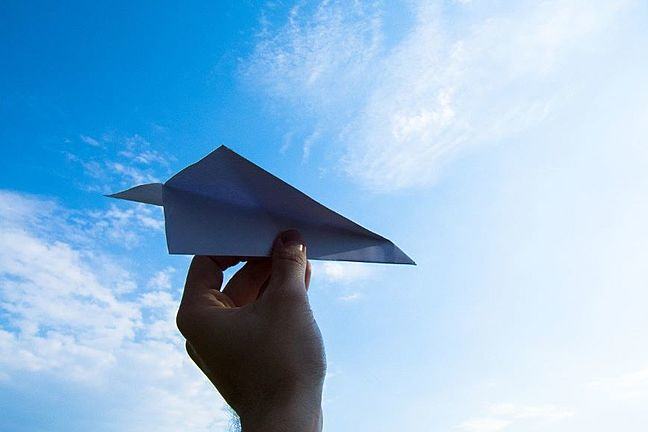 The forces acting on a plane

When you throw a paper plane in the air, you are giving the plane a push to move forward. That push is a type of force called thrust. At the same time, air pushing back against the plane is slowing it down, creating a drag force. This is commonly known as air resistance. There is also gravity acting on the plane pulling it down to the ground. Some of you may also have labelled lift, which is mostly generated by the wings.

Thrust is the force which moves an object through air or water. Forces will also be present when objects are moving through different gases or liquids, but air and water are the common examples that we experience. In the case of an aeroplane thrust is generated by the engines. The thrust of a paper aeroplane is the force that we apply in throwing it forward. In simple terms these forces are a push which sends the objects forward.

Air resistance is a type of friction, a force which opposes the movement of objects. The particles in the air hit against the moving plane and oppose its forward movement. The greater the surface area for the particles to push against, the greater the force. This slows the plane down as it flies through the air. The faster something is moving through the air, the more particles will push against it in a given time, slowing it further. This means that air resistance is increased by speed, as well as by surface area. Things that are designed to move quickly through the air will be a shape that minimises air resistance, known as a streamlined shape. Examples include planes, rockets and racing cars

Lift is the force that keeps the plane in the air. The wings of the plane are designed to be a shape that causes the air to move faster over the top of the wing. As the air moves faster the pressure above the wing is lowered. The pressure difference between the top and bottom part of the wing creates a force that lifts the wing, (and the plane) into the air.

Gravity is the force exerted by the Earth, pulling objects towards its centre. The greater the size of an object the more gravity will act upon it.

The image below shows a paper plane, like the one that you made earlier. The labels indicate the forces acting on it. There will be an instant in time where you can consider the paper aeroplane to be flying at constant speed, but this is for a very short amount of time as it will start to slow almost as soon as you let go of it. This is due to air resistance, which will then result in unbalanced forces acting on it (no forward force, just a backwards force from the air resistance). It could fly at a steady speed if it was thrown in a vacuum. 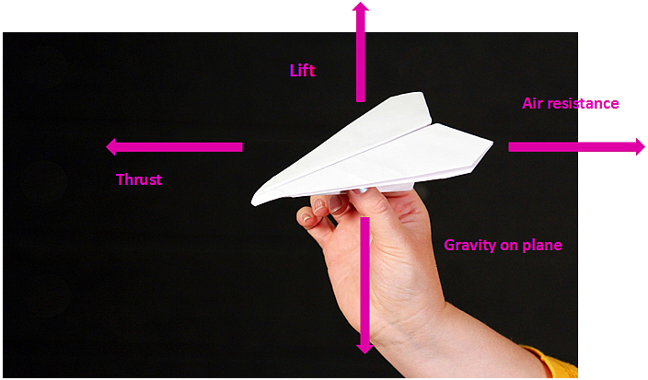 Have a look at your diagram of the forces acting on a paper plane. Is it similar to the image shown above? How confident would you feel explaining this to children? Share your thoughts.

Discover effective methods to teach graphs and functions as part of the maths curriculum for students aged 10-16 years.