Teaching Students Who Have Suffered...

0:06Skip to 0 minutes and 6 secondsFrom the time an infant is born, a powerful attachment develops between parent and child. You see evidence of this when parents are holding their children; when they are looking into each other's eyes and responding actively to each other's emotional cues, sounds, and expressions. You might notice a new parent making silly faces and funny noises as he or she engages with the infant and soon after you’ll see the child responding by almost mimicking these facial movements and sounds. Or you might notice a parent picking up a young child who is distressed and almost immediately, the parent's facial expression and emotional reaction will adapt to match more closely that of his or her unhappy child.

0:53Skip to 0 minutes and 53 secondsAs carers and their children respond to each other's cues, particular neurons in the brain that manage human emotion – and the body’s physiological responses to emotion – are firing. Sometimes this starts in the brain of the parent and then very quickly these same type of neurons will fire in the same parts of the child's brain. Or sometimes, this starts in the infant's brain and almost immediately the same types of neurons in the same parts of the parent's brain will fire. When this happens, each cannot help but respond in a way that engages with the experience of the other and as children grow and mature, this process happens more and more quickly.

1:34Skip to 1 minute and 34 secondsThe neurons involved are known as mirror neurons and this interactive process forms the foundation of human attachment, which develops and matures to assist with all future relationships. This is the beginning of relational concepts such as compassion, and empathy, and social connectedness. As young children grow and then start to move, more and more they engage in exploring their environments and playing and connecting with other children.

2:03Skip to 2 minutes and 3 secondsTo do this successfully, they initially need the support of the parent to be what is referred to as the secure base (the one who encourages the child to be brave and confident) and then to be what is referred to as the safe haven (the one who helps to co-regulate emotions when things are upsetting or scary). Emotional co-regulation is an interactive, relational experience between adult and child that leads to the eventual calming of the child, such as when a parent hold or rock, or speak gently to a child to soothe and settle him or her.

2:41Skip to 2 minutes and 41 secondsThis secure base/safe haven cyclical activity happens multiple times a day during early childhood and, as a result, children eventually develop the capacity to become more autonomous and better at self-regulating their emotions. If a child doesn’t regularly and predictably experience this secure base/safe haven activity in early childhood, this can have a negative impact on the ability to self-regulate emotions and to relate to others and, down the track, this can impact on the student’s behaviour and engagement with their schooling.

To understand the impact of complex trauma on the schooling experience of our students, we need to examine some key areas of theory: 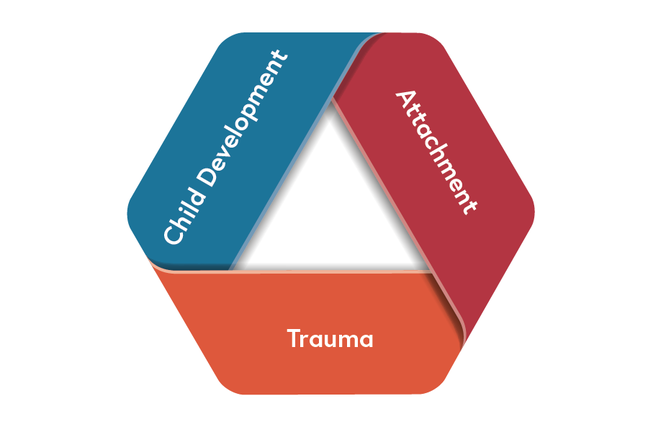 What have you learnt through this video that you didn’t know before? How will this new knowledge support your practice as an educator?