Teaching Students Who Have Suffered...

0:07Skip to 0 minutes and 7 secondsAttachment theory shows us how important parental bonds are to a child’s development. What’s even more interesting is what happens within the nervous system during this early stage of development. Neural development involves the generating, shaping, and reshaping the nervous system and the first years of life involve intensive neural development. During early childhood, pathways of interconnecting neurons are rapidly being formed, connected, and reinforced. To better understand how this incredible neural activity occurs, we need to have a quick look at what’s happening at a cellular level. For cells to communicate with each other, and for neural pathways to develop, an electrical-chemical process takes place. So, what happens during neural development? First, the dendrites collect electrical impulses or information from neighbouring neurons.

1:07Skip to 1 minute and 7 secondsThis information moves to the cell body and then travels down the axon and through to the axon terminal and finishes at the terminal buttons. Once the electrical impulse reaches the terminal buttons, the synaptic vesicles react and then release neurotransmitters into the synapse. Some neurotransmitters are taken back into the first neuron (which is referred to as re-uptake) and some travel across the synapse and bind to receptors in the dendrites of neighbouring neurons. This process can lead to the electrical impulse either continuing onto the next neuron – or not!

1:49Skip to 1 minute and 49 secondsWhen one cell fires the next cell and then the next cell (and on and on), the cells join up and neural pathways develop and when this process happens over and over again, the pathways become stronger and stronger. As children’s attachment establishes and grows with parents or carers and then with other people, particular neural pathways are developing rapidly and are being reinforced - and synaptic connections are being strengthened in response. As a child moves from the early years to childhood, puberty, and then through adolescence, the neural pathways and synaptic connections that are established and resilient are maintained and continually strengthened. However, those pathways and connections that are not reinforced well are pruned away.

2:40Skip to 2 minutes and 40 secondsBoth processes (neural pathway development and neural pruning) work together so that by the time we reach adulthood, we have a nicely structured and well-functioning brain and nervous system. When the child's life experience has been mostly safe, nurturing, and stimulating, this neural development and pruning is beneficial and adaptive. Developing brains and entire nervous systems grow to be increasingly well-structured and well-functioning. However, children who experience complex trauma can miss out on some of the vital and repeated, environmental and social activity that is necessary for healthy and adaptive early attachment and development.

3:26Skip to 3 minutes and 26 secondsIn such instances, the child’s carer may not provide the "secure base" or "safe haven" activity, so the opportunity for repeated emotional co-regulation and then the development of the capacity for self-regulation is not well-achieved. Neural pathways and connections that should be reinforced may not receive this reinforcement - or may even be pruned away - and those pathways that are not helpful (such as fear or anxiety responses) may actually be reinforced. Unfortunately, if neural growth is suffering at this vital and rapid stage of development, it is likely that there will be negative emotional, relational and behavioural outcomes once these young children move into and throughout their schooling years.

To understand why students who have experienced complex trauma can behave in the way they do, let us consider the impact of trauma on the early development of a nervous system. This will help us to better understand how to respond to behavioural concerns. 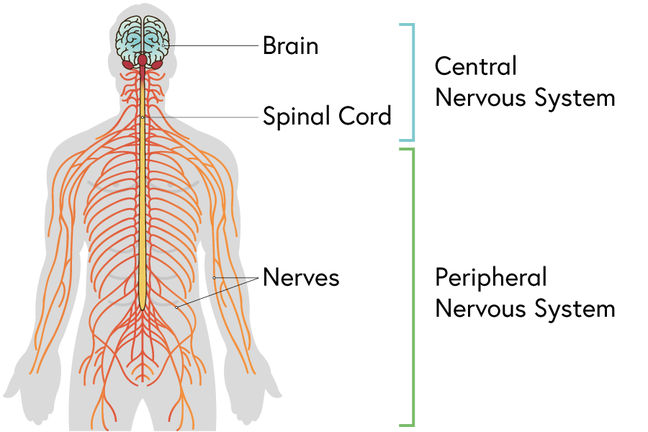 The nervous system consists of:

The nerve cells in the peripheral nervous system connect the central nervous system to sensory organs (eyes, ears, skin, etc.) and to other organs of the body, as well as to muscles, blood vessels, and glands. 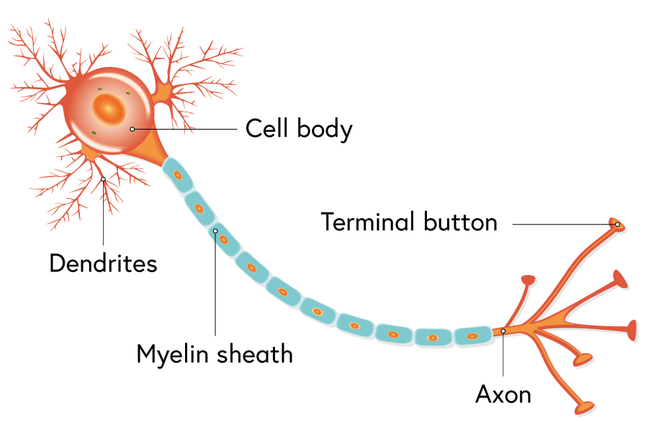 A neuron (or nerve cell) consists of a number of parts:

At the end of the axon, the axon terminal branches out and ends in small bulbs called terminal buttons. Each terminal button contains synaptic vesicles which are pockets containing a multitude of differing chemicals called neurotransmitters (or neurochemicals).

Neural pruning is the process through which neurons that are damaged or neural pathways that are not strong are eliminated. This process happens to enhance the efficiency of neuronal transmissions throughout the nervous system.