This content is taken from the The University of Sheffield's online course, Technical Report Writing for Engineers. Join the course to learn more.
View course
2.6

When writing a report, you need to distinguish between your work, and work taken from other authors. If you make a statement of fact during the introductory sections of your report without acknowledging it as previous work, it will leave the reader questioning its integrity. Also, if you fail to acknowledge the work of other authors, you could be accused of plagiarism.

Citing a reference acknowledges the work of the author you have consulted and enables others to locate their work. The process is done in two parts, first as a citation next to the text, image or other artefact in your report and second as a reference at the end of the document.

Take a look at this excerpt from a report. Notice the numbers in square brackets? These are citations. 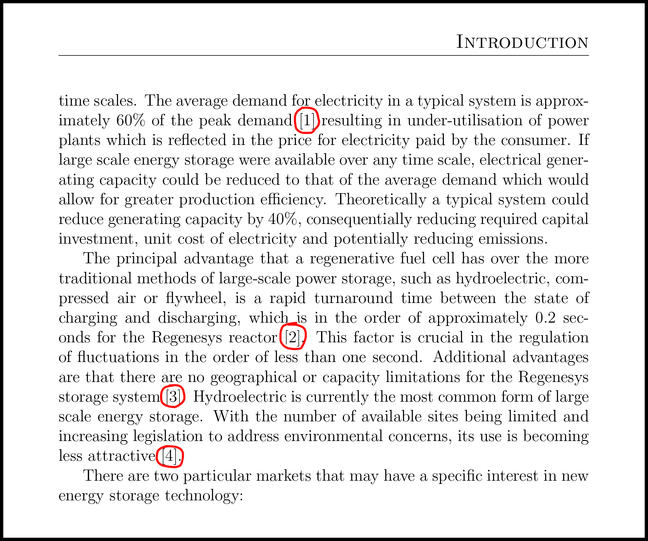 If someone else’s work has been cited, a section at the end of the report called “References” should be created. The References section is a list, linked to the citation in the body of the report, with each list item containing details of the original document.

The reference acts as a pointer for the reader to locate the source of the original document (the primary source). Therefore the reference needs to include enough information to track it down uniquely. Whenever possible, you should read the primary source and use this as your reference. Secondary sources may contain mistakes and are often not peer-reviewed.

Generally, there are considered to be two main styles of referencing. The first uses author surnames as the citation method and are listed alphabetically in the References section.

The second, as shown in the example above, uses sequential numbers as the citation and are listed in numerical order in the References section.

In either case, if a work is cited more than once in the body of a report, you don’t need to create a new item for it in the references list - just cite it again using the same pointer as the first mention.

For engineers, the most common styles are Harvard (author based) and IEEE (number based).

To help you get familiar with these referencing styles, let’s walk through an example of how to cite and reference a book using Harvard and IEEE.

You want to include some data in your report that you found in a book called ‘Solar Engineering of Thermal Processes’ by John A. Duffie and William A. Beckman.

Using the Harvard referencing style, this source is cited within the body of your report by giving the name of the author(s) followed by the date of publication:

The following details about the publication are then given in the list of references at the end of the report:

With the IEEE referencing style, each time you introduce an idea, thought or theory that belongs to another person, a reference number should be added and enclosed in square brackets e.g. [1], [2].

If you are using the same reference more than once, it will keep the same number all the way through your report.

The citations are then listed by number (not alphabetically) in the reference list at the end of the report as follows:

The University Library has detailed referencing guides for using the Harvard and IEEE referencing styles, including how to reference websites and other technical reports. We recommend you refer to these guides when you come to write your next report.

Have you used a referencing style before? Do you have any advice for referencing properly?