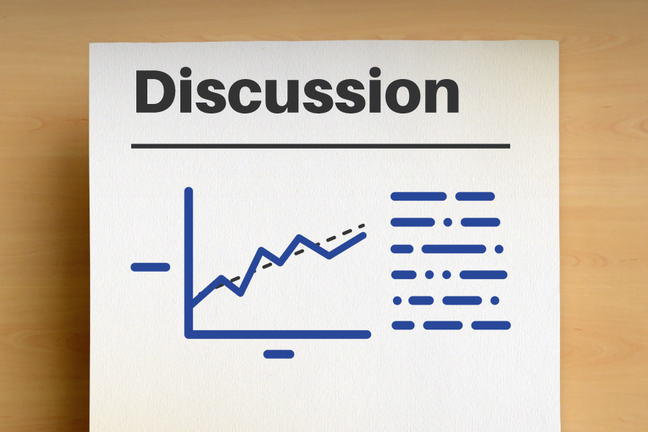 What goes in a discussion?

The discussion is probably the least fixed section of your report. There are no hard and fast rules about what should go in and unlike the method and results, discussions don’t follow a particular format. However, it is important that your discussion has a logical structure and the argument has a clear flow to it. In this article, we’ll look at the key details that should go into a discussion section.

The point of a discussion is to explain:

So what needs to be in your discussion?

Example 1: Significant differences were found between the two samples (p<0.005).

Example 2: The graph suggests a linear relationship between applied force and measured deflection.

We usually talk in terms of “confidence intervals” within which a value is almost certain to lie, and “statistically significant differences” between two or more datasets we’re testing.

The discussion should attempt to explain the significance of the results in the context of the report, other work within the organisation and/or the wider literature on the topic.

It’s the only section where you can use conjecture (forming opinions based on incomplete information) for example:

Example: The nitrile gloves performed better than the latex. One possible explanation for this result could be the glove thickness.

But you shouldn’t make guesses without providing supporting evidence.

Your discussion might include comparisons with other work or reference to established theory.

Example: Neither test was able to find any significant difference between latex and nitrile examination gloves in their effect on roughness perception… It might be expected that the higher shear forces experienced with the latex gloves would affect perceived roughness. However, Taylor and Lederman showed, through both a theoretical model and experiments with grooved tiles, that friction is not a significant factor in perceived roughness.

Take a look at this example Discussion from an experiment to measure the vibration properties of a beam under different conditions.

The writer has wrongly put all the theory here instead of in the Introduction, where it belongs. They have also failed to refer to their results!

A better example can be found in this excerpt from the same experiment: 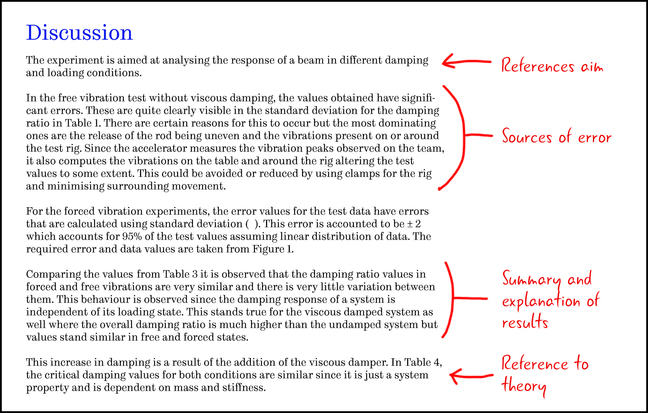 So now you hopefully have an idea of what should go into a discussion, and what definitely shouldn’t!