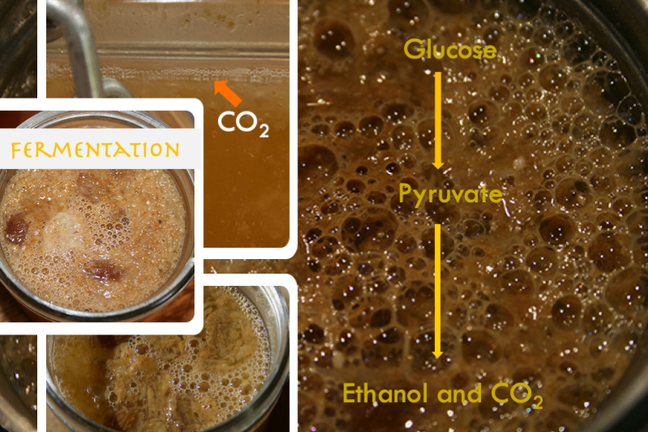 What happens after glycolysis depends on the availability of oxygen.

In the presence of oxygen, the next stage after glycolysis is oxidative phosphorylation which feeds pyruvate to the Krebs Cycle and feeds the hydrogen released from glycolysis to the electron transport chain to produce more ATP (up to 38 molecules of ATP are produced in this process). This is the more efficient pathway for ATP synthesis. However, in the absence of oxygen, alternative paths are taken. One option is a process called fermentation. Fermentation comes in two flavours:

Although fermentation is not the most efficient way of producing ATP, some byproducts of this process, e.g. ethanol, are useful in Bioindustries.

NOTE: Ethanol is produced as a byproduct of fermentation in plants and yeast. Fermentation in animal cells results in the production of lactate which is a real pain in your muscles! 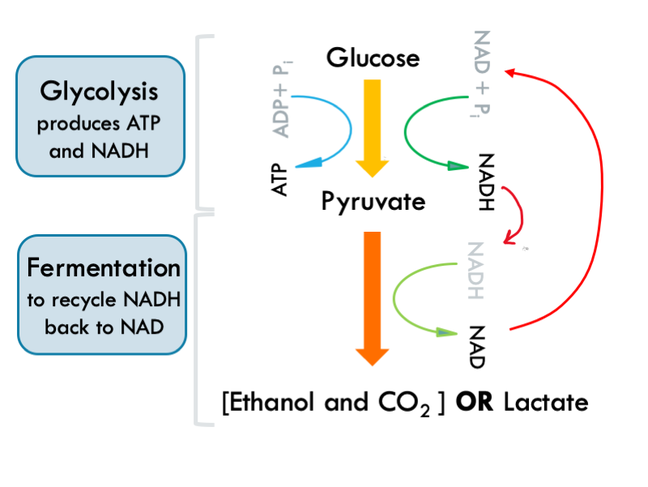 Anaerobic respiration can also use glycolysis (remember how glycolysis does not require oxygen?) but the pyruvate formed then enters an anaerobic respiratory chain which means it is recycled as an energy carrier and is not broken down to CO2 and water. In this case the terminal electron acceptors used are usually inorganic ions such as sulfate and nitrate, as outlined in Step 1.6. Due to the limited availability of ionic species like these to act as terminal electron acceptors, metabolism using this route tends to be quite slow. This supports the idea that glycolysis is an ancient metabolic pathway developed before the Great Oxygenation Catastrophe that has been preserved and improved as life has evolved. It’s likely that glycolysis FIRST existed as part of anaerobic respiration before being coupled to fermentation and then to aerobic respiration.

Not all energy production involves glycolysis

Methanogenesis is an even more ancient form of energy generation and does not use glycolysis at all (after all, glycolysis assumes there are sugar molecules around, and the first life would have had to make sugar). Instead methanogens, which belong to the domain archaea, use carbon dioxide as a terminal electron acceptor to reduce hydrogen to methane. Methane is their “waste product” in the same way ethanol, lactate, carbon dioxide and water are, in the other pathways we have discussed.