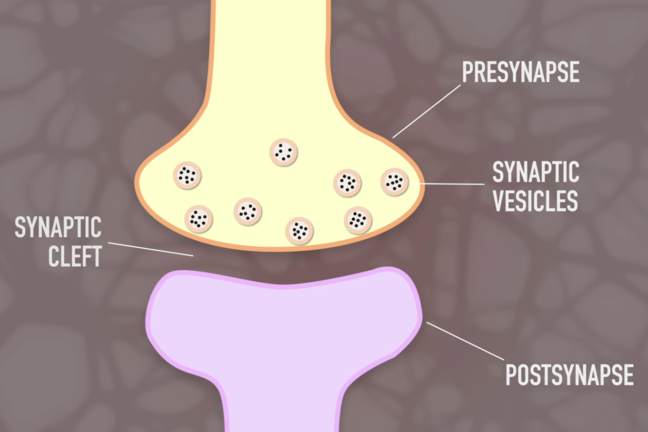 Biology toolbox: how do we know neurotransmitter is in packets?

The observation of neurons as individual entities with junctions (or “synapses”) raised the question: How do neurons communicate?

As early as the 1870s Emil du Bois-Reymond proposed chemical communication through substances released at nerve endings. The first neurotransmitters were discovered in the early twentieth century, albeit outside the brain. In 1921 Otto Loewi showed that stimulating a nerve in the frog heart could slow down the heart beat. Loewi showed that this was because the nerve released a chemical, which was later isolated and characterised by Henry Dale and shown to be acetylcholine, a neurotransmitter used at nerve-muscle junctions and in the brain. Loewi and Dale shared the Nobel Prize in 1936 for their discoveries relating to chemical transmission of nerve impulses. Each synapse releases only one type of neurotransmitter. Although you might have heard of dopamine or acetylcholine, the most common neurotransmitter in the brain is glutamate, which is also an amino acid.

Just as the nerve-muscle synapse in the heart led to the discovery of neurotransmitters, the neuromuscular junction comprising of motor neurons and skeletal muscle in the frog leg revealed another fundamental property of chemical synaptic transmission. In 1952 Paul Fatt and Bernard Katz showed that neurotransmitter is released in packets (also called quantal release). You’ve probably heard of quantum physics, where a quantum (plural quanta) is the minimum amount of a physical entity (ie. matter or energy is in discrete packets).

What are the packets?

The structural basis for quantal release of neurotransmitters came from electron microscopy studies by George Palade in 1955 who observed vesicles at the neuronal synapse. This led to the idea that neurotransmitters are packaged in vesicles and each vesicle contains a fixed amount of neurotransmitter. Quantal release can then be explained if each vesicle releases its entire content during synaptic transmission- i.e. release is all or none. Direct evidence for this came from the development of a new technique that captured a vesicle in the act of discharging its contents. 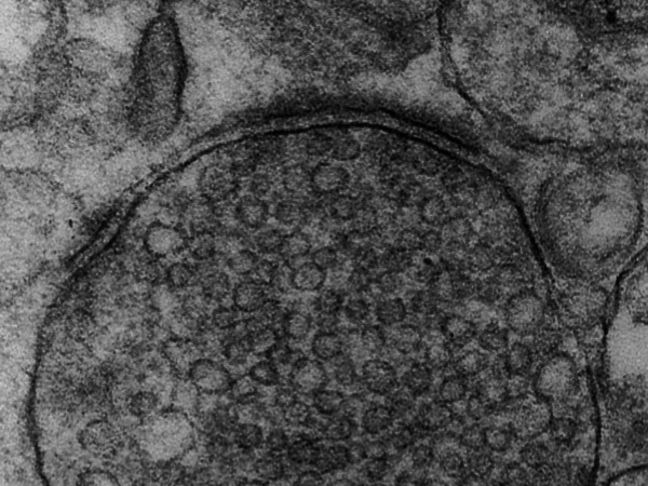 In the 1970s the ‘freeze-fracture’ technique was developed to better understand membrane structure. This technique splits frozen membranes apart at the junction of the two layers of phospholipids (remember, membranes are made up of phospholipid bilayers). The split halves are then coated with metal and carbon to make a replica that captures the contours of the split membranes. The replica is then examined by electron microscopy. John Heuser and Thomas Reese used this technique on the presynaptic membrane. They froze tissue at defined intervals after stimulation of the presynaptic neuron and noted appearance of dents in the membrane. These dents were transient and not observed after neurotransmitter release allowing Reese and Heuser to conclude that they were vesicles releasing their neurotransmitter. Freeze fracture not only caught a vesicle in the act of exocytosis but also captured other structures and snapshots of various steps in the vesicle cycle. 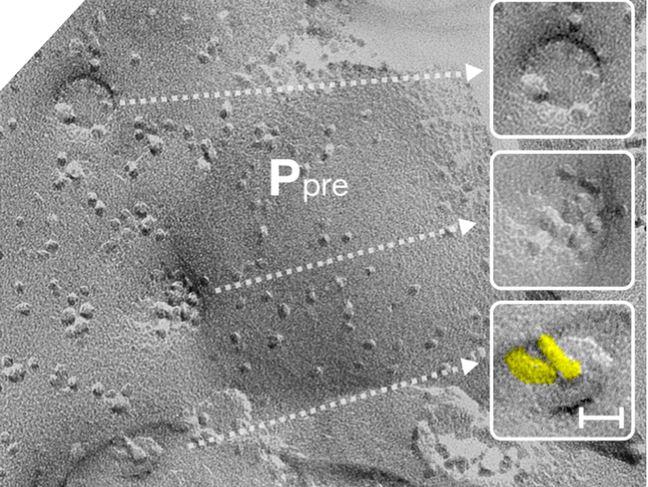 Figure 2. Freeze-fracture electron microscopy images of synaptic vesicle fusion. The indentations seen on the left (and magnified in the insets on the right) are synaptic vesicles fusing with the presynaptic plasma membrane. The bottom inset shows proteins that have been coloured in yellow that appear to be proteins associated with a docked vesicle. Image taken from Zampighi et al. (2014) PLoS ONE 9(6): e100710. Scale bar = 25 nm.

In addition to vesicles, Reese and Heuser observed structures that they believed to be Ca2+channels in their freeze-fracture EM. They also noted that some vesicles were situated close to these ‘Ca2+channels’. Their observations were consistent with earlier work by Katz and Miledi who had used electrophysiological techniques to measure Ca2+ currents in presynaptic nerve terminals. We now know that Ca2+ influx through voltage-gated channels couples electrical excitation of the presynaptic membrane to neurotransmitter release. Today we can visualise this in live cells non-invasively using special dyes that glow only when bound to Ca2+ions.

At the bench: Illuminating synaptic transmission

Fluorescent dyes have allowed neuroscientists to study the events of synaptic transmission. In this video neurons have been loaded with a Ca2+ -sensitive dye. When the neurons are stimulated the dye glows brighter as Ca2+ increases. As the increase in synaptic Ca2+ triggers neurotransmitter release it allows researchers to directly track synaptic transmission. Dr. Sangeeta Chawla and Dr. Gareth Evans and their teams at the Department of Biology, University of York are using these dyes to investigate how synaptic transmission changes during neuronal development, learning and in neurodegenerative conditions.