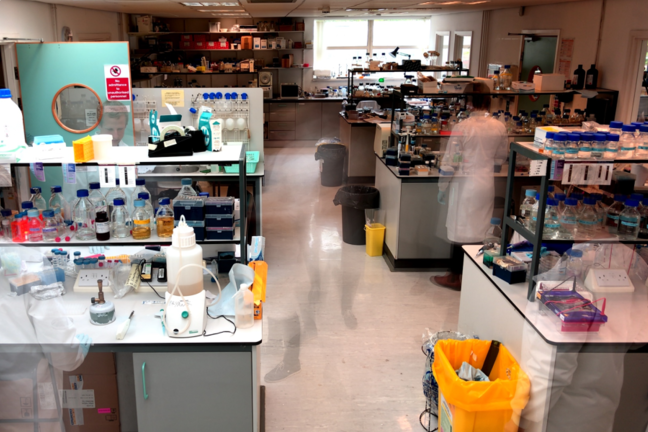 Molecular methods can assist our understanding of ecosystem biodiversity

To understand the processes which determine the biodiversity of an ecosystem, and the ways in which human activities affect them, we often need to find out how many species are present in an area of habitat, which species they actually are, and which species are interacting with which other species in various ways.

Sometimes gathering this data is relatively easy: for example, on a sunny summer afternoon in Britain, I can confidently find and identify all of the butterfly species that are present in a meadow, simply by looking. Sometimes it’s a little harder: for example, identifying mammals in the UK (which are mainly nocturnal, and may also run or hide away from humans), we may need to use techniques like camera trapping, footprint tunnels, or identifying “field signs” (leftover food, or poo).

Sometimes it’s virtually impossible. How can we cope with situations where the identification of species is time-consuming and difficult (e.g. many insect species can only be identified by dissection, and are often sampled en masse by methods such as pitfall trapping), where species are almost impossible to find (e.g. fish and other aquatic creatures living at the bottom of lakes), or where scientists simply haven’t yet described the species present (e.g. in remote areas of tropical rainforest)?

DNA sequencing to the rescue

In recent years, DNA sequencing technologies have improved enormously, allowing us to sequence more DNA, more quickly, and at far lower cost. We can even take DNA sequencers with us into the field for instant results! This has opened up an interesting new possibility: can we identify species and quantify diversity by using their DNA? From this idea, the scientific method of DNA barcoding has arisen. The underlying principle of DNA barcoding is very simple: every species has its own, unique sequence of DNA. By sequencing the DNA of an unidentified organism and comparing the sequence to a reference database of sequences from known species, we can identify which species that organism belongs to.

This approach provides a short-cut to identifying an obscure plant or insect; one that requires no previous knowledge or expertise about the group it belongs to. This can easily be scaled up, to identify all of the species at once in a mixed sample, such as a pitfall trap. When applied to mixed-species samples, the technique is called DNA metabarcoding. Even in an ecosystem where we know nothing about the species that live there, we can still use DNA metabarcoding to estimate how many species are present, and therefore the biodiversity. This is because we know the general rules about how much a DNA sequence needs to change before it is likely to come from a new species. We can identify how many different versions of a DNA sequence are in a sample, and this therefore tells us how many species are represented - even if we have no idea what those species are.

We can even use DNA to detect biodiversity without physically sampling a single plant or animal. This is because organisms leave their DNA behind them wherever they go, like a fingerprint. We can sample this environmental DNA (or eDNA) directly, by taking samples of things like water from lakes, leaf litter, and soil. Sequencing eDNA from those samples reveals the species present in the area. The eDNA in just 2 litres of lake-water gives a more complete record of fish species in the lake than traditional monitoring techniques such as electro-fishing - which are also more disruptive to the fish themselves.

Alternatively, we can sample DNA, not directly from the environment, but from bodies of other organisms. This can include sampling DNA from external surfaces, from gut contents, or even from faeces. The advantage of this approach is that it allows us to gather evidence of interactions between species. Techniques of these kinds are bringing new information to light about which insects pollinate which flowers: DNA is used both to identify pollen grains sampled from the mouthparts of pollinators such as bees, hoverflies and moths, and even to detect and identify eDNA left behind on flowers by pollinating insects.

A new revolution in biodiversity monitoring

The rise of DNA barcoding and metabarcoding is a prime example of how new technology is revolutionising biodiversity monitoring. Scientific research, both to develop these new approaches and to test their capabilities and limitations, is a vital component of these advances.