This content is taken from the University of York's online course, The Biology of Bugs, Brains, and Beasts. Join the course to learn more.
View course
3.14 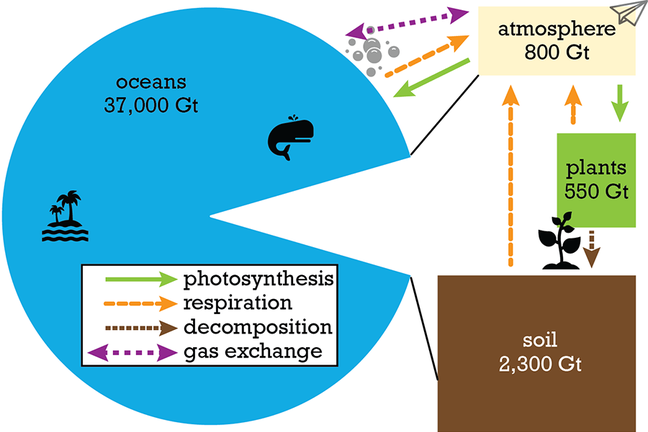 The importance of carbon to life

Life on earth would not be possible without carbon. This is in part due to carbon’s ability to readily form bonds with other atoms, giving flexibility to the form and function that biomolecules can take, such as DNA and RNA, which are essential for the defining characteristics of life: growth and replication. Carbon molecules are therefore sought after by all organisms, which drives complex carbon cycles through all living systems.

When an organism takes up organic (carbon containing) molecules from its environment, it can use them for:

Carbon is found and is exchanged between global reservoirs: the atmosphere, the ocean, terrestrial plant biomass, and soil. The balance of carbon between these reservoirs is important for life. For example, if there were no carbon dioxide in the atmosphere, photosynthetic organisms like plants would have no source of carbon and die out. In the long term, the exchange of carbon between the different reservoirs is balanced so this does not occur. However, changes in atmospheric carbon on geological timescales have been shown to drive (and be driven by) changes in global temperatures.

Carbon in the atmosphere is usually in the form of carbon dioxide (CO2), or methane (CH4). CO2 can be taken up by terrestrial and oceanic photosynthetic organisms, and can also dissolve in the ocean, forming carbonic acid. As shown in the figure above the photosynthetic process plays an important role in driving carbon flux from the atmosphere to the other reservoirs.

REMINDER: photosynthesis is a process carried out by plants (and some other (micro)organisms) requiring CO2, water and sunlight. The energy provided by the sun is used to convert CO2 to glucose, which can be used by the plant for respiration (energy) and/or biomass production.

The ocean stores approximately 50 times more actively cycled carbon than the atmosphere, making it the largest carbon reservoir. In addition, carbon is rapidly exchanged between the ocean and the atmosphere in order to maintain equilibrium. This means that changes to atmospheric carbon levels can be buffered by the ocean: it will release CO2 if atmospheric levels drop, or dissolve CO2 from the atmosphere if levels increase.

Soil is arguably home to the most complex biological communities on the planet. Bacteria, archaea, fungi, protozoa, nematodes and many macroscopic species form networks of resource-and-energy-exchange, in which carbon plays a key role. Carbon is provided to the soil in the form of molecules produced by photosynthetic organisms such as plants. Plants can release carbon into the soil via their roots, which is known as exudation, or by decomposition when part of the plant, or the whole plant, dies. Various molecules of carbon are released, from relatively simple sugars which are rapidly consumed by the soil community, to complex organic polymers such as lignin, which are very difficult to break down and are targeted by specialised organisms (primarily fungi).

Depending on the soil conditions and community composition, microorganisms will adopt different strategies to extract the energy from the carbon they have acquired. In oxygen-deprived soils, such as those flooded with water, anaerobic forms of respiration will dominate and can result in the release of methane. In oxygen-rich conditions on the other hand, aerobic respiration will dominate and CO2 will be released back into the atmosphere.

The role of humans in carbon cycling

Since the late 19th century, humans have extracted fossil carbon to burn for energy. The release of CO2 into the atmosphere causes an increase in carbon fluxes from the atmosphere to photosynthetic organisms and the oceans. Although this limits the overall increase of CO2 in the atmosphere, the increase is enough to have contributed to recent significant increases in global temperature, which affects all life. In addition, dissolution of excess CO2 acidifies the oceans, which can affect oceanic biosystems. Anthropogenic influences, for example from agricultural practices, habitat loss, and climate change mean that approximately 1 million species are now at risk of extinction globally. We therefore need to drastically limit CO2 emissions to mitigate the impacts we are having on our planet via the carbon cycle. We’ll look at species conservation in relation to climate change more in Step 3.19.