This content is taken from the UNSW Sydney's online course, Through Engineers' Eyes: Engineering Mechanics by Experiment, Analysis and Design. Join the course to learn more.
View course

PLEASE NOTE: This course was retired on 20 Aug 2018. This means it is no longer being updated or maintained, so information within the course may no longer be accurate. FutureLearn accepts no liability for any loss or damage arising as a result of use or reliance on this information.

0:09Skip to 0 minutes and 9 seconds Where to from here? You’ve learned how to draw free-body diagrams, the single most important part of engineering mechanics. It’s how we revealed forces. Forces are mysterious. We can’t see them, but they dominate an engineer’s worldview. Gravity must be defied, pressure must be contained, and acceleration must be produced. And you’ve learnt to characterize forces as vectors, which means that in our parallel mathematical world, they have specific characteristics. You can split forces into components. You can add them using the parallelogram rule. They respond to trigonometry. And when you carried out the design task, you learnt that managing forces brings responsibility. Lives can be at stake. These are all part of engineer’s eyes.

1:09Skip to 1 minute and 9 seconds But, there are simple configurations that you can’t analyze with this basic knowledge. You need to know about twisting effect, and that’s the topic for week 3.

This quick video highlights your progress towards Engineers Eyes. The concept wheel shows how it all fits together. 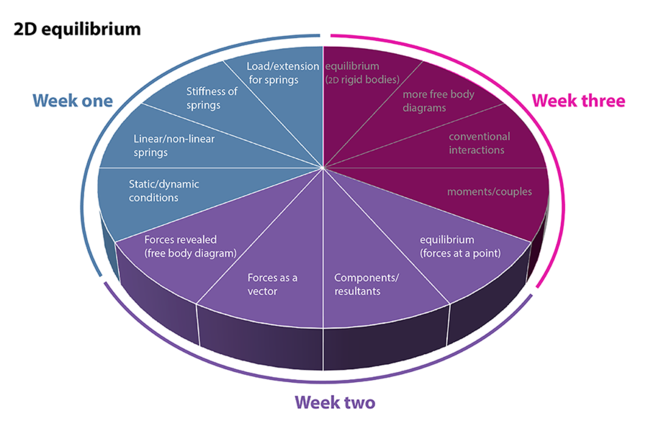 Are forces just a figment of our imagination? If so, they are a very useful one, for example we use forces to explain why an elastic band stretches when you load it.

When you draw a Free Body Diagram, you have to replace the interaction that the object previously had with its surroundings by force arrows. This reveals the forces.

You learnt that force is a vector, and you used trigonometry to split a force vector into components, or combine forces into a resultant.

Your next concept was equilibrium (Newton’s first law). By combining equilibrium with Free Body Diagrams and trigonometry you could find unknown forces - forces in the cables that support a loudspeaker in fact. A very practical application.

These are to get you started. Share any other thoughts you’ve had.

Don’t forget to share your experiments on the Through Engineers’ Eyes Padlet wall for this week.

Through Engineers' Eyes: Engineering Mechanics by Experiment, Analysis and Design