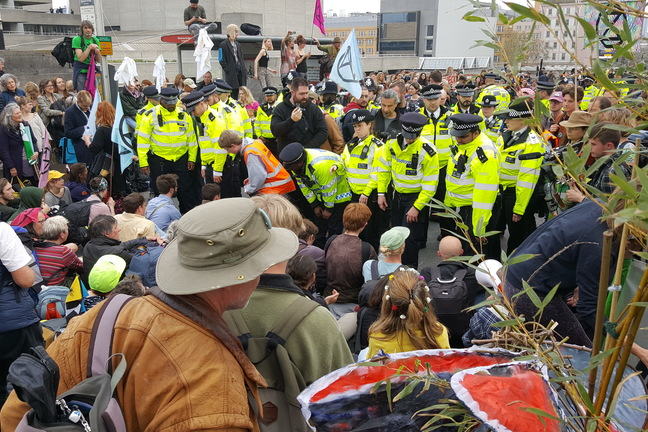 Society’s role in speeding up or slowing energy systems change

Through active organisation civil society plays an important and powerful role in speeding up or slowing down change in our energy systems. Such routes to engagement are examples of how civic participation and democracy can shape energy system change.

Civil society organises in various forms, including big membership organisations (such as Greenpeace), local community groups, or other communities of interest. The approaches used by these groups vary, including informing the wider public, pressuring politicians, investing in practical solutions, protest, and direct action. In this article we explore some examples of where civil society has sped up or slowed down change in our energy systems. This includes a discussion of the very recent rise in grassroots organising among young people and local communities on climate change.

Extinction Rebellion (XR) is a relatively new international movement that uses non-violent civil disobedience to push for radical change in order to minimise the risk of human extinction and ecological collapse. Starting in the UK in 2018, with a Declaration of Rebellion, the movement has sought to create a sense of urgency to tackle the climate crisis, so including a programme of peaceful protest and civil disobedience. XR has 3 core asks for governments: tell the truth about the climate crisis; act now to reduce emissions to net zero by 2025; create and be led by a citizens’ assembly on climate and ecological justice.

In April 2019 XR organised an International Rebellion which saw people taking to the streets in more than 80 cities in 33 countries. In London tens of thousands of people were involved in demonstrations over several days which included over 1,000 arrests for peacefully blocking key locations in the city. 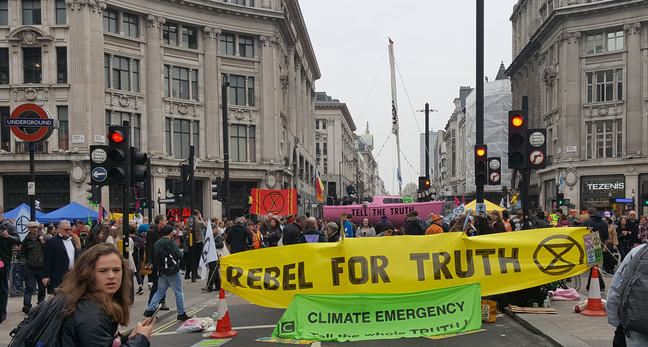 Linked to XR and wider societal action, there has also been an emergence of local communities, councils and other organisations declaring ‘Climate Change Emergencies’. In these declarations local residents have called on their civic leaders (be that parish, city, county, district, province or region) to make a commitment to be ‘zero carbon’ within a certain timescale, often by 2030. After five months of this campaign, more than 400 councils in five countries had made declarations, representing 38 million citizens worldwide. In the UK over 50 councils representing more than 20 million people had declared a climate emergency.

In practice, many of the councils who have made such a commitment then have to establish how they can fulfil it. This is providing a space for local people and organisations to discuss what sort of zero carbon world they want and how to achieve it. This bottom up action also pushes pressure back up the political system to national governments, as it both furthers the case for national climate change emergencies to be declared, and leads to calls for legislation, policy and support from national government to help local areas to drive change. We are still in an early stage of the climate emergency movement and the extent to which such declarations can accelerate change at both a local and national level is yet to established, they do however represent a significant new stage in engaging people across a range of scales in debating what a decarbonised society might look like.

The Swedish teenager Greta Thunberg started a school strike for climate in front of the Swedish Parliament in August 2018, missing lessons every Friday to protest. Her argument was that not enough was being done to tackle climate change and there was little point going to school to study for a future that will not be there. Her individual action and belief that one person can make a huge difference, inspired other students around the world to also strike from schools on Fridays, under the banner of Fridays for Future. The movement has rapidly grown with figures from March 2019 suggesting that there were 1.6 million strikers across 125 countries.

Meanwhile Greta has gone on to speak to Governments, business leaders, public events and the UNFCCC climate conference in Poland in 2018. Her unflinching honesty and direct language continue to inspire and challenge leaders and society to take rapid action to tackle climate change.

The idea of a Green New Deal emerged in a number of different areas in the late 2000s but has become much closer to being implemented only recently. Much of the focus has been on the US, where a campaign from the Democrats has called for a Green New Deal to trigger a rapid decarbonisation of the US economy. The campaign called for broad mobilisation to rapidly build a new energy system founded on renewable energy, as well as government investment in public transport, regenerative agriculture, conservation and restoration of critical infrastructure, including ecosystems. The programme is broad, involving a full social, economic and ecological transformation, and it prioritises democracy and equity as we systematically shut down damaging extractive industries, shifting to cleaner sustainable practices. 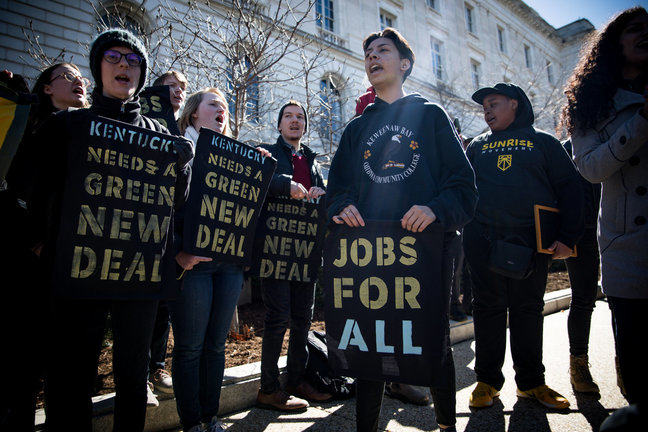 Young campaigners from the Sunrise Movement in the US lobby Senators for a Green New Deal. © Photo by Rachel Warriner.

Civil society, by organising themselves and coordinating with experts, has generated popular momentum behind a plan for transformative change. This campaign from grassroots groups, such as the Sunrise Movement, and the US Green Party has gained prominence partially due to high-profile support from US Congress member Alexandria Ocasio-Cortez who has championed the proposal politically, raising a House Resolution in Congress. By May 2019, the call for a green new deal was defeated in the US by the Senate Republicans, but it is unlikely that this will be an end to it in the US. Calls for a New Green Deal have also developed in other countries including the UK, EU and Australia.

Civil society can also play an important role in supporting or opposing specific energy technologies or innovations. An example can be seen in fracking. Over recent years, the oil and gas industry has turned to more extreme forms of extracting fossil fuels. A prominent method is hydraulic fracturing (or fracking) where bore holes are pumped with high pressure water and chemicals to crack the rock and release gas or oil.

Resistance to fracking has emerged around the world over the past decade. In Lancashire in the UK when fracking applications were submitted, locals worked together to voice their opposition based on concerns regarding climate change, water pollution and seismic activity from drilling. More than 27,000 local people wrote to their local politicians at the County Council in 2015 to express their opposition. This pressure was effective and the council rejected the application to frack, but this was overturned by central government a year later.

At this point, local communities changed tactics and began a campaign of direct action, obstructing access to the fracking site by ‘slow walking’ in front of lorries and blocking access to the site. Local community groups were joined in their campaign by other environmental campaigning organisations, such as Friends of the Earth, and national politicians.

This civil society action, first through political pressure and then through protest, slowed down progress on the site – 18 months after getting the go-ahead from central government, the company was 9 months behind schedule. Every day that the site was not able to work cost the company £94,000. This civil society campaign also helped raise the profile of the site meaning that when earth tremors were felt near the site, they were heavily covered by national media.

In addition to fracking, there are many other examples of how society can slow down energy system change, often linked to opposition to a specific technology. For example, in the UK many developers of onshore wind projects failed to engage with local communities, who responded by opposing developments. This ultimately led to a national political response which effectively bans new onshore wind projects from happening. There is significant evidence that where communities are engaged in, or own part of, a renewable energy development levels of support are much higher.

Focusing energy infrastructure decision-making at the national level can also impact on social acceptance. In the UK work by the Green Alliance has highlighted that the public can feel excluded from discussions and decision-making on the siting of infrastructure and that this can lead to disengagement and distrust, which can ultimately result in protest and delays.

Carbon Brief. Why some US Democrats want a ‘Green New Deal’ to tackle climate change. Available at https://www.carbonbrief.org/explainer-why-some-us-democrats-want-a-green-new-deal-to-tackle-climate-change

Roberts S. Campaign for Sustainable Energy. We should have shouted louder. Available at https://www.cse.org.uk/news/view/2003

What is coming up in week 4?