This content is taken from the University of Twente's online course, Ultrasound Imaging: What Is Inside?. Join the course to learn more.
View course
2.10

0:00Skip to 0 minutes and 0 seconds SPEAKER: For making an ultrasound image, a transducer has to be able to listen in a focused manner inside the tissue. But it should also be able to focus sound into the tissue. But how does it work. How can it focus. That will be the topic of this video.

0:22Skip to 0 minutes and 22 seconds An ultrasound transducer makes a thin slab of ultrasound. This slightly focused slab is made by a cylindrical lens. It is a fixed lens making a fixed focus.

1:27Skip to 1 minute and 27 seconds So now suppose that we want to listen to the sound emitted from point A in the issue. We know where point A is, and we know the speed of sound. So we know the time a wave takes to travel from point A to each element in the array. And now for each element and for each signal, we create a delay that we can calculate. All the signals in the end arrive at the same time in the transducer cable, and we can add them up. And in this way, we’ve created a kind of focus. So in this manner, we’ve created a digital lens. And this also works the other way around. We can give an electrical pulse to each element.

2:14Skip to 2 minutes and 14 seconds And in this case, the outer elements are fired, as we can say, earlier than the inner elements. And this creates a focused ultrasound beam, because now, in the end, all the ultrasound waves overlap in point A. This is a slightly more realistic simulation. Now we see some ripples and side lobes, but we have a focus.

2:42Skip to 2 minutes and 42 seconds And here the elements are fired in such a way that we get a beam under an angle. And this angled beam is very important for the so-called compound imaging. This compound imaging will be the topic of a later video. focussing can be very important for giving images a better quality. Left, we have an image with a shallow focus. And on the right-hand side, we see an image with a deep focus. And although the difference is not tremendous, we see a difference in sharpness of these regions and these regions, with shallow focussing and with deep focussing. This way of focussing ultrasound is called dynamic focussing. And the transducer with which we can do this is called a phased array.

3:37Skip to 3 minutes and 37 seconds And this manner gives you a flexibility for making various beam shapes, and for sending sound out in the direction that you want.

3:48Skip to 3 minutes and 48 seconds Dynamic focussing is a major technical feat, and it allows you to scan the tissue without moving the probe.

We now know that ultrasound can be used to get lots of information from inside the human body. But we don’t yet know how to distinguish all the information that is coming back to us.

The secret to this is dynamic focusing. Focusing is the process of timing your piezo-electric elements such that the resulting wavefront adds up in intensity at some points. A specific depth can thus be in focus.

Using ultrasound in a focused manner, we can distinguish all the different points from which information is coming. Wiendelt Steenbergen explains with clear animations how this works, and how it is used to our advantage.

Eventually, the end-result of this feature can be observed in the following two images: 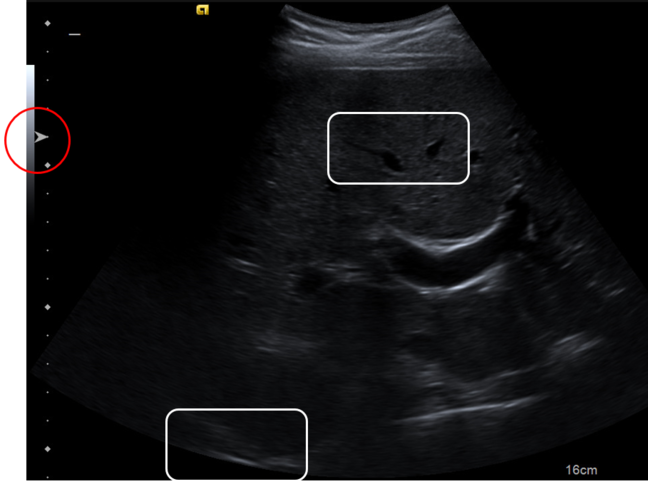 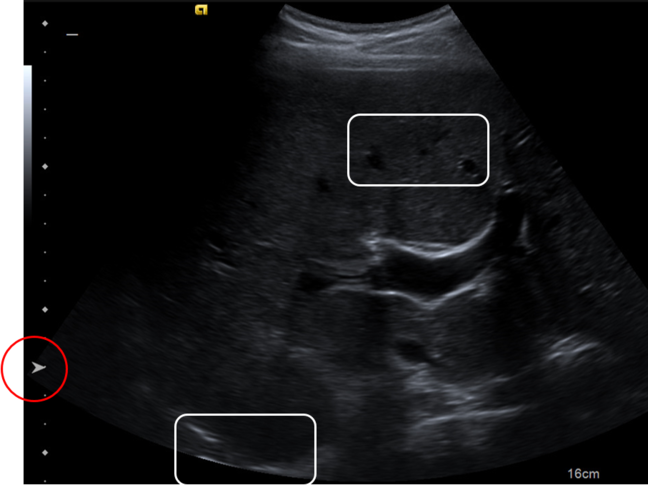 Notice the sharpness in the areas marked by the white rectangles. The focus triangle on the left in the red circle indicates the depth to which focus is set.