The autonomic nervous system controls the gastrointestinal tract. It works on the smooth muscle and its action is involuntary. It is comprised of a complex system of parasympathetic and sympathetic nerves:

Sensory and motor innervation of the bowel and pelvic floor is through the vagus nerve, the nervi erigentes (pelvic splanchnic nerves), direct sacral root branches and the pudendal nerve.

The above demonstrates the complexity of the extrinsic nervous control of the bowel and pelvic floor.

The structure is illustrated in the diagram below, this further demonstrates the complexity of the nervous system of the bowel. 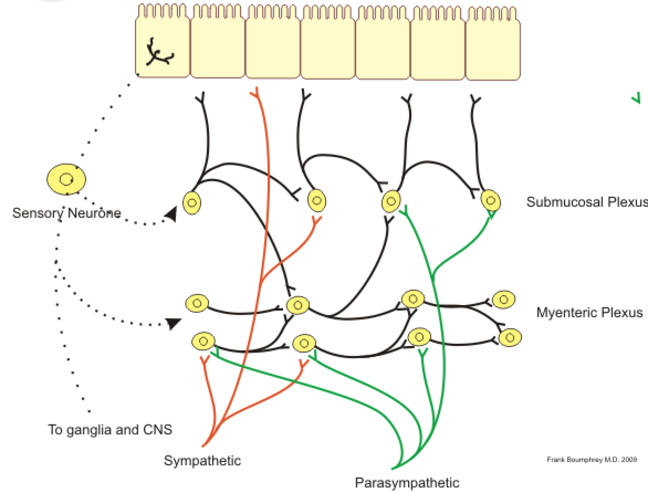 The enteric nervous system gives the colon the ability to produce peristalsis, a wave-like flow of contraction that pushes the stool, in stages, towards the rectum and anus.

It is also responsible for the gastro-colic reflex. This reflex is very important for bowel control and will be discussed in the next step.

There are some important clinical practice points relating to the bowel physiology.

© This work is a derivative of a work created by Boumphreyfr, licensed under CC BY-SA 3.0 International Licence adapted and used by the Association for Continence Advice.

Do bladder and bowels get sufficient media and government recognition?