This content is taken from the University of Southampton's online course, Understanding Insulin. Join the course to learn more.
View course
2.4

How does insulin change in type 2 diabetes?

Type 2 diabetes occurs predominately in adults and is typically associated with obesity and inactivity.

Initially, the body is insulin resistant - this means that even though the pancreas is producing insulin, the cells in the body do not respond to it normally.

It is not totally understood why this happens but it may be due to defective cellular pathways including binding of insulin to its receptor where it triggers its actions, dysfunctional signals sent from receptor binding, or due to overeating, the insulin receptors are all fully bound with insulin and so insulin can have no additional effects as there are no spare insulin receptors. 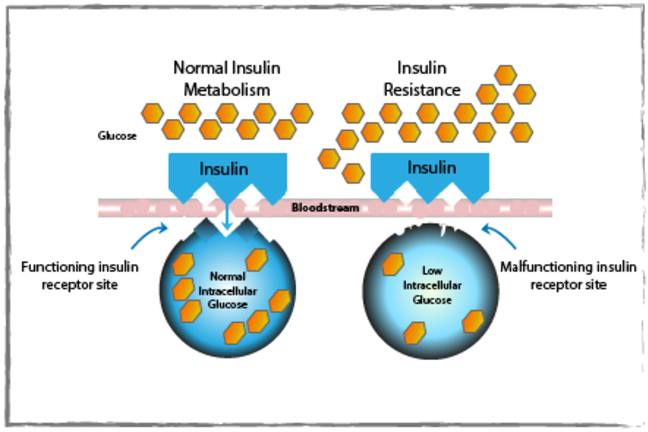 How insulin resistance affects the organs

Insulin resistance affects many of the organs in the body, including liver, muscle and adipose tissue that are important for regulation of glucose homeostasis.

Insulin resistance also affects other organs such as the ovaries (polycystic ovary syndrome) and the blood vessels (contributing to heart disease, and vascular diseases such as stroke and peripheral vascular disease).

Did you know? Some people with type 2 diabetes do not ever need insulin treatment but require medicines that make their cells respond better to insulin. For further information on medications for type 2 diabetes, see the Diabetes UK section on tablets and medication.

Why some people require treatment with insulin

In many people with type 2 diabetes, the β cells work extra hard to produce more insulin to try to overcome the insulin resistance. This leads to exhaustion of the β cells and their destruction, and a reduction in the amount of insulin produced.