This content is taken from the University of Southampton's online course, Understanding Insulin. Join the course to learn more.
View course
4.5

In this section we provide you with an overview of the side effects that the use of insulin can be associated with.

We start with looking in detail at hypoglycaemia before looking at other side effects including weight gain and allergic reactions. Premature occlusion (blockage) of key blood vessels caused by long term uncontrolled diabetes is also considered.

Hypoglycaemia and why it happens

Without diabetes, the body knows to stop releasing insulin from the pancreas if glucose levels are low.

Did you know? In type 1 diabetes, the level of injected insulin will not decrease in response to a low blood glucose level.

Hypoglycaemia occurs therefore as a result of a relatively high blood insulin level with an associated low blood glucose level and can make people using insulin for diabetes feel unwell.

Some of the symptoms of hypoglycaemia can include sweating, shaking, dizziness, headache, hunger, feeling irritable, blurred vision and poor concentration. 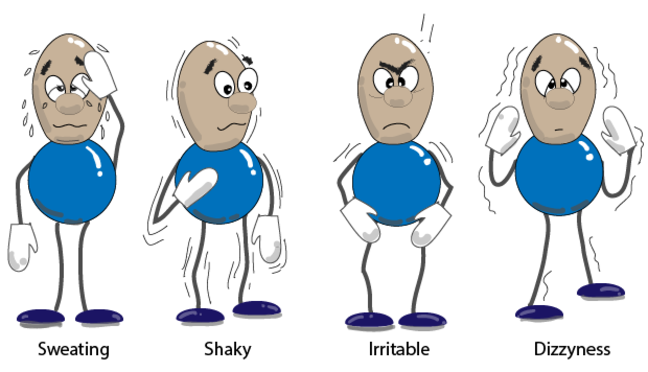 How to know if you are having a hypo

Imagine a ‘potentially’ stressful situation, such as watching a scary film or sitting at the top of a rollercoaster, about to go down.

How would you feel?

These can be stressful situations for most people and the symptoms experienced by some are similar to those that someone who is experiencing a ‘hypo’ (hypoglycaemia) may feel. The brain senses that glucose levels are dropping and sends out warning signs.

The warning signs would include: feeling anxious, having palpitations, sweating, feeling shaky, feeling hungry and experiencing tingling of the lips.

For those people with diabetes, if these symptoms are ignored, there is a risk of becoming drowsy, confused or having a seizure, as the brain cannot function properly whilst blood glucose is so low.

How to treat a hypo

These all contain 15-20g of glucose, which is an appropriate amount to take for a hypo. It is a good idea to keep suitable snacks close by all the time.

The most common reason for having a hypo is due to a rise in blood insulin levels or a drop in glucose levels. Common reasons for both are:

Hypoglycaemia can occur as a consequence of reduced oral intake due to:

Hypoglycaemia can occur as a consequence of increased glucose use due to:

Hypoglycaemia can occur as a result of relative insulin excess or increased insulin sensitivity due to:

It is very important after a hypo to think about why it happened and what can be done to reduce the risk of another.

How to reduce the chance of having a hypo

Sometimes after a hypo, the initial fast acting glucose containing snack is followed by a food item that contains slower acting glucose, such as a sandwich, cereal or a piece of fruit. The blood glucose level should also be measured again to check it is rising. The insulin dose with the next planned meal may need reducing.

Medical advice should be sought if concerned or if recurrent unexpected episodes of hypoglycaemia occur. Try to take breaks for a glucose based snack when physically busy and ensure that the insulin is administered carefully and correctly.

So let’s find out, in the next step, how Carlos copes when he experiences an episode of hypoglycaemia.