This content is taken from the University of Southampton's online course, Understanding Insulin. Join the course to learn more.
View course
2.6

What happens when insulin levels run low in type 1 diabetes

If they feel unwell, people with diabetes need to take special care as any illness, even if not specifically related to their diabetes (like the flu) can cause their blood sugar (glucose) level to rise.

Did you know? Part of the body’s natural response to illness is to raise the circulating blood sugar level. This may mean that people with diabetes need to take a higher dose of insulin than usual, rather than reducing the dose or not taking any.

Reducing an insulin dose or stopping it altogether can lead to serious problems and often may cause diabetic ketoacidosis (DKA). This is an emergency state in diabetes which requires hospital based treatment.

DKA is a dangerous complication that is caused by a lack of insulin in the body. It occurs when the body is unable to break down glucose, because there is not enough insulin.

Instead, it breaks down fat as an alternative source of fuel. This causes a build-up of a by-product known as ketones, which disrupts the metabolism.

The more ketones produced, the more ill a person with DKA becomes and left untreated potentially fatal complications can occur.

The diagram below illustrates the process of diabetic ketoacidosis. 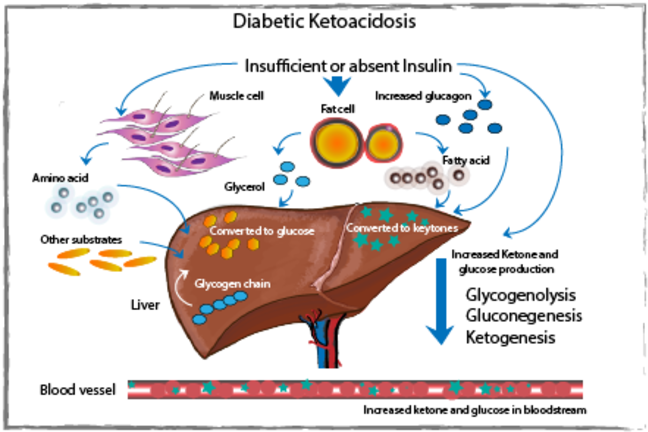 Figure: the process of diabetic ketoacidosis

Did you know? Before insulin was used in the treatment of diabetes, children dying from DKA were kept in large wards where they were mostly comatose until they, inevitably, died. Find out more about one of medicine’s more dramatic moments when insulin was first used to successfully treat DKA in January 1922.