Understanding Money: the History of...

0:06Skip to 0 minutes and 6 secondsNICKY MARSH: So we've just been reading about the history of financial advice and the different kinds of genres that it has taken across the past three centuries. And I've got around me today some colleagues who've been working with me on writing this history. I mean, what's better just to have a conversation now about drawing out what's most interesting and relevant about this history. So our first question, I think, the question that began this project for us all was, why read financial advice? What does it tell us about the cultures of speculation? And how has it changed over the course of the last three centuries?

0:37Skip to 0 minutes and 37 secondsHELEN PAUL: Well, it starts off, I think, with Thomas Mortimer's book, Every Man His Own Broker, which explains how to go into the stock exchange-- which, at that point, was Exchange Alley and some coffee houses-- and how to do the very basic things of buying and selling shares. What was a broker? What did the market do? What happened when prices went up, or when they went down? So it's just acclimatising people who've never really thought about the stock market before as what is this new phenomenon and how can they become engaged with it. But then, Mortimer's book really is the only thing on the market for several years.

1:23Skip to 1 minute and 23 secondsIt's only later you start to get all these different types of financial advice books.

1:29Skip to 1 minute and 29 secondsNICKY MARSH: And how did it change when we move into the 19th century, James?

1:32Skip to 1 minute and 32 secondsJAMES TAYLOR: I think there are a few interesting things going on in the 19th century. Certainly, at the start of the century, there's an emphasis much more on information than advice. I think advice in print form, at least, is pretty hard to come by. What you do get are these kind of quite slab-like guides that talk you through some of the basics of investing but are much more focused on conveying the data that a market professional is going to need on a day-to-day basis. They're not really targeting novice investors. And these books, they're quite expensive to produce. They're quite expensive to buy. So I think that freezes a lot of people out of the market.

2:11Skip to 2 minutes and 11 secondsI think as we go a bit later into the century, you get a diversification of genres. So you get, certainly, financial journalists becoming involved in writing books that kind of describe the market, and often, with quite surprising emphasis on fraud, instability, and failure. We've got a couple of examples there of the famous financial journalist David Morier Evans who just the titles, I think, tell you what you need to know, Speculative Notes and Notes On Speculation and this one here, Facts, Failures, and Frauds. And there was a kind of dual game going on there, that there's a kind of warning, and ostensibly, the message is stay away. This is a dangerous marketplace.

2:53Skip to 2 minutes and 53 secondsYou shouldn't get involved unless you know what you're doing. But there's also this subtext of almost titillation that this is an exciting place where fortunes can be lost, certainly, but also won in an instant. But it's really around this time around mid-century that you get the birth of what we would probably understand as the modern financial advice manual. This is much more targeted at the novice investor, really walking you through all of the basics, and beginning to explain some of the maxims and rules of thumb of successful investment. They're often priced at just a shilling or even sixpence. They're aiming for a mass market, really.

3:33Skip to 3 minutes and 33 secondsAnd that's where we begin to get the more interesting types of advice, which I think, gradually, as we get into the later 19th century, evolve into the kind of systems culture. Here's an infallible system that you can make your fortune on the stock exchange.

3:49Skip to 3 minutes and 49 secondsNICKY MARSH: And that's what we get in the early 20th century. Is that right, Paul?

3:51Skip to 3 minutes and 51 secondsPAUL CROSTHWAITE: Yeah, that's right. So the heyday of the investment advice manual was really the early 20th century United States where, as James was talking about, the idea of the market guru with a system that will beat the market really comes to the fore. And it's no coincidence, of course, that that's also a period where speculation is really democratised in a new way. The 1920s, as many as 25% of households in the United States were invested in the stock market. By 1929, investment is a real everyday fact of life. And so there was a real market for these kind of guides.

4:32Skip to 4 minutes and 32 secondsThe real debate in the period was between the technical analysts who claimed that you could follow patterns and rhythms in the stock market in the movement of prices to guess what the next move would be, and the fundamentalists who believed that you had to focus on the fundamental realities of the economy of a particular company and really get down to the basics of what made a company valuable. This was a debate that played out throughout this period. Although I think many people felt that the Wall Street crash of 1929 signalled the failures of the technical approach and really made the emphasis on what's really the underlying value ever more important.

5:12Skip to 5 minutes and 12 secondsNICKY MARSH: Thank you. And by the 20th century, of course, even that belief in those systems had started to waver as we have people in the universities proving that there was no system that worked. And actually, financial advice goes back to its origins at the start of the 19th century as advising people not to invest or at least not to pick individual stocks anymore, that they should trust the professionals. And we move to thinking about the mutual funds instead.

What is the role of financial advice?

With the work of Wall Street increasingly part of Main Street, these legions of amateur investors needed advice. And the publishing industry obliged.

From the 1880s onwards, in both Britain and America, there was an explosion of writing about the stock market. Financial journalism, stock broker memoirs, Wall Street fiction and investment advice manuals all fuelled a popular fascination with the stock market. Earlier in the century, guides to the stock market tended to take a moralising approach. But from the middle of the nineteenth century, books and articles began to provide factual information.

They explained how the stock market worked, and introduced tables and charts of statistics. By the end of the century, the guidebooks increasingly offered practical advice on how to make money through speculation. Some of the books merely compiled general maxims, such as buy cheap and sell dear. Others offered more precise instructions on how to respond to particular market trends.

Much of the advice was on which stocks to buy and when to sell them. But others writers focused instead on the kind of personal qualities needed for successful speculation. The ideal speculator was cool, calm and manly. It comes as little surprise that most financial advice was written by men for men. Women were seen as too emotional and unpredictable. But the reality is that a quarter of investments in this period were held by women, who were often well informed about the market. Hetty Green, for example, ran her own brokerage on Wall Street and amassed a sizeable fortune. Known as the “Witch of Wall Street,” Green was an astute investor who played up her country-bumpkin ways for the press. 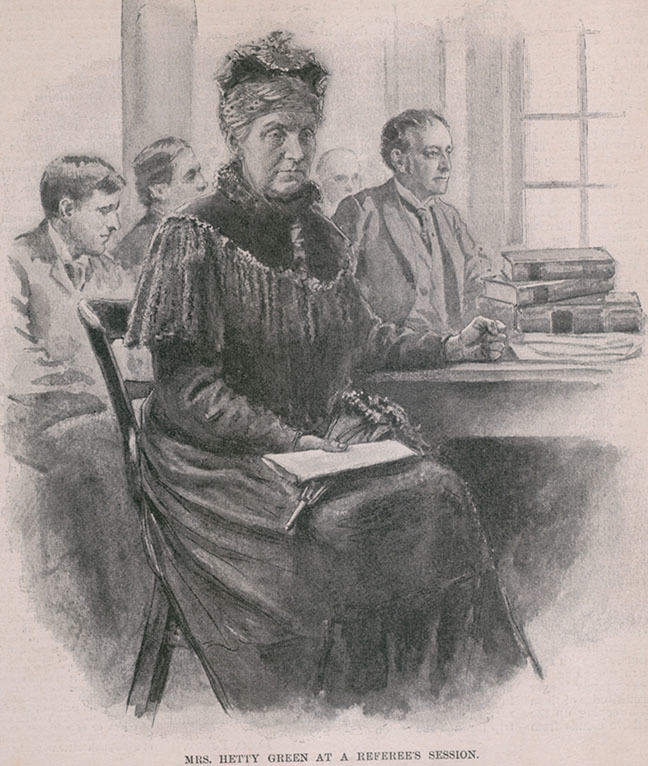 Hetty Green 1834-1916 at a ‘referee’s session’ possibly when she disputed the accounting of Henry A Barling the surviving executor of estate of Hetty Green’s father Edward Mott Robinson. Ca. 1895. ©Shutterstock/Everett Historical, 2019

Many of the books were written by brokers in response to popular demand. They emphasised their professionalism and made investment seem safe. Some books, however, served as glorified adverts for the brokerage firms that offered them for free. In other cases, they were part of a scam, designed to tempt the unwitting into foolish speculation.

Books discussed in the video

This step is the first of five steps covering a roundtable discussion about financial advice. Each member of the team shares information about his/her area of specialism:

Can money be used to disseminate ideas and values?

What colour are Dorothy's shoes? Or what does The Wizard of Oz tell us about money?

History of the Global Financial Crisis