0:13Skip to 0 minutes and 13 seconds MOUNIR LADO: The risk factors for VL in South Sudan with the conflict is displacement. Huge population, 1.5 million was displaced internally. So people move from non-endemic areas to endemic areas. So this is exposing them to VL. So the other group also move, because it’s almost like ethnic conflict, whereby you have to identify yourself, where is your group. Some people have to move from the endemic areas to go to other areas that are non-endemic. So moving there now, they’re establishing new focis for VL. With the displacement, you move because of the fear, for safety. You move to the areas where you don’t have shelter. And so you lack shelter, and this exposes you to the bites of infected sandflies.

1:26Skip to 1 minute and 26 seconds And then later, to VL. And with the displacement, also, you leave your farm. You leave your cattle. You leave your assets. You just run for your safety. Then some of the people, they were displaced even more than two times. You walk for one day, two days without food, even. Even when you go and settle in places, because you have left your farm, you have left your cattle, and your money, everything now, you become food insecure. Which that group, later without food. And that’s– you have seen most of the areas in South Sudan were declared as a famine because of that. Because most of the people have to leave their areas, and go to area where you become dependent.

2:37Skip to 2 minutes and 37 seconds So displacement, basically, with the conflict to the areas of endemic, outside area of endemic, going to areas where Acacia (the tree) is there without shelter. You move, you go, no food. The facilities were destroyed. Lack of health facility. Putting all these factors together, this is where you see increase in numbers of the VL. And it was true in 2014, where we saw, in 2013, about 2,000 cases. Then in 2014, we saw about over 7,000 cases, because of the displacement during the conflict.

It is important to understand that an increase in VL cases is related to many things. VL is a disease that comes in “epidemic waves”. This is illustrated in the graph below that documents the number of VL cases over time in three endemic countries in East Africa. 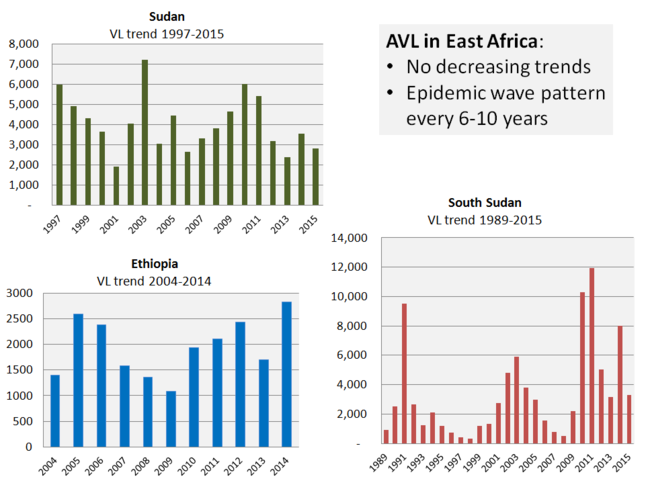 Risk factors for VL should not be viewed in isolation. Climatic and social factors, environmental change and population trends (like increases in movement or urbanisation) can all influence the spread of visceral leishmaniasis.

In certain situations, risk factors are exacerbated and contribute to each other. In the context of conflict and insecurity, for example, patients are often unable to access medical care services. During conflict, massive displacement may take place, which can be coupled with several other important risk factors for VL, such as food insecurity and high malnutrition rates, or poor housing and exposure of people to infected sand flies.

In the following interview, Dr Mounir Lado from IMA World Health in the Republic of South Sudan explains how risk factors for VL can be exacerbated in the context of massive displacement.