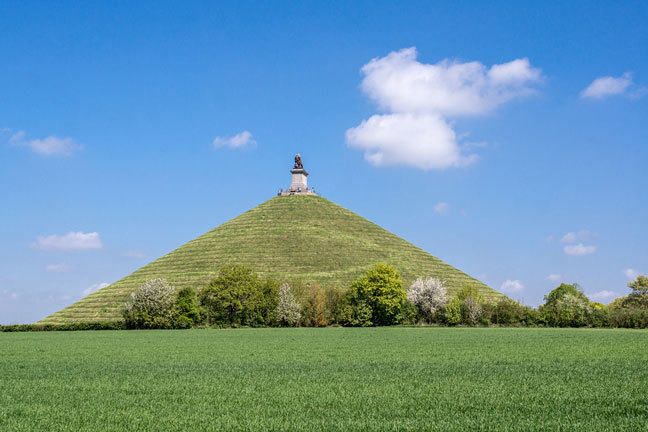 The Lion Mound at Waterloo

The news of the Battle of Waterloo was momentous. There was widespread rejoicing at the conclusion of the war: this was an occasion equivalent to VE or VJ Day at the end of the Second World War. Public celebrations took place across Europe. All wanted to know about the battle: those who had fought in it had a special tale to tell and had a share in the celebrity of the event.

Activity
As an activity through this week, we would like you to return to the map and photo walls of Wellington and Waterloo that we set up at the start of the course. What patterns can we see in commemoration? As you work through the steps this week, you will see that memory of the Duke and Waterloo was shaped in different ways, at different times, by different groups. Do share with us your thoughts on what you have discovered.

If you want to add markers and/or photos, here is the guidance

Marking Waterloo
Waterloo had to be marked in a particular way: posterity needed to know what had happened. Thanksgiving and commemoration were therefore closely intertwined. A measure of the interest can be gauged by the public subscription to relieve those who had suffered in the battle which was opened in the City of London on 28 June. By 9 August 1815, the fund had reached £100,000. Other subscriptions were opened elsewhere around Britain.

The public was fascinated by accounts of the battle and Waterloo itself was a destination for tourists almost from the conclusion of the battle. The earliest watercolours of the field of battle which we now have date from 19 June 1815 — and their raw images of the unburied dead, stripped by those seeking plunder, are a striking reminder of the aftermath of war. A remarkable earthwork, the Lion Mound, was constructed on the battlefield on the orders of William I of the Netherlands, starting in 1820 but not complete until 1826 — to mark the point where his son, the Prince of Orange (and future William II) was struck by a musket ball, falling from his horse. The lion on top of the mound was cast from French cannons captured during the battle and has its paw on a globe, signifying the scale and importance of the victory.

Wellington after Waterloo
What role did Wellington play in these activities? The Duke of Wellington was victor and hero: he was esteemed both as one of Europe’s leading generals and statesmen — and its saviour. Statesmen and sovereigns held him in high regard. At the same time, he had a position in popular esteem that was unrivalled. He sat for paintings, there were innumerable public statues and monuments; his distinctive profile — ‘Old Nosey’ — made him instantly recognisable from caricature to high art. He escorted distinguished visitors to Waterloo — George IV went there in September 1821. The Duke received many gifts, from the presents of grateful sovereigns to tokens of recognition that might come from almost anyone. On a personal level, people called their children ‘Arthur’, or wanted the Duke as a godparent, if the child was born on Waterloo day or Wellington’s birthday (the Duke tartly remarked on the inconvenience it would cause if everyone born on those days were called after him). He was represented in souvenirs, he was sought out as a patron or honorary president for numerous societies, from general social causes to bodies such as the Wellington Birthday Society of Stockport. Wellington had an especial regard for the veterans of the battle — from overseeing the arrangements for the distribution of prize money to those who had participated in the battle to assisting deserving cases wherever he could.

The creation of Wellington’s image
The Duke had a job to do, however, and in 1815–18 the image that was created of him in Great Britain was largely shaped in his absence. The Duke was overseas for much of the time from his appointment as a plenipotentiary to the Congress of Vienna in February 1815 until late 1818: after Waterloo, he commanded the allied army of occupation in France and represented Britain in the autumn of 1818 at the Congress of Aix-la-Chapelle. Returning to England, at the start of 1819 he entered the British cabinet and continued both his political and military career until his death in 1852. At the end of his life, the white-haired old man, the senior statesman and general of the early Victorian period, was regarded with widespread affection, even if his politics, as prime minister in 1828–30 and subsequently as leader of the Conservatives in the House of Lords through the period of the Great Reform Acts and later had been considered reactionary. He had a political legacy, but it lay in his pragmatic response to political problems and their resolution — Roman Catholic emancipation, for example, was a key political achievement of Wellington’s government of 1828–30 — rather than the sweeping reforms that had gone hand in hand with Napoleon’s continuation of the work of the French republican governments, such as the Code Civil (a unified statement of French civil law, replacing the patchwork of feudal custom). Wellington’s funeral was an occasion for national mourning, uniting the country in memory and recognition of its hero.

How was Napoleon regarded in defeat?
The great differences after Waterloo, of course, were that Napoleon was defeated, he was isolated on St Helena, and that he did not live beyond 1821. His career was at an end, but he was still a popular figure in some quarters. In exile, however, he saw few people: any hope of returning to Europe was quashed. He wrote his memoirs, reshaping history to his own perspective — the Battle of Waterloo was endlessly refought. More importantly, he wished people to value his connection to the Revolution and his contribution as a republican and a liberal. In the belief that his empire had brought a new liberalism to France, his writings were to provide a retrospective coherence to all that he had done.

After Napoleon’s death in 1821, the Bourbons had little interest in bringing his mortal remains back to France — even in death, the impact Napoleon might make was unpredictable. From around 1830, it became less difficult for Napoleon’s supporters and followers to argue his cause. Soldiers in particular remembered their victories and their leader with affection. His remains were returned to Paris in 1840, to be met by huge crowds, followed by burial at Les Invalides. The myth endured and, beyond the reforms that had come under Napoleon, there was a political legacy — Bonapartism. Beyond adherents of Napoleon’s descendants, their claims to government and what this might mean in France itself, Bonapartism more generally presented an archetype of a strong leader, an authoritarian, yet a man capable of achieving popular support particularly against an elite.