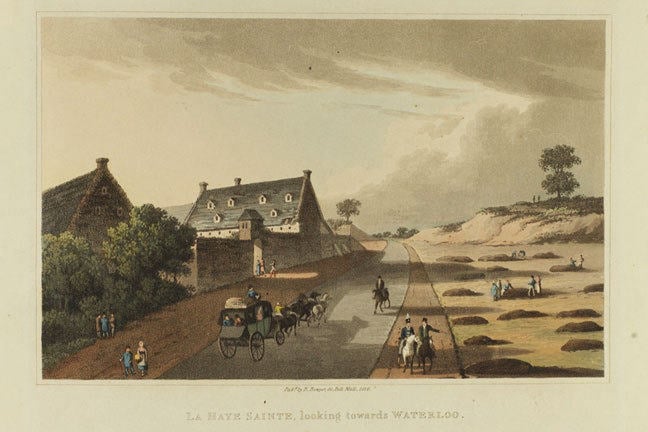 Visitors to the site of Waterloo view La Haye Sainte. University of Southampton Library, MS 351/6/7. The excavations are likely to be the work of souvenir hunters.

Visiting battlefields was not a new phenomenon that developed in the aftermath of the Battle of Waterloo. There was a long tradition of visiting these sites: for example, there had been visitors to the battlefields of the Iberian peninsula during and following the Peninsular War. What did evolve in the post-Waterloo period, and as the nineteenth century progressed, however, was battlefield tourism as a more formal and commercial enterprise. Guided tours of the battlefield were available from 1815, but from the 1830s, notices appeared advertising visits from England to the battlefield of Waterloo.

Why did people wish to visit?
At Waterloo the first visitors, Belgian peasants, had a very practical aim as they were there looking for plunder. As early as the morning of 19 June, there were the curious from Brussels. Visitors might visit battlefields in homage, as a pilgrimage to the site where the fallen had made their sacrifice. Others were simply intrigued to view the location where such a significant event had occurred. For many British visitors, to experience the sense of place was a fervent patriotic response to the battle. Battlefields had a significant role to play in the making of memory and in the construction of narratives relating to national character and identity — and nowhere was more important in this regard than Waterloo. As time progressed, for many of those visiting the battlefield, their experience was of an imagined or interpreted past, defined by the many memoirs and accounts of the battle, or shaped by the images and paintings of the encounter.

A visit to Waterloo quickly became an expected part of a more general tour of Europe, part of the rites of passage of young men of means — the ‘grand tour’ was possible once again now that peace had returned to the Continent. Wellington was not at all impressed by this. Lord Stanhope reported his comments, in the notes he kept of the Duke’s conversations: ‘I hope the next battle I fight will be further from home. Waterloo is too near: too many visitors, tourists, amateurs, all of whom write accounts of the battle.’ The amateurs, as defined by Wellington, included literary and artistic figures. Lord Byron, Robert Southey (the poet laureate) and Walter Scott, as well as the French writer Victor Hugo, all visited looking for inspiration for their writing. Among artists were David Wilkie and, later, Félix Philippoteaux. Lord Palmerston, who had been forced to flee revolutionary Paris as a child, was the British Secretary at War in 1818 when he visited the battlefield on his way to Brussels after attending a review of the Russian contingent of the army occuping France. He recorded his impressions of the battlefield in a letter to his sister, Elizabeth — he had also attended a grand review of the Russian forces in the army occupying France [see Document 1].

What did the visitors see?
Despite the plunder of the field by scavengers — the prizes of which furnished exhibitions like that at the Waterloo Museum — for the visitor in the early years after the event much of the detritus of war remained in place. The buildings stood, if in a parlous condition: Hougoumont and La Haie Sainte had been badly damaged (see the images in this step). Renamed the Wellington Hotel, La Belle Alliance became an inn, while opposite Wellington’s former headquarters the church of St Joseph became an unofficial memorial centre — here there were plaques, for example, to the dead of the Twelfth Light Dragoons, erected by the regiment. Visitors might purchase or acquire souvenirs from the battlefield and a thriving trade developed in memorabilia, from so-called authentic items retrieved from the battlefield to prints, maps and other souvenirs — a commercial practice sustained into the twentieth century. Cook’s Travellers’ Handbook — Belgium and the Ardennes of 1913 highlighted the dubious nature of some of these relics — Palmerston had doubted the genuineness of the French sword he had bought there in 1818: ‘It is hardly necessary to say that buttons, spurs, helmets and sword handles can be purchased cheaper in Sheffield or Birmingham where they are manufactured than on the field of Waterloo …’

Document 1: Letter from Henry John Temple, third Viscount Palmerston, to his sister Elizabeth, 29 October 1818
We left Cambray on Wednesday 21st as I believe I told you, reached Valenciennes and saw the grand review on Friday 23rd, and the inspection of the Russians on Thursday 22nd. It is needless to say that both, but especially the grand review, were magnificent sights and that we were gratified beyond measure. Frederick Ponsonby lent us two French horses which carried us remarkably well. On Saturday we went on the Maubeuge, a dirty filthy hole fit only for a Russian army, but I wonder that Woronzow shall not have managed better for himself. We were put into an unoccupied and unfurnished building out of which a Russian major had been turned to make room for us, and every civility was offered us by two servants who spoke no language but their mother tongue and wanted only to be tattoed and covered with a mat to pass for South Sea savages. Woronzow gave us a very grand ball in the evening at which the Emperor and Empress of Russia and Duke of Wellington were present.

On Sunday we started soon after daybreak and got into Sedan by 3 o’clock the following morning. We travelled very slow for the Russian artillery drivers had such an invincible affinity for ditches into one of which we actually descended and just stopped upon the brink of several that we soon discarded them and took to the French part, but the horses were always either tired or engaged and we worked our way slowly on by means of carthorses and ploughboys. At Sedan we found a comfortable quarter in the Duke’s house and on Monday went to see the Russian review on the plain of Donchery about three or four miles to the westward of the town. At ½ past 2 we dined with the King and went to a ball in the theatre. The dinner was in a riding house very neatly filled up with the Russia cloth preferred for the soldiers’ trowzers [trousers] and the scarlet cloth of which their facings are made and the ballroom was ornamented with the same materials, none of which were cut so as to be less useful afterwards. I could hear no tidings of William [Palmerston’s brother] who probably did not get my letter in time to make his arrangements for coming and very probably was absent from Frankfort when it arrived there. The Russian troops amounted to about 25,000 and made a very pretty review. They are in most respects of dress and discipline an imitation of the Prussians, but with a great deal of their steadiness they combine much of our quickness and activity and seem a more manageable army.

We did not leave Sedan till near 10 o’clock on Tuesday 27 and got on very slowly as there were swarms of grand dukes and generals, etc., travelling the same road who greatly interfered with our motions. However, we reached Dinant to breakfast yesterday morning, the 28th, and pushed on to Namur where we arrived about 4 in the afternoon, time enough to walk round and up the new fortifications they are making. The drive from Givet to Namur is almost all pretty but the latter half of the road from Givet to Dinant and the whole way from Dinant to Namur is beautiful; the road winds along the valley of the Meuse and to eyes which had ever since landing at Calais seen nothing but open flat country without one single feature of any sort or kind fit only for war and corn, the height and rocks and wood and a winding river was a prodigious treat and we were all admiration. The fortress now making at Namur is on the top of a hill 400 feet from the level of the river, a steep ascent. It will be strong but I did not like to hear the engineer who superintended the works expatiate so much as he did upon the advantage of some work pour encourager la garnison and the aptitude of others to faire peur à l’ennemi. I am afraid our allies the Belgians want much of that ‘spirit never to submit or yield’ which is necessary to enable them successfully to defend their territory.

We slept at Namur and came on to this place today, seeing Quatre Bras and Waterloo in our way. By the assistance of a good plan and description and some peasants we met on the ground, we satisfied ourselves completely about Waterloo — walked over the position of our army, picked some bullets out of the orchards of La Haie Sainte and Hougoumont, cut a bundle of sticks at the latter, enough to beat clothes during the rest of our lives, bought [a] French sword which probably never [saw] the battle, and came on here by ½ past 8 this evening. Tomorrow we see this town, the next day go to Antwerp and shall probably be at Calais on Wednesday evening. We go by Ghent and Tournay. We are in the Hôtel d’Angleterre, where we have been rejoiced to find a clean, well furnished room with a carpet and mahogany table, articles of luxury which we have not met with since Hilliacks.

Document 2: Early coloured engravings of the battlefield
Engravings like these were the postcards of the day, but were also widely on sale in stationers’ shops. The three images in this present step are part of a set published by R. Bowyer in London in 1816. They presented a romantic view of the site and the ruins — reminiscent of many other contemporary prints of the picturesque. 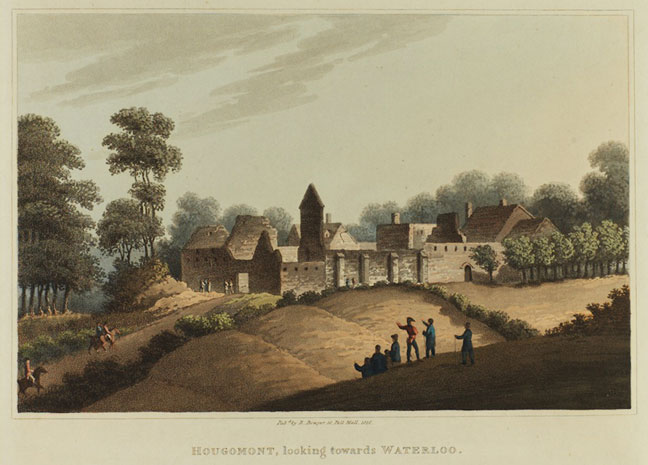 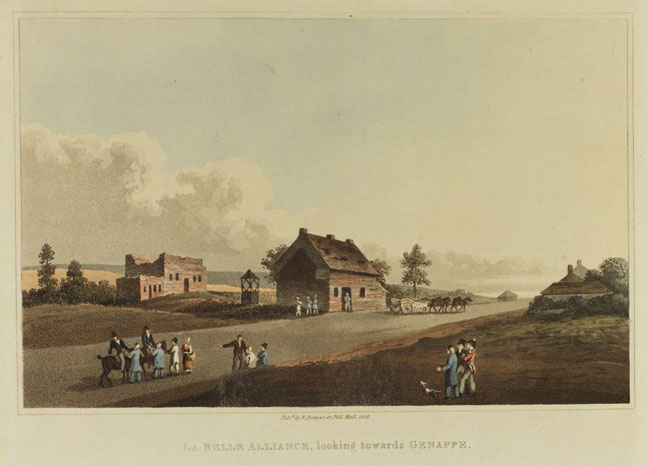