This content is taken from the Coventry University's online course, What is Economics in Global Logistics?. Join the course to learn more.
View course
2.13

The other extreme of market structures is a monopoly, which is a market of one supplier. This is the opposite of perfect competition, which has many suppliers. How does this affect the way the market behaves?

Like perfect competition, monopoly markets rarely exist in reality because there is always some form of substitute for a product or service available. Monopoly power refers to cases where firms influence the market in some way through their behaviour. Governments often try to break up and legislate to discourage monopolies, usually with varying levels of success.

Monopolies are not desirable because they influence prices and output, and there is no competition mechanism to control or influence their actions. They also erect barriers to entry and practice pricing strategies that prevent or stifle competition. Monopolistic firms may not pursue profit maximisation because the potential to make a profit would encourage unwanted entrants to the market. Often, monopoly is seen as a case of market failure, because resources are not being allocated efficiently by the market mechanism.

Monopoly markets have some key identifying features. Many firms want to exercise monopoly power such as setting prices too high to destroy competition, known as destroyer or predatory pricing, or to set prices regardless of supply and demand, known as price discrimination. Monopolistic firms may be inefficient due to a lack of competition, or they might be efficient because they have higher profits to spend on improving efficiency. There might be investment in research and development, because of a focus on innovation motivated by the promise of high profits. A high level of branding, advertising and non-price competition might be another sign of monopoly power. Finally, collusion with key industries might be possible to maintain monopoly position. An example is maritime shipping and the deep sea container market, as they dominate specific routes with bigger ships.

Let’s look at the graph of a monopoly market: 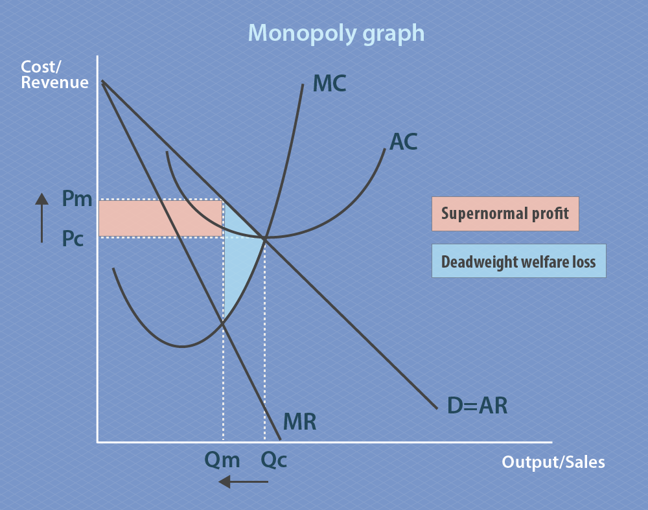 The AR (demand) curve for a monopolist is likely to be relatively price inelastic, opposite to the elastic demand in perfect competition. Output is assumed to be at the profit maximising output, where MC=MR, marked on the graph as Qc. Price and quantity are determined by the demand or AR curve. Remember, not all monopolists may aim for profit maximisation. Given the barriers to entry, the monopolist will be able to exploit abnormal profits in the long-run as entry to the market is restricted. Therefore supernormal profit is both the short-run and long-run equilibrium position for a monopoly.