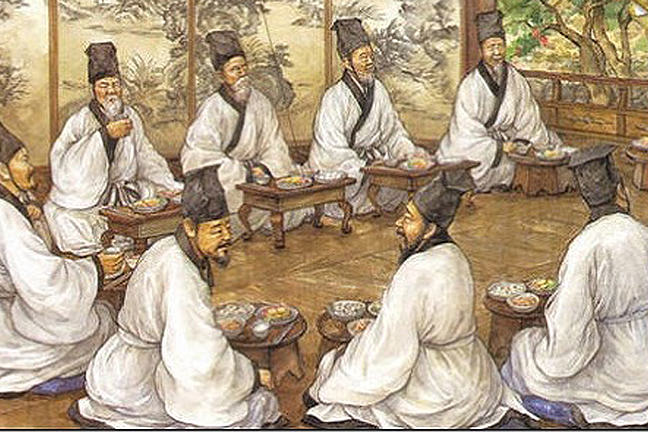 Neo Confucianism was extremely popular in Joseon Korea, and was even established as the state ideology.

The History of Neo-Confucianism

To learn about the Four-Seven Debate proper, let’s first talk about the history of Neo-Confucianism.

Centred around Confucian philosophy, an initial form of Neo-Confucianism was created in China in the 11th century, when Buddhism and Daoism began greatly influencing scholars’ interpretations of Confucian philosophy. This new school of thought was popularized by the Yuan Dynasty, which adopted it as the standard for their civil service examinations, and it continued to develop as it spread to the neighbouring countries of Korea and Japan. One of the most important scholars of this tradition was Zhu Xi, a pioneer who established most of the fundamental ideas of Neo-Confucianism.

Neo-Confucianism was introduced to the Korean peninsula in the late Goryeo dynasty, during the Yuan occupation. Soon thereafter, many Korean scholars would visit China and return with the intent of sharing Neo-Confucianism with those at home. As Neo-Confucianism was taken in and innovated upon, a uniquely Korean form of Neo-Confucianism began taking its hold in Korea, inciting debates on issues not seen in other countries. It became greatly popular among the scholars and the middle-class alike, and began pushing Buddhism out, eventually becoming the state ideology of Joseon Korea.

Neo-Confucianism is an extremely complex and deep field, but to put it simply, there are two core concepts: Li (principle), and Qi (psycho-physical force). Neo-Confucian scholars believed that all beings in the universe shared an “original nature” comprising all the principles in the world. Differences between individuals and types of beings came down to varying states of Qi within an individual, from turbid to clear, or thick to thin, which affects its expression of the Li. Hence, humans were seen to have to control and refine the Qi they were initially gifted with in life, in order for their Li to shine through, resulting in a proper understanding and appreciation of the world.