This content is taken from the The University of Newcastle Australia's online course, What Is Poetry? An Introduction to Literary Analysis. Join the course to learn more.
View course
1.6

What Is Poetry? An Introduction to...

0:07Skip to 0 minutes and 7 seconds As you see, the two stanzas of the poem are the same shape. So in each case we have a movement in and out creating the wings effect on the page.

0:23Skip to 0 minutes and 23 seconds If you look at the second stanza, we’ve got that same movement that the first one showed of going from size to smallness. Look at that central line, “I became most thinne” and that’s the moment where the poem itself is thinnest on the page - it’s most thin. “Still with sicknesses and shame. Thou didst so punish sinne, That I became most thinne.” Gradually, the poet himself has shrunk away under the force of what he has suffered; because of his sin. But, then he can grow. “With thee” - that’s the turning point in each stanza.

1:08Skip to 1 minute and 8 seconds We have this turning point from “Most poore:” to “With thee”. This is a prayer, remember. So, in each case, it’s God who is at the centre of the poem to change its turn from shrinking to growing. “With thee, Let me combine,

1:26Skip to 1 minute and 26 seconds And feel thy victorie: For, if I imp my wing on thine…” ‘Imp’ means like grafting. So, effectively he’s suggesting that he should grow himself into the power of God’s growth. And then, “Affliction shall advance the flight in me.” Again, it’s a paradox. The first stanza ended with the paradox of the fall furthering the flight, which was a common theological idea in the 17th century. The notion of the fortunate fall (that the expulsion, the error, of Adam and Eve eating the apple, leaving Eden) actually led to a good thing, which was the coming of Christ.

2:12Skip to 2 minutes and 12 seconds Herbert was himself a priest, and here we’ve got that idea, the fall will make a greater flight (it’s the flight of the soul) and again his affliction, his own personal suffering of sickness and shame, that is his affliction shall “advance the flight in me”. So, in each case, he grows out of what he has learned and the shape of the poem is what shows us this.

When a poem takes shape

Using the poem ‘Easter Wings’ by George Herbert, I’ve just shown you how a poem can not only get you to think of imagery, but that it can take visual form on the page as well. 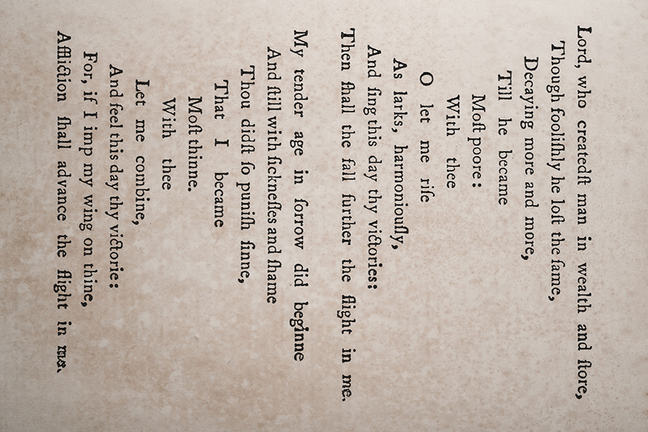 The original orientation and shape of the poem ‘Easter Wings’.

You can have a closer look at the poem in the linked file at the bottom of this step.

What’s your take on shape?

Have you ever seen a shaped poem before? How important is it what a poem looks like on the page?