This content is taken from the Health Education England's online course, Whole Genome Sequencing: Decoding the Language of Life and Health. Join the course to learn more.
View course
1.19

We all have the 'breast cancer gene' 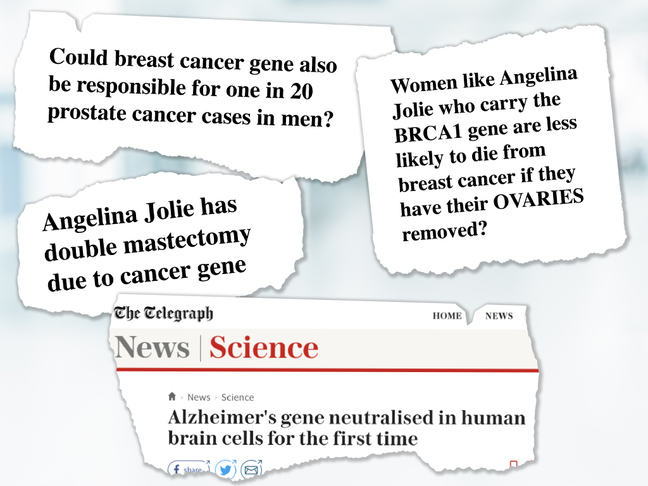 As we learnt earlier, a gene carries the information needed to produce a protein, but often when we hear genetic findings reported in the media, we are told of the discovery of a gene for a particular condition. For example, a newspaper headline published in the Daily Mail in April 2015 read: ‘Women like Angelina Jolie who carry the BRCA1 gene are less likely to die from breast cancer if they have their ovaries removed’.

Headlines such as these imply that there are two sets of people out there: those that have the BRCA1 gene and those that don’t. But this is a misconception: everybody has the BRCA1 gene, but there are many different variants, or alleles. It is the variant form(s) of a gene that makes someone more susceptible to disease, and not the gene itself.

The BRCA1 gene produces a protein that is involved in repairing damaged DNA. This damage can occur from everyday processes in the cell, such as when cells divide, or from environmental factors, such as UV light. As we know, if DNA isn’t repaired properly mistakes can occur in our genome that may result in diseases such as cancer. Individuals such as Angelina Jolie, who have a variant of the BRCA1 gene which produces a protein that is less efficient at repairing DNA, are at increased risk of genetic errors and therefore the chance of developing breast cancer (40-80%). An accurate headline would be: ‘Women like Angelina Jolie who carry a cancer risk variant of the BRCA1 gene are less likely to die from breast cancer if they have their breasts and ovaries removed’.

This is an example of a single gene that has a very strong effect on a single disease characteristic or ‘trait’ (in this case, predisposition to developing breast cancer). But, as we’ve learnt, in many cases, the relationship between genes (genotype) and observable characteristics of the individual (referred to as the phenotype) is more complex. Genes can interact with each other, as well as with the environment, and phenotype can be influenced by many genetic variants.

Why do we want to know about genomes?

Physiology: the Science of Life

Get an introduction to human physiology and the amazing systems in our bodies that keep us alive.

Learn how molecular genetic techniques are used to identify the genetic factors that contribute to the development of disease.