Each year, around 10 million newborns require some degree of resuscitation after birth such as tactile stimulation, or airway clearing or positioning1. In addition, over one million newborns with complications related to prematurity, such as respiratory distress syndrome, require assistance to breathe at birth2-3. More than 95% of babies respond to simple interventions such as drying, stimulation, warmth, suctioning, and ventilation with a bag and mask1-4. It is estimated that the training of birth attendants on basic neonatal resuscitation in low- and middle-income countries (LMICs) could avert 30% of intrapartum-related neonatal deaths13.

In 2010, the American Academy of Pediatrics and partners in the Helping Babies Breathe Global Development Alliance began disseminating the Helping Babies Breathe (HBB) programme, which is based on the International Liaison Committee on Resuscitation Consensus on Science and World Health Organization Guidelines on Basic Newborn Resuscitation6. HBB training focuses on peer-to-peer learning and enhancing skills on neonatal resuscitation through training courses of 1-3 days. The HBB programme is particularly meant for settings where a single birth attendant attends to mothers and newborns. The resuscitation protocol of the HBB programme (shown in Figure 1) calls for initiating bag and mask ventilation as soon as possible after birth, at the latest within one minute7.

By 2017, the HBB programme had been implemented in more than 77 countries, equipping hundreds of thousands of health service providers to carry out neonatal resuscitation8. Several studies have reported improved perinatal outcomes due to the implementation of the HBB programme10-12. We conducted a systematic review to evaluate the change in basic neonatal resuscitation practices (stimulation, suctioning, and bag and mask ventilation within 1 minute) following HBB implementation. 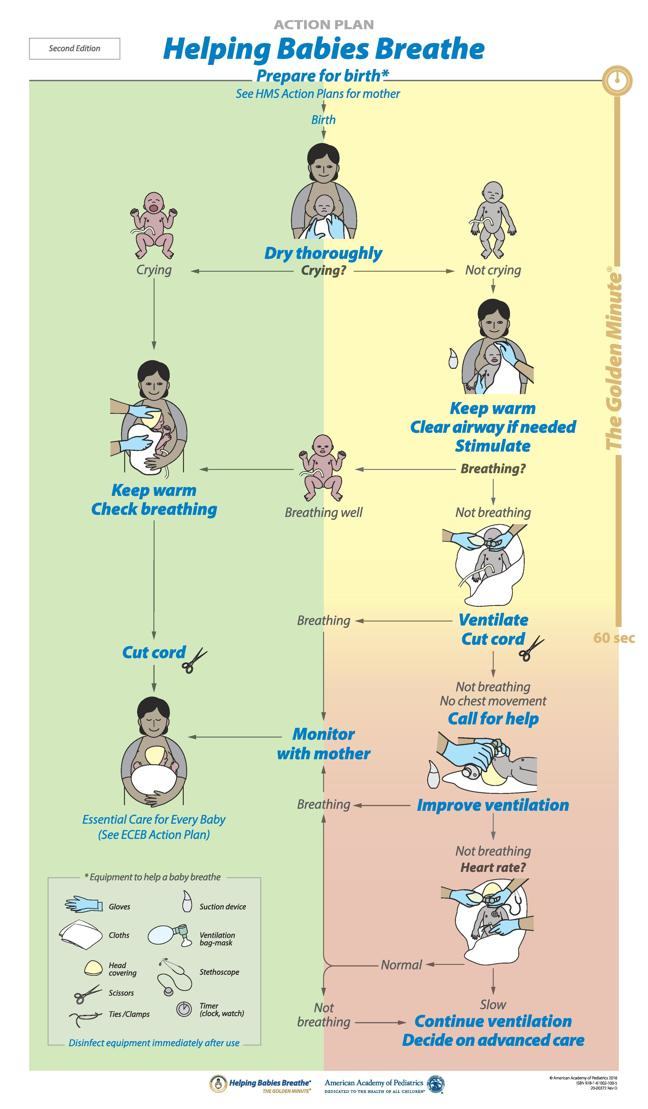 All the relevant peer-reviewed literature published between January 2010 and July 2018 that reported findings on neonatal resuscitation practices after the implementation of the HBB programme among health workers in LMICs were included. The selected studies included randomized controlled trials; cluster randomized trials; quasi-experimental studies (including quasi-randomized trials); controlled before and after studies; cohort; case control; and analytical cross-sectional studies. Studies conducted in high income countries and those reporting only the impact of other neonatal resuscitation guidelines or other interventions were excluded from the review.

Among the 58 records identified, four studies met the criteria for inclusion in the systematic review. These were observational before and after studies conducted in India and Kenya (Goudar et al.)13, Nepal (KC et al.)11, Sudan (Arabi et al.)14 and Tanzania (Msemo et al.)15. Overall, there was no statistical evidence for a change in use of stimulation, suctioning, or bag and mask ventilation among health care workers after implementation of the HBB programme. However, bag and mask ventilation was over twice as likely to be started within the first minute. 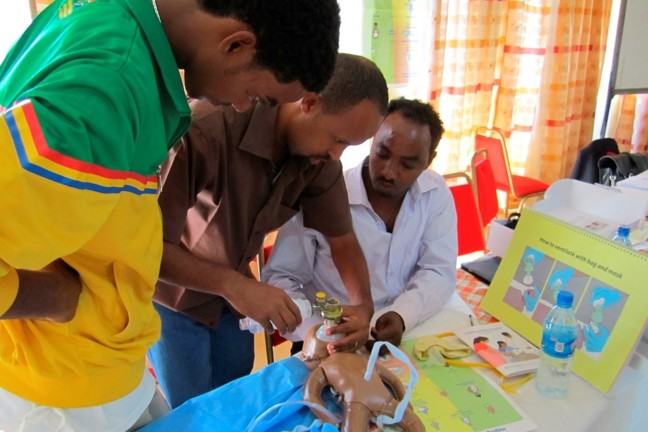 This review assessed the impact of the HBB programme interventions on neonatal resuscitation practices in the LMICs in Asia and Africa to understand the potential causal pathway for the reduction in fresh stillbirths and first day mortality reported in other studies. Among the several recognised risks of the HBB programme implementation is the overuse of suctioning and bag and mask ventilation leading to use of staff time that could have been utilised providing care for other babies. Overuse of these interventions may also risk injury to the newborn. However, there was no change in the rate of use of suctioning or bag and mask ventilation. If bag mask ventilation is indicated, one of the most important aspects of effective ventilation for non-breathing babies is to initiate it as soon as possible. This review did demonstrate an increase in early initiation of bag and mask ventilation, which may therefore be the key mediator of the effect of HBB on stillbirths and mortality.

HBB does appear to have an impact on early neonatal outcomes in the short term, however there is limited evidence of its impact on later neonatal outcomes and on longer term impact. This review suggests that the impact of HBB may be due to timely initiation of bag and mask ventilation. Further research is needed to establish whether skills learnt through HBB are retained in the longer term, and whether changes in practice and resulting improvements in early neonatal outcomes are sustained. This would help to guide the design of HBB courses and establish needs for refresher training to sustain the programme’s impact, as well as helping to guide decisions regarding scale up.