This content is taken from the London School of Hygiene & Tropical Medicine's online course, Improving the Health of Women, Children and Adolescents. Join the course to learn more.
View course
2.9

The source of a family planning method is very closely related to the type of method used, and whether it is traditional or modern. The vast majority of traditional methods do not require a formal provider, with some exceptions such as folkloric methods, herbs and beads. Modern methods, on the other hand, are commodities that need to be purchased or obtained, e.g. buying a packet of condoms from a pharmacy. Some modern methods require both a commodity and a certain level of clinical skill from a health worker, such as an implant insertion.

Due to the variety of methods available, examining where people obtain modern contraceptives needs to take into account the clinical nature of the different providers. A clinically-trained health worker based in a health centre can provide a wide range of contraceptives, spanning from condoms to IUDs and possibly even sterilisations. However, while condoms can be purchased without prescription from a roadside kiosk, this kiosk will not be able to provide clinical methods, such as injections or implants.

Public sector providers include locations such as government hospitals, government health centres, and public community health workers. Usually these providers are under the direct control of the Ministry of Health and may provide family planning services for free or for a reduced fee. On the other hand, private-sector providers operate outside of the governmental health system, and can include a variety of providers, such as for-profit hospitals, clinics and pharmacies, not-for-profit providers including non-governmental organisations and faith-based (mission/church/mosque) organisations, as well as non-medical sources such as general stores, vending machines and youth support clubs.

Understanding the relative importance of the various providers can bring useful insights for guiding development of strategies to reduce unmet need for family planning. Additionally, such understanding can lead to uncovering issues related to continuous contraceptive method availability and the cost of this provision, both to the health system as well as to the couples using the methods.

Recently, a large in-depth analysis of data from 57 low- and middle-income countries in four regions (Sub-Saharan Africa, North Africa/Middle East, Southeast Asia and Latin America & the Caribbean) examined where users of modern contraceptives obtained their current method. The data were collected in Demographic and Health Surveys, which are large-scale population surveys conducted in dozens of countries across the world. 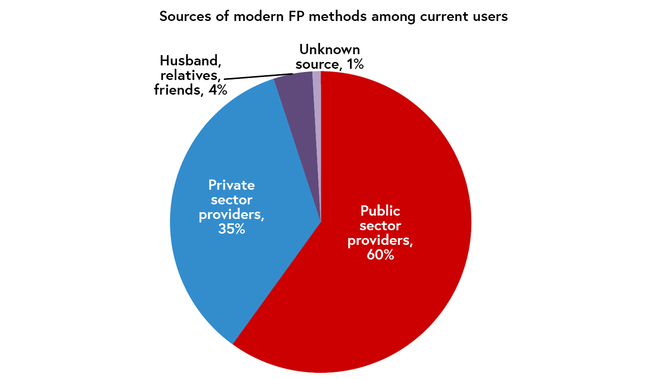 When the providers’ clinical capacity was considered in addition to whether they were public or private, eight different provider categories emerged. Figure 2 shows each of these eight categories plotted to so that providers with more clinical skill appear to the right of the chart, and private providers appear at the top of the chart. The size of each circle represents the number of users in each category and therefore the category’s relative importance: 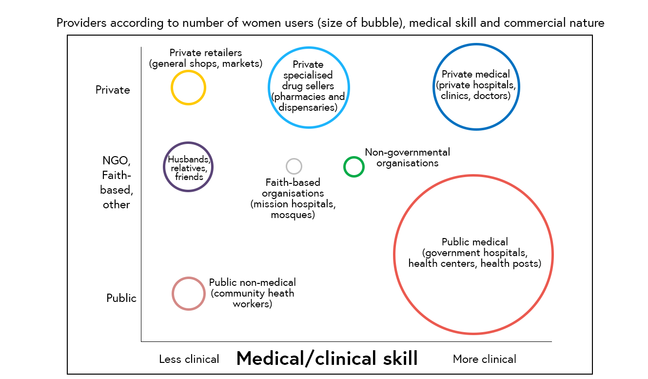 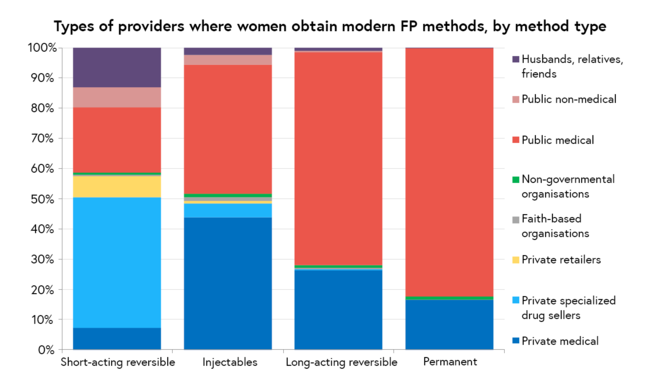 How do you think health systems in low- and middle-income countries can use existing family planning method providers to ensure that consistent, accessible, affordable and high-quality family planning services exist with a wide range of method options for all women, men and couples that seek to avoid pregnancy?