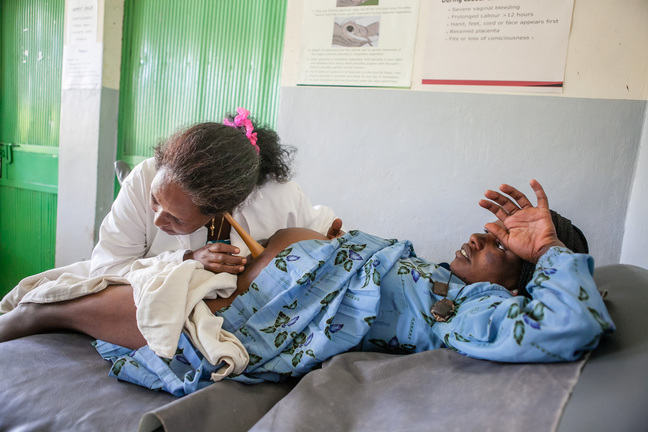 In previous steps we have described the burden of maternal deaths around the world and what can be done to prevent these deaths and complications. We will now look at antenatal care, its purpose, and what can or cannot be achieved by mothers receiving it.

What is antenatal care?

The care a pregnant woman receives from a healthcare professional over the course of her pregnancy is referred to as antenatal care (ANC). It is used to detect early signs of complications, followed by a timely intervention if any are found. This care also focuses on educating the pregnant woman on a range of topics, including well-being, birth preparedness, complication readiness, and breastfeeding.

ANC has been recommended by the Ministry of Health in the UK since 1929. The recommendation for care is as follows:

During these visits the healthcare professional measures uterine height, checks foetal heartbeat, tests urine, and measures the mother’s blood pressure. This same structure of ANC has been adopted worldwide, and has been adapted today within the Focussed Antenatal Care (FANC) approach, endorsed by the World Health Organisation (WHO) in 2002. FANC is a goal-oriented ANC approach that promotes the health of mothers and their babies through targeted assessments of pregnant women to facilitate: 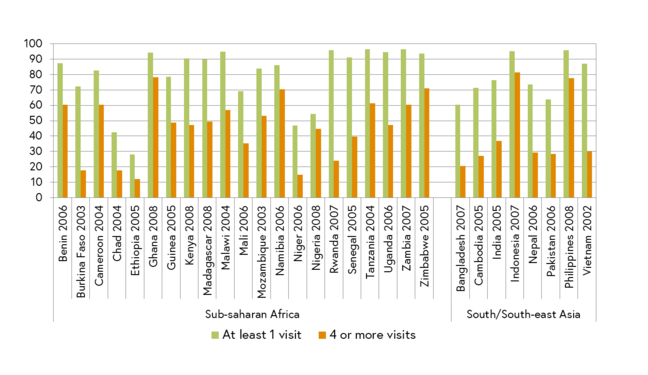 ANC is thought to prevent high-risk complications in pregnancy, but evidence for this is lacking for many outcomes. It is unlikely to impact on some major causes of maternal mortality, such as haemorrhage and obstructed labour. These types of emergencies are prevented through prompt recognition and emergency care, which antenatal care does not provide. It does, however, aim to educate the woman on recognising signs of these types of complications, which can help to save their lives and promote birth preparedness. ANC also provides effective interventions for preventing and treating certain conditions, such as anaemia, pre-eclampsia and eclampsia, external cephalic version to correct a breeched position, and infections, some of which impact on the health of the newborn as well as the mother, e.g. malaria, HIV, tetanus, syphilis, gonorrhoea, bacteriuria. Dowswell et al. state that “It is reasonable to assume that antenatal care does confer some health benefits, although how it does so may be complex and multi-factorial”.4

Learn how to evaluate a company’s financial performance to determine acquisition opportunities.