Why do you think the First World War started?

Some of the answers you or others may have thought of might have been:

All of these, and many more, are legitimate and valid answers to why war broke out in 1914.

The immediate cause of the war can be found in the summer of 1914, during the so-called ‘July crisis’. Archduke Franz Ferdinand was the heir to the Austro-Hungarian throne. In the summer of 1914, he and his wife Sophie travelled to Bosnia, a province of the multinational Austro-Hungarian Empire. On Sunday, 28 June, the couple were assassinated in the capital, Sarajevo, by Bosnian-Serb nationalists.

To understand the importance of this event, imagine the current heir to the UK throne, Prince Charles, and his wife being assassinated while visiting Northern Ireland. The assassination threatened the integrity of the Austro-Hungarian Empire and its Emperor, and potentially weakened the country in the eyes of others.

This outrageous act of brutality aimed to undermine Austria–Hungary, which had annexed Bosnia into its multi-ethnic empire in 1908. The assassination is often seen as the spark that would set light to a continent riddled with international tensions.

However, a European war was not inevitable. Right until the last moment, some European statesmen, such as the British Foreign Secretary Sir Edward Grey, were desperately trying to avoid an escalation of the crisis by advocating mediation. Others, including the German and Austrian Chiefs of the General Staff did everything they could to ensure that a war would break out.

This assassination precipitated the July crisis: five weeks of diplomacy and decision-making across the continent – far away from Bosnia – that ended in the outbreak of the First World War. But quite how and why the deaths of Franz Ferdinand and Archduchess Sophie would lead to the deaths of millions has always been a difficult question.

One reason why the crisis escalated was that Europe’s so-called Great Powers were in alliances that pitted one side against the other. Germany, Austria–Hungary and Italy formed one alliance; France and Russia formed another. More complicated still, France, Russia and Britain were also in an ‘entente’, a more informal agreement to support each other in times of war. The map illustrates the alliance system that existed in the summer of 1914. Why do you think Germany might have considered itself ‘encircled’ by hostile powers? 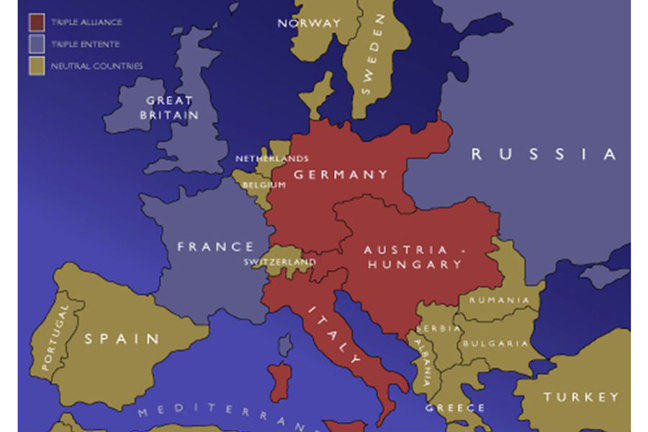 The alliance system that existed in the summer of 1914. © Publisher unknown

The map shows Germany in the centre of Europe, with potential enemies on either side. This is why Germans felt ‘encircled’ by hostile powers. Only Austria–Hungary was a reliable ally. When the heir to Austria–Hungary’s throne was assassinated by a Bosnian Serb, its government called on its friends in the German government for support. They suspected – but could not prove – that Serbia was behind the assassination and wanted revenge. When Germany promised to support its ally Austria–Hungary, this meant that France and Russia would become their enemies. This was mainly because:

Look at this contemporary cartoon and consider how what you’ve learnt of the alliance system is reflected by the cartoonist: 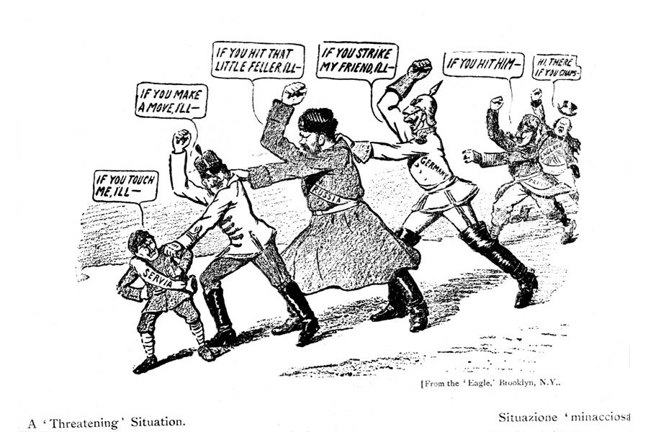 This cartoon is a humorous take on how a conflict between Serbia and Austria–Hungary (on the left) escalated to involve all the major European powers, with the actions of one triggering the reactions of another. The cartoon attempts to depict the confusing circumstances that meant that nobody quite knew why their country was at war in 1914. For example, why did the assassination in Serbia and the resulting conflict between Austria–Hungary and Serbia lead to Britain going to war against Germany in August? It was as difficult to fathom for contemporaries as it is for us today.