Find out more
Home #FutureLearnAsks: find out how to break into filmmaking
Published on June 25th, 2015

David Thair, FutureLearn’s Social Lead, introduces our next big Twitter chat, which focusses on how to break into the filmmaking industry.

Each #FutureLearnAsks is a chance for you to discuss and debate a big topic with leading experts and other learners, outside of the confines of a FutureLearn course.

We love to hear from people all over the world, so we can all learn from your unique experiences and opinions. So far we’ve discussed subjects as diverse as cyber security, community journalism, East Asian politics and songwriting.

Join the next #FutureLearnAsks on 2 July 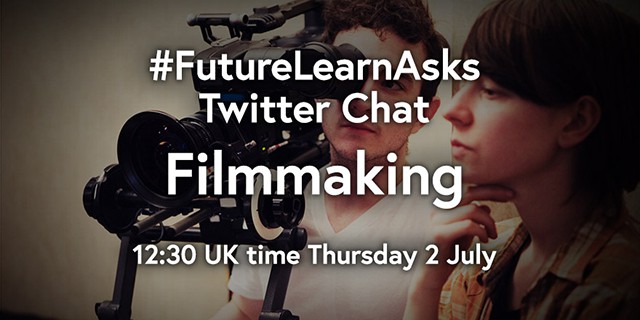 For our next chat, we’ll be talking about the art of filmmaking and, more specifically, how you can break into this exciting and creative industry. We’ll be joined by some of the best young talent and new entrants into the filmmaking world right now.

They’ll be able to answer your questions about getting a foot in the door and the range of specialisms available – from writing and editing to filming, directing and producing.

Jon Wardle
@JonWardle
Jon is lead educator on Explore Filmmaking: from Script to Screen, and Deputy Director and Director of Curriculum and Registrar at the National Film and Television School (NFTS).

Hope Kemp
@HopeLDN
Hope is a cinephile and freelance filmmaker. She was recently named as an IntoFilm and EON Productions “One to Watch” Director in 2015. She’s a graduate of the NFTS and British Film Institute (BFI) Talent Campus.

Mustapha Kseibati
@TashCurly
Mustapha is a commercial British filmmaker, having made shorts with the BBC, SKY and BFI. He’s passionate about films that have action, comedy and heart.

Adeyemi Michael
@AdeyemiMichael
Adeyemi is a Director, Producer and Cameraman. He has an MA in Documentary Directing from the NFTS and is a winner of Channel 4’s Black History Month film-making competition.

Andrew Oldbury
@AndrewOldbury
Andrew is an award-winning film producer, who’s worked on some of the largest UK TV dramas including “Coronation Street” and “Holby City.” He’s currently studying for a Masters in Producing at the NFTS.

For an hour starting at 12:30 GMT+1, FutureLearn will tweet questions from @futurelearn. You can then respond to these questions by including #FutureLearnAsks in your tweets.

Each question will be numbered Q1, Q2, etc, so when you respond, you should include the number in your answer. E.g.

A2 This my answer to question 2. #FutureLearnAsks

You’re also encouraged to reply to other people’s tweets, and the guest contributors will be joining in too.

FutureLearn will retweet some of the most interesting contributions, and generally help to facilitate the conversation. We’ll create an archive of the discussion and share it after the event.

What to do now

Remember to put the time and date in your diary! And if you’re planning to take part, you could use the hashtag #FutureLearnAsks to introduce yourself right now.