Find out more
Home Get into Coding: Meet the groups coding for good
Published on September 15th, 2020

Find out more about three non-profit coding organisations helping disadvantaged groups to get into web development and find jobs in tech. 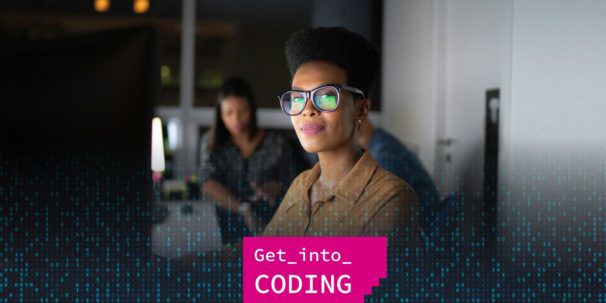 There’s no doubt that the tech industry is booming and a job as a developer is one that will see you through 2020 and beyond. However, getting into coding isn’t straightforward for everyone and work opportunities in the tech industry aren’t always accessible.

In celebration of National Coding Week, we’re showcasing three not-for-profit coding organisations which support under-represented groups to get into web development and help them to find jobs in tech.

CodeYourFuture, Coding Black Females and Kodiri are working hard to provide opportunities for their members to develop the technical coding skills they need as well as the confidence and know-how to find great jobs in the tech industry.

Read on to find out more about them and hear how they’ve empowered their members with the tools, skills, and support to start their coding careers.

A non-profit organisation started in 2017, CodeYourFuture (CYF) was started as a way to train and upskill some of the most socially-excluded people within society across the UK — including refugees, ethnic minorities, people living below the poverty line, single mothers, and ex-prisoners — and help them achieve a career within the ever-expanding tech industry.

The organisation is envisioned as a replicable model that could be adapted by social entrepreneurs all over the world, to help change the lives of people who might otherwise not get the chance to learn to code.

Students are trained in full-stack web development by professional developers from all throughout the tech industry and are able to develop their product development skills of tech products throughout the entirety of their course.

CodeYourFuture Graduates have gone on to work in leading UK companies like the BBC, STV and Ticketmaster, as well as startups such as Adzuna, Sensible Object, tlr and WeGotPop.

Even though CodeYourFuture is just shy of three years old, there have already been many graduate success stories.

Madiha originally came to the UK from Pakistan over 15 years ago. After years of juggling jobs to make ends meet, she decided to turn her life around and have a fresh start. She found CodeYourFuture which proved to be life-changing for her, giving her the skills she needed to find a job she loved and rebuild her confidence.

Now working as a Software Engineer for an IT company, Madiha explains:

“I was so well supported throughout the entire learning process. I was a bit scared at first and CodeYourFuture was the best environment in which to learn. My mentors made sure I was getting the skills I needed, but also really helped to build my confidence and how to deal with stress and pressure”.

“Some of the students come from a really vulnerable background. They had to flee their countries from persecution, conflicts, and so on. For most, life was a constant emotional rollercoaster. But thanks to CodeYourFuture, they could also turn their lives around.  It’s such a nice feeling to know that there is help out there”.

“Tech is really powerful and being used in really interesting ways by lots of different industries” – Siobhan Baker, a member of Coding Black Females

The non-profit organisation, Coding Black Females, was founded back in 2017 as a way to provide opportunities for black female developers to develop their careers, showcase their talents, get the support they need, and help build solid relationships through regular meet-ups and a supportive online community.

The group showcases the talent of many black women currently working within the coding industry and aims to empower the next generation who are just entering the world of work.

As well as supporting its members through regular meet-ups, Coding Black Females also aims to inspire organisations to proactively improve their hiring practices and work cultures so that they are more inclusive, fair, and diverse.

Siobhan Baker is currently a Software Engineer with a consultancy called 8th Light and volunteers on the Coding Black Females’ leadership team.

Siobhan’s journey to software development began with a free coding course taught by a social enterprise called Code First Girls, whose primary aim is to get more women into tech and entrepreneurship.

In 2016, Siobhan spent two hours per week for eight weeks learning the basics of HTML and CSS in order to build her first website. Initially, she signed up for the course thinking coding would just be something “nice to learn”. Little did she know that it was the start of something more and would change her life.

Looking back on that first project, Siobhan says that there are “numerous things that I would now change and improve! However, it serves as a reminder of where I first started. Everyone and anyone can learn to code, and you’re always going to be learning and growing as you go along”.

Kodiri is a coding platform where developers from all around the world learn the most popular programming languages by playing games against each other, from Beginner to Expert level.

It has a special focus on helping underprivileged and underrepresented communities and is available completely free for mobile and desktop devices.

Kodiri also runs one of the largest tech groups on Meetup where they celebrate social events on a monthly basis, alongside partners like Vodafone, Oracle, and Trainline.

Founder of Kodiri, Ricardo Mallols, says that Kordiri encourages developers to build both hard and soft skills: “The coding industry is huge and rapidly changing. Many aspiring devs purely focus on their hard skills, underestimating the importance of proving attitude and motivation towards facing new challenges while being part of a team”.

Kodiri has already helped hundreds of aspiring developers to build their tech skills from scratch. Many of them are now professional programmers across some of the most reputable tech companies worldwide, including Google and Sky TV.

Tom Hodson is now an Associate Software Developer at Sky and had no coding experience before joining Kodiri:

“Before starting at Kodiri I had never written a line of code before. In just 2 months, Kodiri helped me to secure my new role as a Software Developer at Sky”.

If you’d like help getting into coding, all three of the above groups are open for you to either apply to join or join straight away. FutureLearn also offers a range of free coding courses. You can browse them all here and start learning for free today.