Find out more
Home How to make New Year’s resolutions that work
Published on December 22nd, 2021

Learn how to set goals for the year ahead and avoid the mistakes people make when trying to enact changes. 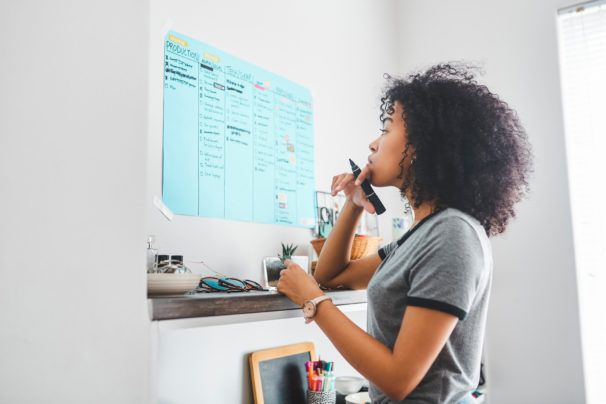 Whenever a new year ticks over, many people around the world decide it’s a good time for a fresh start, usually by making New Year’s resolutions. However, some figures suggest more than half of all resolutions fail. Here, we look at ways you can make lasting changes to reach your goals.

As well as looking at some New Year’s resolution ideas, we’ll look at why people fail with them, how you can make yours, and how to stick to them. Get ready to put your best foot forward.

To many, there is a certain appeal about making a change at the start of the new year. New beginnings often signal a time for a fresh start – a chance to put past mistakes behind and look to the future.

Having an entire year ahead can feel like a blank slate, full of opportunity and potential. People also feel a sense of control when they plan sweeping changes for the new year.

There is also an element of tradition. As we’ll see, people have been setting resolutions for many generations, so there is a certain cultural element for some people.

However, all of these factors mean that there is often a lot of pressure on people to make these changes, which can be one of the reasons why there’s such a high failure rate.

When did New Year’s resolutions begin?

The recorded history of New Year’s resolutions dates back to the ancient Babylonians. As many as 4,000 years ago, the Babylonians held celebrations to bring in the new year and the planting of crops. They reaffirmed their loyalty to the king while promising to pay their debts and return borrowed items in the hope to earn favour from the gods.

History also shows us that the Romans had similar practices, and they eventually moved the calendar around so the year started on January 1st. This coincided with the celebration of the god Janus, who looked back on the previous year and ahead to the future. The Romans made promises of good conduct for the year ahead.

While the concept of making resolutions for the new year is mainly a Western practice, other countries have similar ones. For example, in Japan, some people practise Kakizome, where they write their goal for the year ahead in ornate calligraphy.

Despite its ancient roots, many people still make resolutions each year. For example, according to one survey, 44% of people in the UK planned on making resolutions for 2021.

Why do New Year’s resolutions fail?

A quick internet search will show various figures for the failure rate of resolutions. Whatever the result, it’s usually pretty high. So why are people so bad at completing their yearly goals?

There are a few potential reasons:

What are the best New Year’s resolutions?

Finding the ‘best’ resolution is, of course, an entirely subjective process. What works for you may not work for others, and vice versa. Determining what success looks like for you is a useful place to start.

As we’ll see, when it comes to setting goals for the new year, there are certain things you can do to make them as useful as possible. To set effective goals, you should:

Now, let’s look at some of the ‘most popular’ resolutions often reported. These are taken from various sources and are by no means a completely accurate measure:

The lists go on in this fashion. Can you tell why so many people fail? Many of these aren’t specific, measurable, or have time frames attached to them. It’s hard to make any real progress towards them because of this.

How to make New Year’s resolutions

So, let’s focus on how you can set your own resolutions for the year ahead. First, let’s go back to effective goal setting to get started.

As explored on our open step from Goldsmiths, University of London, there are five principles of goal-setting:

So, going back to one of the ‘best’ examples outlined above, let’s turn it into a more meaningful one – exercise more.

Instead of the relatively vague statement, let’s first make it specific. An adult’s recommended amount of exercise is at least 150 minutes of moderate aerobic activity or 75 minutes of vigorous aerobic activity a week. This is a good starting point.

Next, let’s make it measurable and attainable; complete at least 150 minutes of moderate exercise each week in January. Again, there are various ways you can track your progress on this, and it’s a relatively small period of time to start with.

Your resolution also needs to be relevant to your life, so you may have a bigger goal in mind. For example, you might challenge yourself to complete a 10km run by April. This gives you a firm timescale, as well as the chance to make incremental progress towards your goal.

By building your resolution this way, you can have a clear goal with a motivating amount of challenge. You’re also showing commitment to the resolution by giving a firm date, and allowing the chance for feedback on your progress in case you need to adjust.

Now that you know how to set resolutions that you’ve at least got a chance of sticking with, you might need some inspiration on what goals to set. Below, we’ve put together some examples of New Year’s resolution ideas that can get you started:

You can tailor these examples to your goals and lifestyle or use them as a basis for something entirely unique to you. The main thing is that you’re committing to a clear action within a specific time frame, with a framework for how you’re going to achieve it.

How to stick to New Year’s resolutions

Of course, just because you’ve got a solid resolution doesn’t mean that you’re automatically going to succeed. As with many changes in life, it takes time and effort to see the results. So how can you stick to your New Year’s resolutions?

There are several elements to bear in mind when it comes to sticking to your goals. Here are a few quick wins:

The importance of a growth mindset

Perhaps one of the most important aspects of setting a New Year’s resolution is to have a growth mindset. If you’re not sure what that means, let’s take a definition from our open step on study techniques.

‘With a growth mindset, you increase your belief in the effectiveness of your own efforts – and thereby your actual chance of success.’

Studies have also shown that those with a fixed mindset are more likely to quit when facing hurdles and setbacks because they don’t feel they have the natural ability to succeed.

On the other hand, those with a growth mindset believe that they can learn and grow. They recognise that effort, careful planning, and ongoing learning can all outweigh natural ability when it comes to achieving success.

Having a growth mindset means recognising that gradual progress is attainable through effort. It also means seeing mistakes and failures as opportunities to learn and seeking out opportunities to challenge themselves to do better.

When it comes to sticking to New Year’s resolutions, this type of growth mindset can be a huge help.

So, as the new year begins, you may find yourself ready to start making resolutions for 2022 and beyond. If so, you’re hopefully now better prepared to make clear and measurable progress that can help you reach your goals. Whatever the year ahead holds for you, we wish you luck!