Find out more
Home Making a MOOC in Web Science: Changing the World, Bit by Bit
Published on November 7th, 2013 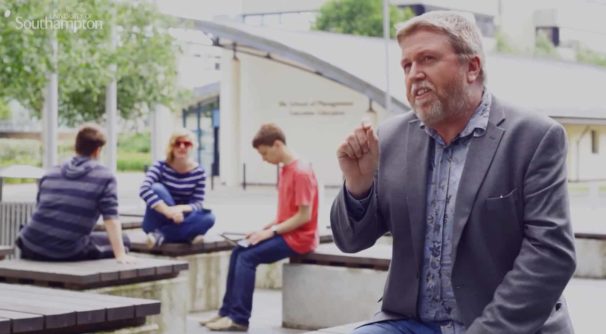 Professor Leslie Carr talks about the inspiration behind the University of Southampton’s ‘Web Science’ MOOC and what you can expect in the course which starts on 11 November.

About 10 years ago researchers at the University of Southampton started to notice two things: firstly, the web seemed to be getting into more and more aspects of our life – retail, media and government, to name just a few – and secondly that it was being ignored by the academic research community as if it were just a teenager’s computer game. Noticing that there were legal storms starting to brew about intellectual property, copyright, privacy and cybersecurity on the Web, we launched a research initiative with MIT in the US in 2007. We called it “Web Science” because we wanted to emphasise that it was about understanding the way that the technology of the web interacted with society and interfered with the economy, rather than “how the Internet works” or “how to build websites in HTML”.

Six years later at the University of Southampton we have created undergraduate and Masters degrees in Web Science; a cohort of 50 postgraduates researching Web Science; an Institute of Web Science that draws experts together from sociology, psychology, economics, maths, computing, art and the humanities; and also a network of Web Science research laboratories in universities across the world.

…And now a MOOC. We wanted to increase the amount of understanding about the Web because it’s important that people understand issues like privacy. We tried to bring together all the talented people who have been teaching our students, and for each of them to put together some learning experiences that everyone could benefit from.

In our opening week, we’ll be asking about how the web got invented (hint – it took over a 100 years). We’ll also be looking at the kinds of use that we make of the Web, and the different ways it is used around the world. MOOCs themselves are a great example of the sort of things that web scientists discuss. Will providing free courses to the whole world make universities bankrupt? Or will it make higher education more effective?

It’s been so exciting putting together this MOOC, especially trying to plan how to communicate with thousands of people. Here are some of the ways:

(1) I’m looking forward to meeting everyone online when the course begins on 11 November. There will be commenting and discussion opportunities around every activity.

(2) The course leaders and facilitators have been blogging at http://moocs.southampton.ac.uk/websci/

(5) There’s an opportunity for a face-to-face meet up (moocup?) at Southampton on Nov 18th – if you’d like to come and talk to us in the flesh then register at http://webscimooc.eventbrite.co.uk/